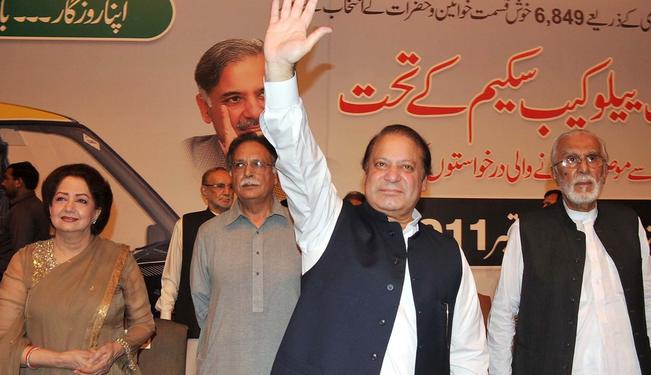 Sharif is best suited to lead Pakistan out of the current situation, but he will have to make a clean break with the legacy of corruption and right-wing appeasement, argues Ishtiaq Ahmed.

Nawaz Sharif’s Pakistan Muslim League-Nawaz (PML-N) won most votes and seats in the May 11 Pakistan general election. Partly, this derives from the first-past-the-post system that favours the big, established parties. The counter-argument that Imran Khan’s Pakistan Tehreek-e-Insaaf (PTI) would produce an upset was popular among the media 'analysts'. That the Pakistan People’s Party (PPP) would be punished for failing to provide good and effective government proved to be true. So, how do we explain the two surprises?

I would like to draw upon class analysis on an historical-comparative basis. The key province is always Punjab. The year is 1937 when the Indian National Congress, under the leadership of Jawaharlal Nehru, announced that the zamindari system and big landlordism would be abolished if his party came to power. It produced a reaction among the Muslim landowning classes, which flocked to the Muslim League — a process that gained momentum in 1944 and paid rich dividends in the 1946 election, when the Muslim League became the refuge of the landlords and the Punjab Unionist Party was sidelined because the British had abandoned it in favour of the Muslim League. Has something of that sort happened this time? Yes, though in a different way.

The landed gentry were already behind the PML-N and stayed put while the Pakistani establishment did nothing to alter that. Moreover, this time the propertied classes were all Muslim by religion, and therefore, not divided between the bourgeoisie, which in 1937 was entirely Hindu and some Sikh, while the landlords were almost entirely Muslim. In comparative terms, Khan proved to be the Nehru of 2013 and the propertied classes punished him in a more effective manner because they were a united force.

But hold on. How do we explain that in 1970, the PPP succeeded in defying and defeating the formidable landowning and bourgeois classes of Punjab and triumph so massively? Bhutto’s PPP was a party of the poor, urban and rural, the petty-bourgeoisie and radical intellectuals. Its appeal was not about taxing the rich while maintaining the shape of society more or less as it was, but in a promise to abolish the old order altogether and usher in one based on Islamic socialism. We all know that Bhutto did not mean all that, just as the Muslim League had no intention of introducing an Islamic order free from exploitation when it won Muslim votes in 1946. That is, however, another matter. I think Khan was more honest with regard to his intentions and objectives, but in politics honesty is not always the best policy.

I remember in December 1970, we were campaigning in Gujrat on behalf of the PPP’s Syed Amir Hussain Shah. As was standard practice, we visited many villages meeting the notables and then moved on. The wind was blowing in our favour and we were elated. In one place, we were stopped by a crowd and a young man said: “Sahnoo pata hai keh tussi chaudhrian val hee jao ge, te sade jesey gharibaan val nahin aao ge par assi vote Bhutto sahib nu hee dena hai” (We know you will visit only the landlords in the village and not visit us poor people, but still we will vote for Bhutto). For someone like me from Lahore, this was a revelation. I noticed that the poor population in all villages lived separately and comprised artisans and landless labourers. They always clapped and waved but were taken for granted by us, and therefore, neglected.

It was the urban and rural poor and radical students like us who believed that Sahir Ludhianvi’s ‘Wo subha kabhi to aye gee’ was about to dawn. I remember running alongside Bhutto’s truck from the Lahore Railway Station through Mcleod Road, Beadon Road and up to the Governor’s House. Had he continued further I am sure on that day I and hundreds — in fact thousands like me — would have continued running. What happened subsequently, we all know. The left, deluding itself that a revolution was on the way, launched industrial strikes that included gherao and kabza (encircle and capture) actions. Bhutto responded with police repression and opened the doors to the landowners. Islamic socialism was stymied.

Khan’s PTI ‘tsunami’ was confined to the urban youth, unfairly described as the McDonalds-oriented upper middle class. I think the PTI’s support was much broader, but Khan failed to break through into the rural areas. Without the village poor being motivated and mobilized, the essential numbers needed to repeat 1970 were not there. Khan dominated the election campaign and represented the anti-status quo aspirations, but his mass base was much narrower than what Bhutto galvanised in 1970. The PTI and other parties as well have lodged complaints about rigging, and that can, in principle, mean a shift in the final distribution of seats, but it will not alter the result in any meaningful way.

In other parts of Pakistan, the politics of ethnicity prevailed. Interior Sindh voted for the PPP, while Karachi and Hyderabad for the Muttahida Qaumi Movement. In Khyber Pakhtunkhwa, Khan’s Pakthun ethnicity was a help. His playing footsy with the Taliban and the Awami National Party’s dismal performance in office amid allegations of mass corruption compounded by the Taliban’s terrorist campaign against it, benefited the PTI. In Balochistan, the result is more varied and even the PML-N has found a foothold in that province. Some of it has to do with the ethnic plurality between, on the one hand, Pakhtuns and, on the other, the Baloch-Brauhi groups and the strong influence of the Islamist Jamiat-e-Ulema-i-Islam-Fazl.

On the whole, I think it is good that Sharif won the election. He is best suited to lead Pakistan out of the current mess, but in order to do so he will have to make a clean break with the legacy of corruption and right-wing appeasement.

*[This article was originally published by the Daily Times.]