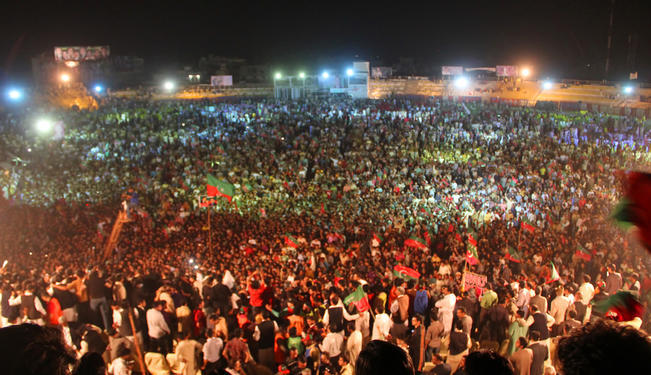 In its 66 years of existence, Pakistan has been far from democracy and nowhere near a beacon of Islam.

In a recent Fair Observer article, Pakistan: Democracy in a Confessional State, Dr. Ishtiaq Ahmed states: “There is no denying that the erstwhile modernist Pakistani leadership tried to make Pakistan both democratic and Islamic. However, no constitutional formula could find the proper balance.” As is the approach of the Pakistani establishment in general, Ahmed is very tepid in identifying the fault lines that underlie the country. It has hardly been a case of finding the proper balance; it has been an imbalance of gigantic proportions. In its 66 years of existence, Pakistan has been far from democracy and nowhere near a beacon of Islam.

In Pakistani leadership and society at large, there has been far too much obfuscation and sweeping of bitter truths under the carpet.

Let's begin with the birth of Pakistan in 1947 and the so called vision of its founder, Mohammed Ali Jinnah. The Pakistan movement was meant to be for the "protection" of Muslims of the sub-continent from Hindu domination. Ironically, however, Pakistan was created out of regions where the Muslims were already in overwhelming majority and were in no need of that much vaunted protection. In effect, Jinnah and his Pakistan movement compatriots gave themselves the power and patronage of a new state, while leaving 30 million Muslims (now 180 million) abandoned as an even smaller minority in Hindu majority India. Amazingly, as early as 1950, Pakistan went on to ban any further migration of Muslims from the rest of the sub-continent into Pakistan. The very raison d'etre of Pakistan was violated. The ban continues till today. In comparison, even tiny Israel welcomes all Jews to its bosom, anytime from anywhere in the world — of black, brown, or white color.

The lack of liberal and tolerant DNA continued to be demonstrated in the treatment by Pakistan of Bengalis in East Pakistan — arrogantly considered inferior citizens and lesser Muslims. Bengalis were denied political power, their cultural aspirations were crushed, and the Bengali language was denied national language status despite Bengalis being the majority community in "democratic" Pakistan. The Bengalis rose against their oppression by West Pakistan and this culminated in the genocide of an estimated three million Bengalis by the West Pakistan Army, prior to the liberation of Bangladesh in 1971. Till today, Pakistan has shown little sense of remorse for this episode.

The "Pakistan Resolution" of 1940 had envisaged the creation of two independent states — East Pakistan and West Pakistan — autonomous and sovereign. In April 1946, however, Jinnah manipulated a material shift whereby the two zones would constitute a single state of Pakistan. Indeed, the seeds of Pakistan's 1971 dismemberment had been sown by Jinnah himself in 1946.

Since the 1971 war of Bangladesh, an estimated 300,000 Bihari Muslims remain in ghettoes in Bangladesh — ostracized for having sided with the West Pakistani regime in the 1971 war of liberation. Poignantly, while marooned in Bangladesh, they raise the Pakistani flag and sing the Pakistani national anthem on Pakistan's national days. Yet, Pakistan has not allowed these loyal fellow Muslims into their country despite repeated promises by Pakistani prime ministers to repatriate them to Pakistan.

Those who are not contrite about their own transgressions are condemned to re-inflict them. It should not surprise anyone that the nation which betrayed Indian Muslims in the late 1940s, Bengali Muslims in 1971, and Bihari Muslims in the decades that followed, is now betraying its own "Muslim minorities" — Shias, Ahmadis, Hazaras, and Sufis.

The circumstances of Pakistan’s birth, as Dr. Ahmed states, dictated that: “It is well-nigh impossible to exclude Islam from defining Pakistani national identity.”  He goes on to articulate the irony that “a ‘Muslim nation is not a self-evident truth,” given the many divisions and sub-divisions within Islam in the sub-continent.  So Pakistan needs to ask itself the question: did its founders fail to recognize this basic reality ? And how did 66 years of its leadership since partition, fail to resolve this anomaly ? Or is it the bitter truth that merely contemplating this anomaly will begin to render partition of the sub-continent a fruitless tragedy — an irreversible accident of history ? Did partition serve the interests of Islam or did it serve only to fragment, and thereby debilitate the Muslims of the sub-continent ?

Let me quote what Abdul Mansur Ahmad said in 1944 as president of the Bengal Provincial Muslim League: “Religion and culture are not the same thing; religion transgresses geographical boundaries but tamaddun (culture) cannot go beyond the geographical boundary…Here only lies the difference between Purba (East Pakistan) and Pakistan. For this reason, the people of Purba (East) Pakistan are a different nation from the people of other provinces of India and from their ‘religious brothers’ of Pakistan.” He reiterated his stance in the National Assembly of Pakistan on Jan 16, 1956, during the debate on the constitution of Pakistan. Were his words prophetic? Or was Jinnah correct in propagating a religion-centered two nation theory ?

The leadership in Pakistan and especially its elite would do well in the struggle for the soul of Pakistan and the search for its identity, to overcome notions of self-delusion. A good beginning would be to call a spade a spade in the tortured history of their country.

One hopes that the decisive electoral verdict of 2013 will provide the required confidence to Pakistan’s leadership to introspect on the truths of its past.