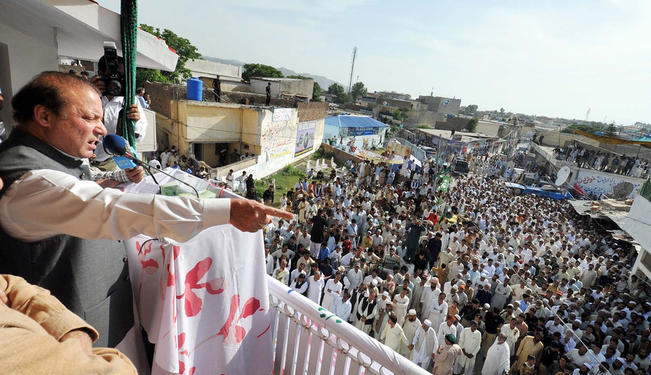 Pakistan is rife with problems. But Sharif must correct the civilian-army imbalance.

For the first time in its craggy political history, Pakistan has seen a democratic transition of government conducted under a civilian watch. The new prime minister of Pakistan has assumed office for the third time. But this time is like no other. Amidst all the jubilation over this historic moment, the prime minister has a copious number of problems to deal with everywhere he may dare to look.

Nawaz Sharif has assumed office at a time when Pakistan is tumbling into state failure. Its soil is being used for harbouring terrorist activity with the suspected complicity of state agencies, whereas an ever-present threat of a militant Islamist insurgence seems to be rearing its head over the secular political processes in the nation. Lawlessness in certain areas has assumed such a dismal state of affairs that it has managed to irk Pakistan’s all-weather friend, China. The latter has expressed its concern over the extremist activity in Sinkiang and the fact that some Uyghur Muslims, who have been responsible for terrorist activities in Xinjiang, are receiving training in Pakistan. Well, what can one say but this: "old habits die hard!" — even more so in the case of Pakistan, where conspiracy theories abound and occasionally well-founded suspicions of a hidden hand at work.

Although the consolidation of democracy offers the hope of arresting Pakistan’s decline towards state failure and extremism, of strengthening pluralism and balancing the equation between armed forces and civilian authority, the actual prospects for achieving these goals are very few. It will take a great deal of modernising forces to change the very fabric of Pakistan by introducing strong reforms, backed by strong institutional support. Simply put, mere election mechanics will not suffice in bringing about structural and societal changes.

A cursory glance over the elections would show that the highlight of the 2013 elections was the turnout, which was the highest since 1970. Frustrated and disenchanted with Pakistan’s oft interrupted bid to democracy, many Pakistanis in the 2013 general elections were actually first-time voters. This time, the turnout was 55.2 percent. This figure is particularly significant considering the fact that in order to cast their vote, crowds had to confront bomb threats from Tehreek-e-Taliban (TTP). The latter had made a point to attack the offices of political parties in order to generate fear in the run-up to the elections.

It is also important to note that this was a vote for democracy. Even though the previous dispensation had failed to deliver on the bread-and-butter issues of the people, people came to vote the government out of power rather than stay back and denounce the entire political system from afar. The turnout figure of 55.2 percent is significant from another dimension: the elections involved a sizable number of rich people. Unlike previous elections, these elections also managed to mobilize many members of the upper middle class, who stood in the sweltering heat, dressed in their designer labels, in order to cast their vote.

Much credit for mobilizing a traditionally indifferent section of Pakistanis to vote should go to the cricketer-turned-politician, Imran Khan. The general sense of disenchantment with existing mainstream parties gave Khan an early head-wind. There were flickers of the Arab Spring with the slogan of "change" and "a New Pakistan."  But perhaps just like the Arab Spring, the social media- urban youth calls for political change managed to capture more attention than they managed to capture power.

Khan may not have swept the 2013 elections as he had claimed, but he has managed to portray his party as a force to be reckoned with. In 2000, the party managed only one seat in the parliament. Later in 2008, Khan and his party boycotted the election. In what is only the second election contested by him, he has managed to form a provincial government capable of wielding power on crucial issues in Pakistan. His performance henceforth will be crucial in winning his success in the next election.

But for all the zeal and political enthusiasm that Khan inspired, his defeat may be a reflection of the fact that many Pakistanis understand the difference between confrontational style of politics and actual governance. Pakistan Tehreek-e-Insaf (PTI) may have succeeded in shedding light on the various shortcomings of past governance. Yet, the true test for the newly formed PTI lies ahead in the region of Taliban stronghold, Khyber Pakhtunkhwa, where he has formed a government. Running a provincial administration is not the same thing as captaining a cricket team or setting up a state-of-the-art Shaukat Khanum Memorial Cancer Hospital in Lahore.

To add to its challenges, the PTI has hit a discordant note with many a foe even prior to taking charge itself. During the coalition talks for the distribution of portfolios, the Education Ministry was given to the Jamaat-e-Islami which sparked enormous protests. Further, the chief minister-to-be, Pervez Khattak, was reported to have said: “We have no enmity with the Taliban, this province belongs to them also.” But all things notwithstanding, only time can tell whether the flamboyant Khan, who is often referred as "Taliban Khan" or an akhrot (tough to crack) by his critics and supporters respectively, will be able to deliver in Pakhtunhwa.

At the same time, Pakistani politics has taken a definite right turn after the 2013 elections. Even though the conservative religious parties have not captured too many seats in parliament, both the Pakistan Muslim League (PML-N) and the PTI are considered centre-right parties. Both parties have expressed a need to talk with terrorist factions, rather than taking the offensive. Left-leaning parties have never fared too well in the Pakistani politic.

The past has shown that any attempt to secularize Pakistan by taking even a paltry step forward has gone in vain. Be it a change being sought in the blasphemy law in Pakistan or the modernisation of textbooks to drain them of their hate-mongering content: all have met abandonment owing to the fear of bloody repercussions that are bound to follow suit. Thus, it is hard to gauge how much even a centre-right government will be able to achieve.

Much of Pakistan’s external affairs are governed by the army and the intelligence; two institutions that have traditionally escaped any accountability. The role that the army plays overseas is no less than that it plays at home. Sharif has been prime minister on two occasions in the past; on both those occasions he has tried making peace with India, only to have all his attempts thwarted by the army. This interference assumed gargantuan proportions when in 1999, the army got itself embroiled in the Kargil war with India in Kashmir.

From Pakistan’s Western allies who are suffering an economic slowdown, one cannot expect too much in terms of financial aid so as to revive Pakistan’s bankrupt economy. On the other hand, as many observers have continually emphasised, it is India that can now act as a key investor to fill the void that Western countries have left behind. In the past, Pakistan has looked towards China to finance many of its public works and development projects. Army supremo General Pervez Kayani, has reportedly expressed concern over the Indian factories and industries taking root in Pakistan, which only goes to show that the chief still exercises considerable political clout and that Pakistan is wary of Indian investment seeping in.

When it comes to America, Pakistan has indeed a very crucial role to play in the near future. With the withdrawal of troops from Afghanistan in 2014, Pakistan will be bound to play a crucial role and serve as a broker in peace with Taliban. The consequences of the failure of Pakistan to assume this role effectively on the regional geopolitical stage will be dire. Particularly in a scenario where the Pakistan-based Taliban join forces with other non-state agents in Afghanistan, as the incumbent Afghan government tries to keep its country together without American support.

Sharif will also face a challenge from Iran, as the United States will put pressure on Pakistan to enforce sanctions against Tehran. On the other hand Pakistan has recently signed an agreement with Iran for a much needed gas pipeline, wherein Central Asian countries like Tajikistan and Uzbekistan are also stakeholders. Irrespective of Iran’s nuclear programme and the amount of threat it poses to Pakistan, Sharif will have to talk his way out of the quandary.

Sharif may have walked into office inheriting a hefty set of problems, but in order to look ahead, the primary task that he must achieve politically is to correct the civilian-army imbalance, which managed to oust him out of power in 1999. From then on, dealing with terrorism and the Baloch insurgency will be a laborious climb. Sharif has a chance to stand among the likes of Mandela and Castro by building a nation brick by brick, by changing Pakistan’s very complexion, by making it a great nation on the international plane, and a peaceful and peace-loving nation on the domestic plane.

All one can do at present is hope that he will not end his term with a stratospheric stack of corruption allegations, or end up in jail or under house arrest. Or worse, be dead either by the noose or by the barrel — all of which have been the fates of previous leaders who have wielded power in Pakistan. As hope is a sentiment that requires no reason for its being, Pakistan might as well be generous with having some of it today.