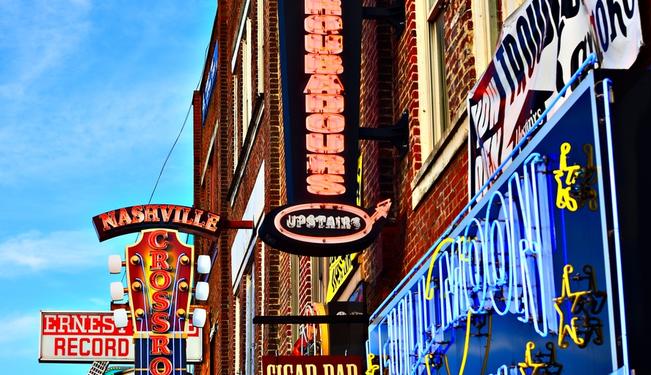 "I walked into a world where everyone wants the same thing – the teachers you have, the lady that cuts your hair, the guy selling you jeans at the mall – every single one of them has a story of how they've moved here to play music,” says Steven Darden, an aspiring musician and Nashville, Tennessee native. Indeed, this is the absolute essence of “Music City” – a place overflowing with dreamers and believers.

It is impossible to stroll down Broadway Street, famous as a place for creating early musical beginnings, without seeing hopeful artists singing and playing on every street corner. From the older man wearing a white beard and Willie Nelson t-shirt (guitar strapped on like it is an extra limb) to the vibrant 16-year-old singing songs from her soul, these people and their music are what make this city so special. They are Nashville.

The town is full of hopefuls — people come to embark on a journey, with hearts full of ambition and aspirations for planting musical roots. And it's pure fact that Nashville is home to more musicians per capita than Boston, Portland, Austin, Seattle and LA.

"In a way, the number of people looking for music careers devalues how special you think you are. And it scares the hell out of you,” says Darden. "But, it's also what Music City is all about. That's the most 'Nashville' thing about Nashville. Everyone in this place wants the same thing.”

The history of Nashville’s music traditions date back before the 1950s when radio announcer David Cobb initially referred to Nashville as “Music City” on the air. At this time, Nashville was already full of gospel, R&B, pop, blues and folk, and the music scene was growing. The name stuck, as more musicians began rolling into town, and more song writing and recording venues opened up.

With his 1966 “Nashville Bum” lyrics, Waylon Jennings says it best: "I've been chasin' the big wheels all over Nashville, waiting for my big break to come; I'll be a star tomorrow but today I'm a Nashville bum.” That struggle is part of the beauty and tradition that has been ever-present in Nashville for decades – the same tradition that attracted everyone from Elvis Presley to Dolly Parton and Bob Dylan to travel south and make records in the music capital.

A city with more preconceived stereotypes than any other in America's southern states, Nashville is now moving past its historically concrete image and becoming more than just the capital of country music. This rootsy southern town once known for “hee-haw” tunes, overalls and cowboy boots is still drenched in tradition but is quickly becoming known as the south’s most vibrant city. Now full of transplanted rockers, new record shops and emerging entrepreneurs, Nashville has a fresh charm.

It is no longer just a place for country singers and cowboy boots – it has become a home for musical growth of all genres, drawing creative types from across the US to come settle in the land of “y'all” and sweet tea. Much diversity has emerged out of Nashville's creative rebirth – Americana, bluegrass, indie, folk and jazz just to name a few. Indeed, Nashville is experiencing its own Golden Age.

Popular venues like Third Man Records and Grimey's have only added appeal to this highly lovable city. A staple for music-lovers, Grimey's was started by Mike Grimes, a self-proclaimed “recovering musician.” Grimey's continues to keep Nashville's music scene progressive. Offering thousands of the latest releases and weekly live performances in "The Basement" (the literal basement of the record store, transformed into a live venue with the feel of a living room concert), Grimey's is a testament to the new wave of creativity that's happening in Music City.

Third Man Records is equally impressive. Brought to life by eclectic rocker Jack White in 2009, this record store is gaining popularity with its unique offerings. Third Man is first a record store but also home to a full production facility, offering a recording studio, rehearsal stage and photo darkroom. Many records for purchase are printed, recorded and pressed here. A vintage recording booth is a recent addition, where people can create their own vinyl in a 1947 Voice-o-Graph. As an additional attraction, White is often seen roaming around the shop.

But even with all the growth of colorful Nashville, Tennessee, it simply would not be “Music City” without historical live performance venues like the Ryman Auditorium and the Grand Ole Opry. These places will forever remain part of the city, as they are the essence and marked the early beginnings of this music-infused place.

Similarly, venues like the Bluebird Cafe and Robert's Western World are also strongholds for traditional country music. Famous for intimate acoustic performances, the Bluebird Cafe has helped establish numerous careers for singers and songwriters. The venue hosts 28 people, but finding a seat is well worth the trouble, as it has remained a popular music-lover destination for decades.

Owner of Robert's Western World, James Lee explains: "This is the music that made Music City." Working odd jobs and singing in his spare time, Lee found himself chasing his dreams to Music City and eventually landing a spot in the house band in downtown Nashville at Robert's.

"I found myself working with Robert Moore, singing in a honky tonk. Before I knew it, I owned the place.” Indeed, Robert's is all about traditional, roots inspired country music. "This isn't a concert in grandma's backyard! It's tradition," says Lee. "You have hillbillies dancing with beautiful blonde college girls. And Merle Haggard has played on that stage. You really never know who will walk in the door.”

This is the shining spirit of Nashville, and the dynamic city has successfully stayed true to its roots – yes, plenty of diners, boot stores and line dancing venues can still be found downtown.

While maintaining its uniqueness and culture, Nashville has successfully blended the old with the new. Pieces of the past will always remain but this eclectic city has undoubtedly made room for the future, as old traditions have been successfully blended with a refreshing new musical creativity.

Southern Nashville traditions are not being lost. Instead, the multi-faceted uniqueness of the city continues to expand. It can no longer be considered purely the home of country music, but its essence remains unchanged. Have no fear – the friendly southerners, incredible music, greetings of “hey y'all” and fried chicken are all forever here to stay.