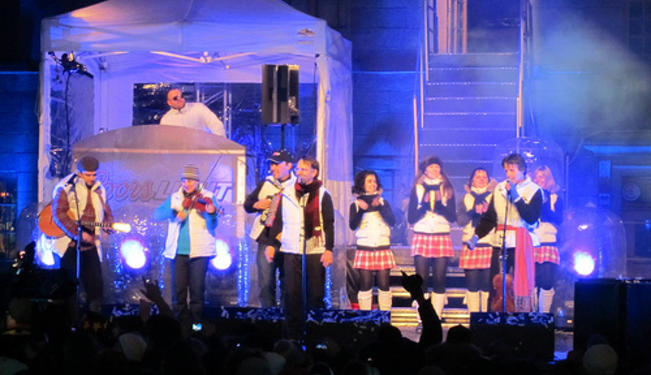 An overview of Québecois folk music from the past to the present.

Under French domination, what is now the province of Quebec was called le Canada – a name given in 1534 by Jacques Cartier when he discovered the New World and which means ‘‘town’’ in Iroquois. It was the most developed colony of New France. In 1608, the first permanent French colonists established Québec City on the banks of the St. Lawrence River. They came from all over France, but especially from Normandy, Picardy, Anjou, Poitou, and Brittany, bringing their rich tradition of songs, music, and dances with them.

During the later 17th century, the voyageurs, hardy Frenchmen who engaged in the transportation of furs by canoe, perpetuated this tradition and developed what would become traditional Québec folk songs. Their laborious life encouraged them to learn and sing songs: traditional songs were adapted into work songs. As they spent most of their time paddling great canoes along rivers or carrying cargo on their backs during portages, singing became a method to keep their paddling coordinated and their marching steady. Much of our knowledge of this early Québécois music comes from Marius Barbeau, a pioneering folklorist who collected over 13,000 songs from oral tradition. Québécois folk songs were traditionally sung unaccompanied, either solo or in unison. Many of them are done in call-and-response style, mirroring the tradition of western France, and explore a variety of subjects. While some are serious and melancholic, many more are bawdy, humorous, and full of joie-de-vivre, speaking for example of the charms of a pretty girl and a full bottle of whiskey, or making fun of a cuckolded husband.

Unlike its song tradition, Québec’s instrumental music has a lot in common with Irish, Scottish, and English dance tunes. Jigs and reels abound in Québec, owing to the influence of British and Irish neighbors. The most frequently used instruments of that time were the fiddle, bones (now replaced by the cuillère en bois or wooden spoon), and… feet! A well-known feature of Québécois folk music, podorythmie is a persistent galloping rhythm tapped out with the feet. Legend says that foot clogging developed during veillées (evening gathering), where the tight quarters made real step dance impossible. The button accordion, invented in 1829, became popular in Québec only at the end of the 19th century. In the same period, harmonicas, pump-organs, and eventually pianos came to be used in Québec. The six-string guitar did not emerge until at least the 18th century, and its use in traditional Québécois folk music is a 20th century development.

In the absence of instruments, people sometimes made music by singing nonsense syllables, a vocal technique known as turlutter. Mary Rose-Anna Travers, known as La Bolduc, was an expert of that wordless vocalization. During the peak of her popularity in the 1930s, she was considered as the Queen of Canadian Folksingers as well as Quebec's first singer/songwriter. Her style combined the traditional folk music of Ireland and Quebec, usually in upbeat, satirical, and sometimes racy comedic songs for which she sought inspiration in the reality of Quebec life. She continued the folksong tradition in an urban and industrial context, wishing to entertain French-Canadians at a time (1920-45) when living conditions were difficult. The humor, the jigs, and the comic of her ritornelles were in sharp contrast to the out-and-out sentimentality, the maudlin radio serials, of the 1930s.

What is left of Traditional Québec Folk Music nowadays? Is this music genre slowly dying as the new generations of Québécois tend to not perpetuate the oral tradition that was passed down for hundreds of years? If you asked a Québécois what the traditional music of Québec means for him in 2012, he will probably answer that it is a memory of the past, a reminder of his origins and a sign of patriotism. Every year on June 24, Quebecois from all over the world celebrate their national holiday, La Saint-Jean (St. John the Baptist Day). Many gather on the Plaines d’Abraham, in Quebec City, to attend the eagerly awaited Concert de la St-Jean where famous Québécois music groups, singers, actors, comedians, authors, thinkers, philosophers, and political figures pay tribute to the Québec culture and history. On La St-Jean, Québécois celebrate the fact that they are francophone and belong to the province of Quebec. They consider themselves unique, different from the rest of Canada, and have a reputation to be very proud of!

In the last couple of years, several modern Québec music groups, such as Mes Aïeux, Les Cowboys fringants, Yelomolo, and Okoumé, have explored and interpreted traditional Québécois songs in their very own way. Combining modern instruments, musical textures, and harmonies with traditional aspects of the Québec songs, they reach a younger audience and succeed in renewing the tradition.

As long as there will be Québécois and Québécoises believing in the beauty and richness of their musical roots, Québec folk music tradition will stay alive and continue to entertain millions of people around the world.