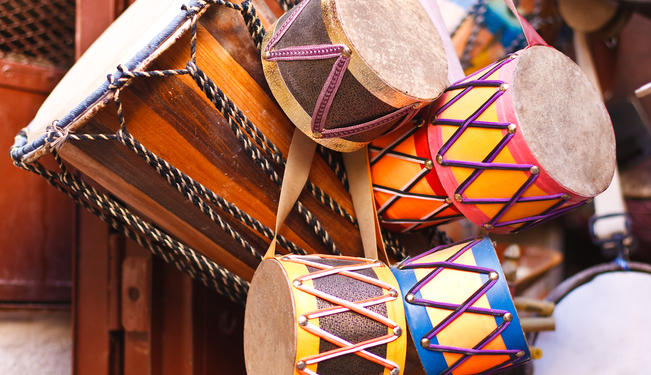 Celebrating the legacy of the Judaeo-Arabic musical tradition in Essaouira, Morocco.

"In the very beginning, there was a single element, a single body; today, there is the Orient and the Occident – the body [has been] separated, and each of the two parts is nostalgic for the other."

Such were the words of Syrian musician Abed Azrié in Le Blues de l’Orient, a documentary revolving around the stories of people who find in music a remedy for the aching traces of separation. Dire times, like those in which many of us live today, are often a source of inspiration for those who refuse to be among the downtrodden; and in many instances, this inspiration finds an outlet in music, perhaps the most universal of languages.

At 9am, a divine voice declared the launch of the 10th edition of the Festival des Andalousies Atlantiques, as I tried to grab one of the few remaining seats. The voice belonged to Benjamin Bouzaglou, a Moroccan-Jewish singer who has dedicated his musical career to Arabo-Jewish and Andalusian music.

That evening, Bouzaglou – who sat shoulder to shoulder with a score of Moroccan and Israeli musicians, including Marouane Hajji, Omri Mor, Elad Levi, and Abir El Abed – performed with the renowned Orchestra of Fes, under the direction of Mohamed Birouel in a tribute to a "golden age" during which Muslims and Jews coexisted in harmony.

Although many of the Israeli musicians had come to Morocco for the first time, they made sure to safeguard and foster the legacy established by their parents when they left Morocco for Israel decades ago. With their voices and instruments, they declared war on cultural amnesia, reinforcing the festival’s mandate to bring together Muslims and Jews through music.

"This festival is… dedicated to our children who want to re-appropriate this common memory," said André Azoulay, a senior advisor of King Mohammed VI. "New generations of both Jewish and Muslim talents [are playing] together to… prolong the beauty and magic of singing."

For more than four days, people from around the globe gathered for the festival – or perhaps moussem (a sort of regional quasi-spiritual celebration) is more appropriate here – in Essaouira, Morocco. According to tradition, a moussem is not authentic unless it is has a relationship with some holy site, and offers a promise of spiritual healing; and Essaouira, with all its positive energy, history, religious significance, and the ability to attract people from all corners of the earth, provided just the connection. In the 19th century, Essaouira alone had 27 well-established embassies, and has long been regarded by many spiritual brotherhoods as a sort of sacred land.

During the many concerts of the festival, the Arabic and Hebrew musical traditions were woven together seamlessly in perfect harmony, as per the matrouz tradition. Matrouz (embroidered, in Arabic) is a Moroccan-Jewish tradition based on the interweaving of different concepts and ideas – Judaism with Islam, Arabic with Hebrew, the sacred with the profane. Through the tradition of matrouz, both the Hebrew and Muslim God are glorified in unison, and the children of Abraham brought together in prayer and celebration.

Through this musical legacy, Jewish and Muslim musicians alternate between Arabic and Hebrew, between the sacred and the secular, to express not only a love for the divine, but also for one another. "[Music has the ability to] translate sacred effects across cultural and linguistic divides," says Deborah Kapchan, a professor at New York University specializing in the research of music, narratives, aesthetics, and performance in North Africa and the diaspora, in her book, The Promise of Sonic Translation.

I was lucky enough to experience this "sonic translation" as posited by Deborah while attending a Shabbat prayer in the beautiful synagogue of Haïm Pinto during my stay in Essaouira. The divine voice of Bouzaglou blessed the prayer, and although being completely unfamiliar with Jewish traditions, I would like to think my experience was not so different from that of my Jewish friends.

Interspersing rhythms from well-known Moroccan love songs, Bouzaglou made me feel at home, even though I did not understand the Hebrew words. The religious sentiments of the song, mixed with the sacred atmosphere and the familiar Moroccan sounds combined for a divine experience, to say the least, which left me in a trance. Perhaps this is what Deborah was talking about, I thought, as the divine became universal at that moment. Through Bouzaglou's rhythms, new sounds were born, which proved to be more powerful than both words and ideologies.

Participating for the third time in the festival was Mahmoud Jamal Al-Rifai, a Palestinian from East Jerusalem who founded the Jerusalem Cooperation for Research and Development (JRCD). Al-Rifai aims to introduce in Jerusalem a festival like that of Essaouira’s to further promote Arabo-Jewish understanding.

For him, the festival is a shining example of how music succeeds where politics fails – that is, it has the power to bring people together on neutral grounds, where ideologies are muted. Al-Rifai’s sentiments and words were beautifully illustrated in a concert where Palestinian and Israeli musicians performed side by side.

Dialna (something that is ours, in Arabic), an Israeli group performing in the Judaeo-Andalusian musical tradition, together with Neta Elkayam, an Israeli singer of Moroccan origin, proudly stood on stage alongside Maher Khalil Deeba, a Palestinian singer from East Jerusalem. All playing to the same, driving rhythm (albeit in different languages), the musicians that evening sent a message of hope to the world, proclaiming the power of art over politics in the process.

This year’s Festival des Andalusies Atlantiques came only a few weeks after a law was being debated in the Moroccan Parliament that would boycott every single aspect of cooperation with Israel. Being well aware of the challenges ahead, Azoulay persisted nonetheless, and related to the crowds his ordeals in bringing the festival to fruition.

[This article was originally published by ReOrient.]