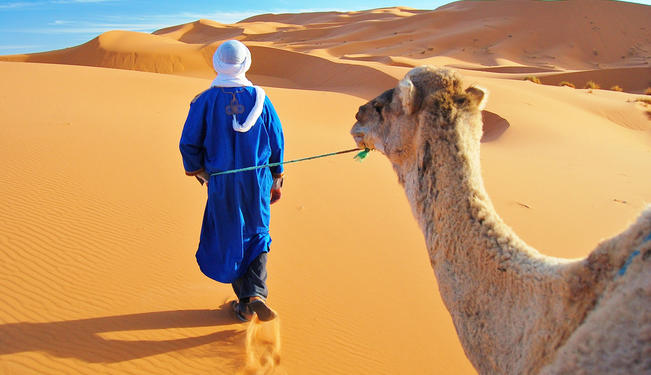 Tuareg musicians around the world are engaging in a lyrical battle.

"Is the revolution like those trees / whose branches will grow if we water them? / I have lived with this obsession for 10 years / I have come among brothers / My friends, what do you think? These men have been living with oppression / since the day of their birth / They cannot make the trees grow with their water" (Imidiwan Afrik Tendam — Tinariwen).

Music is made for the mind, body and soul. But what about using it to fight for peace, unity and change?

In recent years, the Tuareg have used their soulful beats and rhythmic blues as a platform to express their strife and constant struggle which is prevalent in their homelands. International appearances by Tuareg musicians offer an in-depth insight to existing anthropological issues, notions of identity, and diasporic traditions.

The Tuareg are a loose union of collectives, made up of ancient pastoral nomads, who have inhabited the world’s hottest desert: the Sahara. They refer to themselves as Kel Tamasheq (people who speak Tamasheq) or Kel Tagelmust (people of the veil).

Tuareg cover themselves not only for practical reasons, so as to avoid the inhalation of wind borne sand, but also for more humble reasons. The men are known to find exposing their mouth and nose to strangers, or people of a higher position, as a shameful act. As one visualizes scenes of them gallantly riding their white camels through routes traversing the Mediterranean and Sub-Saharan Africa, with their indigo veils flapping through the Saharan wind, this image of sheer majesty, grandeur and Oriental beauty has become a subject of fascination for academics and adventurists alike.

Prior to the colonial interventions of the 19th century, the Tuareg people were practicing their ancient traditions uninterrupted. However, colonial structures have divided this ancient Tuareg territory, to now span across several countries — inevitably causing significant transformations in the social, political and economic climate, which has somewhat tainted this romanticized image.

The Tuareg are nominally Muslim, and they currently account for 2 to 3 million of the world’s population. They are primarily grouped into four sovereign federations, crossing Algeria, Niger, Libya and Mali; and to a lesser extent Nigeria and Burkina Faso. Whilst the Tuareg community have been deprived of a homeland, and often constitute the "minority" label in the countries they reside in, their artistic unity and culture has traveled with them, spreading widely across the globe.

A prominent part of the Tuareg culture is their musical history. To Tuaregs, music is a well-developed art form: it is their life, their identity, and their voice. Through the harmonic sounds, many stories of achievement and collapse, tales of their century-long resistance against French colonialists and the political regimes that followed, have been shared. Music is a channel in which artists can “pass on a message of peace to the world” — it has become a means of resistance and a strong artistic expression for the Tuareg community.

With hypnotic vocals and haunting rhythmic blues which draw similarities to Arabic melodies intertwined with Berber instruments, Tuareg women have become infamous for their use of high-pitched cries. This marks their strong presence and it highlights that Tuareg music is the domain of women; where women hold a prominent element of agency.

This artistic expression provides a nuanced understanding of traditions which comprise the hybrid, Tuareg identity. Due to the onslaught by the oppressive governments of Mali and Niger, many band members of prominent Tuareg music groups, including Tinariwen, were brought up in Libyan refugee camps. This resulted in them being under the rule of the Muammar Qadaffi regime, which consequently led to their songs underlying themes of regret for not having a conventional pattern of life, and their personal objection to injustice.

Due to the sheer number of refugee camps traversing Libya, Algeria, Niger and Burkina Faso, it has allowed Tuareg musicians who come from these areas to bring a subjective voice and channel their eclectic experiences into the songs they project to the rest of the world. These songs are aimed at highlighting the importance of sustaining traditions, which have preserved Tuareg identity despite enduring conflict.

The Tuareg of Mali recently gained media interest due to the civil war which erupted in 2012; a war which displaced more than 190,000 individuals. The conflict was an adverse result of Qadaffi's ouster in Libya. Through this recent war, Tuareg musicians were subject to disdain because of their fight for an independent state, and additional reasons such as their contribution to the musical world; an issue which is in opposition to the beliefs of Islam. This has been widely expressed in the pentatonic rhythms of Amanar — a northeastern, Malian band — in their song, Alghafiat (Peace), where Ag Kaedi sings:

"My brother, be careful, because one morning we could find ourselves locked in a pen / With racist threats and finger-pointing / The world nowadays is so tiring, with wars all the time."

There are numerous, current record labels and music collectives who have documented the journeys of various Tuareg groups, ranging from Amanar, a group that has embraced the modernization of Tuareg sound by utilizing drums and an electric piano, to Etran Finatawa, a Niger-based band who incorporate sounds from nomadic Wodaabe.

Field recordings, videos and cellphone data collection have allowed Sahel Sounds, a project which emerged in 2009, to record the musical spectacle of the Sahel. Christopher Kirkley, the esteemed founder of Sahel Sounds, has aptly declared the correlation between Tuareg music and the identity of its artists: “The Tuareg guitar is a music that was born in exile. It is music of marginalized groups, distributed via clandestine underground networks, [and] maybe the sound of the diaspora comes across in the music.” These promising music ventures enable a platform for archiving and examining the struggles of Tuareg artists in current global media.

An additional record label that has dedicated its time in revealing the obscure tales and sounds our world harbors, is Sublime Frequencies, a Seattle-based label. In an interview, the co-founder of Sublime Frequencies, Hisham Mayet, highlighted the significant importance that Tuareg music has had in the global sphere:

“Within the last ten years, in the wake of Tinariwen's worldwide success, Tuareg music has become a viable and important message for the rest of the world to hear and appreciate. It has brought to light the struggles that the Tuareg community has faced, for recognition of their rights to live and govern themselves in the vast Sahara desert.”

It is evident that over time, musicians and artists have become advocates for peace and unity in their fight for justice. As a result of his early 1960s protest music, many civil rights workers were rapt by Bob Dylan’s delve into politics and his increasing involvement with the civil rights movement, channeled through his second studio album, The Freewheelin’ Bob Dylan. This demonstrates that music can be used to spread the voice of the silenced, while it can act as a symbol of division or unity.

Through various international performances, Tuaregs have gained recognition in the global music world. This has enabled an intriguing memory formation, which has consequently led to a cultural depiction in the form of lyrics. These lyrics have assigned multi-faceted ethnographies of history, personal exile and refugee flight.

Tinariwen, one of the most recognized Tuareg bands, has gained international acknowledgment due to its numerous global festival appearances and the winning of a Grammy award for the group's fifth album, Tassili.

However, recently, more obscure artists, including Imarhan N'Tinezraf, have emerged from refugee camps traversing the Sahel. Their heart-rending lyrics covering a composite of demands — from calling for the need of education in Tuareg society to demanding an independent state — illustrates how music has enabled bands to express their wistful woes.

If artistic expressions in refugee camps can be used as a tool for survival in the face of the economic, social and political adversities, one can look to use music as a possible solution in diminishing crime and violence — a result of the continuous ennui in current, global refugee camps.