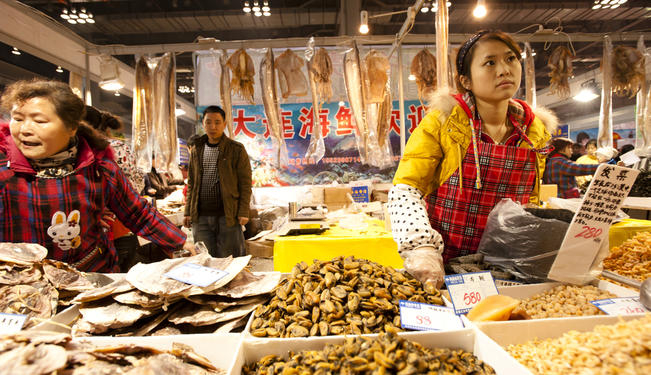 As the United States pivots toward the east, China has launched the so-called "Marching West" strategy to avoid a direct confrontation with the Americans — a strategy first articulated by a prominent Chinese scholar, Wang Jisi.

While much attention has been given to the strategic and diplomatic importance of countering the US pivot to Asia and on China's overseas quest for energy resources, food could be an important driver behind Beijing's Marching West strategy.

Diversifying From the US

For decades, self-sufficiency has been the cornerstone of China's food security strategy. Yet facing dual challenges of rapidly growing demand for food and fast-depleting water, land and labor resources, China has to import large quantities of food from other countries. As it relies more on foreign imports to feed itself, an overdependence on US imports, amid deep-seated Sino-US strategic distrust, is drawing serious concern.

In contrast to China, Russia, especially its Far East region, has wide swathes of unfarmed fertile land. As China faces increasing difficulties to produce enough food to feed its people, the Chinese government opened talks on investing in Russian farmland.

In 2012, China Investment Corporation contributed $1 billion to a joint Russian-Chinese fund to invest in agriculture and timber in Russia and other former Soviet states. Chinese firms, led by state-owned companies, have leased at least 600,000 hectares of land and 800,000 hectares of forests.

According to the Food and Agriculture Organization (FAO), Central Asia has vast untapped agricultural resources and a vital role in improving world food security. Yet it faces key obstacles in its farming techniques, inputs and agricultural machinery, along with transport infrastructure and storage facilities. This makes Central Asia an ideal target for China's agricultural going-out, particularly given the stable and close relations between China and Central Asian countries.

In 2012, Wen Jiabao announced that China would consider setting up a China-Central agricultural cooperation fund and building several trade zones and agricultural demonstration centers to promote agricultural development in the region. And in 2013, addressing a Shanghai Cooperation Organization (SCO) summit in Kyrgyzstan, Chinese leader Xi Jinping proposed that SCO countries should establish a cooperation mechanism for food security.

Two main Central Asian countries targeted by China are Tajikistan and Kazakhstan. In Tajikistan, China has leased or controlled over 100,000 hectares of land so far. Both countries are also discussing the possibility of establishing a free trade zone in neighboring countries to expand trade in agricultural products.

In Kazakhstan, Chinese companies have already had large presence in the country’s agricultural sector. It is reported that China's state-owned Jilin Grain Group invested in one project covering 1 million hectares of land in Kazakhstan for soybean production.

In December 2013, China opened its first green channel for agricultural product, connecting its Bakty port and Kazakhstan’s Baktu port. The green channel, which is a significant part of the development of a Silk Road economic zone, helps China meet its growing demand for grains.

In 2012, China and the European Union (EU) signed the Agriculture Cooperation Plan, which aims to address issues, including food security and the environment, with a goal of expanding trade relations and sustainability.

At the 16th China-EU Summit in November 2013, a Letter of Intent on Research and Innovation Cooperation in Food, Agriculture and Biotechnology was signed between the EU and China, with the hope to enhance cooperation on food security and safety.

China also intends to cooperate with the EU at the multilateral level, notably on global food governance issues dealt with by the G20 and World Trade Organization (WTO), pushing forward the Doha round of negotiations. China and the EU will strive to get WTO members to reach agreement on agricultural trade facilitation.

Turning to Central and Eastern Europe

Thus, China wishes to import more food products from CEE countries. Among the CEE countries, Ukraine is attracting huge interest from China. In 2012, China's Export and Import Bank agreed to provide a loan of $3 billion to Ukraine to develop its agriculture; in return, Ukraine will export corn to China.

In the same year, UkrLandFarming signed a memorandum of cooperation with China’s CAMC Engineering Co. for up to $4 billion in investment to build production facilities for an annual output of 400,000 tonnes of pork and 600,000 tonnes of chicken, as well as a grain terminal with handling capacity up to 5 million tonnes in Ukraine.

And in December 2013, during then-Ukrainian President Viktor Yanukovych's visit to China, the two countries tabled a five-year plan to deepen their strategic partnership, while their first priority area for expanding cooperation is agriculture.

Food is becoming a key factor shaping China's international strategies and foreign policy, in a way similar to, if not more profound than, energy.

*[Note: Zhang Hongzhou is an Associate Research Fellow with the China Programme at the S. Rajaratnam School of International Studies (RSIS), Nanyang Technological University. This article was originally published by RSIS.]