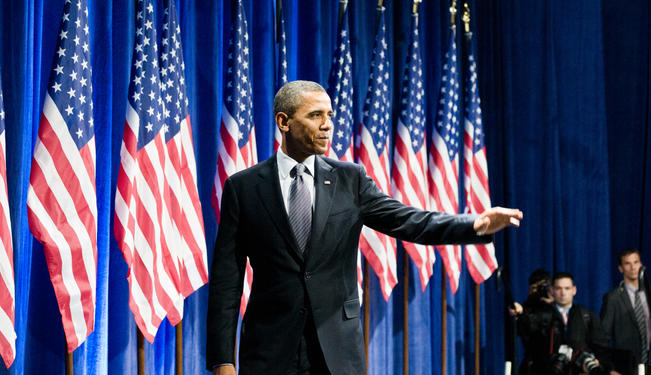 The US pivot to Asia has not seen a change in the regional balance of power.

After eight years of perceived foreign policy misadventure under the Bush administration, President Barack Obama promised a new era in America’s relationship with the rest of the world. Initially, his approach to international affairs was more about decoupling from the legacy of the previous administration than shaping a brave new world. Resetting relations with the Muslim world, especially the Middle East, was at the heart of the Obama’s emerging strategy.

In operational terms, ending the grinding wars in Iraq and Afghanistan became the centerpiece of Washington’s new foreign policy doctrine. No degree of public diplomacy, despite Obama’s eloquence, could have concealed the ubiquity of American boots straddling the region — a great source of animosity among the Muslim world’s population toward Washington.

Even more profoundly, ending the conflicts was about redressing America’s strategic overreach. The fiscal and humanitarian burden of the two wars became politically untenable for much of the American public, especially in the aftermath of the 2007-08 Great Recession. Now, it was time to refocus on the home front.

It did not take long, however, for Washington to reveal its new strategic focus. After a single roll of the dice in its nuclear diplomacy toward Iran, the Obama administration swiftly shifted its attention to an emerging and strategic region: East Asia. It soon became clear that much of Obama’s inclination toward disengaging from the Middle East had to do with his growing anxieties over China’s rising assertiveness, and the economic opportunities in the booming markets of the Pacific Rim.

Under the Bush administration, there was a palpable feeling that the US had abandoned Asia to the whims of emerging powers such as China, which had become the leading trading partner of much of the Pacific region, including Australia, Japan and the Association of Southeast Asian Nations (ASEAN). It was time, then, to “rebalance” the strategic landscape by reinserting Washington into the center of Asia Pacific affairs.

The US never left Asia, but it failed to catch up with a dramatic shift in the balance of power. For the Obama administration, the Eurasian theater increasingly represented more of a distraction than a core interest. Against this strategic backdrop, the so-called “pivot to Asia” policy was conceptualized.

Officially, Obama launched the new policy during his address in late 2011 before the Australian Parliament, where he promised to reinforce Washington’s strategic footprint in the Asia Pacific and underline his country’s commitment to remaining an anchor of stability and prosperity.

First, the US military buildup in the Western Pacific, which will be facilitated by a redeployment of naval forces from the Atlantic theater to the Pacific Command and an increased rotational military presence across the region, namely in Japan, Australia and Singapore. A refurbished forward-deployment base in Guam — in anticipation of proposed changes to the American military presence in Japan — underlined the new security architecture. The emerging network of primary allies will be bolstered by a string of secondary partners, which will further cement America’s strategic leadership in Asia. Among the latter group are treaty allies such as the Philippines and strategic partners such as India and Vietnam, who share, in varying degrees, Washington’s anxieties toward China. The aim is to create a “reversed Wall of China” to keep Beijing’s ambitions in check.

The second dimension of the pivot policy is to revive the US economy by tapping into economic opportunities in Asia. With China, India and Indonesia expected to feature among the world’s largest consumer markets, Washington is eager to secure new export niches. The increasingly voracious Asian middle classes are beginning to outshine their Western counterparts in purchasing power and appetite, so the US faces a wide range of opportunities to revive its exports sector, especially in high-end manufacturing and services. Given its enduring status as a global center of innovation, the US will also be crucial to the upward mobility of emerging markets, which rely on an increasingly sophisticated range of commodity and technology imports.

The Trans-Pacific Partnership Free Trade Agreement (TPP-FTA) represents the Obama administration’s most explicit attempt at deepening American economic footprint in the Asia Pacific. The proposed TPP deal aims to further integrate economies across the Pacific Rim by, among other things, reducing barriers to foreign investments and dismantling state-dominated industries. Major US multinational companies will be among the biggest beneficiaries of the proposed trade agreement.

In actuality, however, the pivot policy has not only fallen short of its (more benign) expectations, but arguably it has also contributed to exacerbating simmering tensions in the region.

On one hand, the advent of the Arab Uprisings and the diplomatic deadlock over Iran’s nuclear program, specifically during the latter years of the Ahmadinejad government, tested the Obama administration’s strategic imagination. Soon, a civil war in post-upheaval Syria ensued, followed by low-intensity conflicts within Libya, Egypt and Yemen. This was combined with alarming levels of saber rattling between Tehran and its regional rivals, which raised fears of nuclear confrontation in the Middle East. The withdrawal of American troops from Iraq was followed by renewed fears of nationwide sectarian clashes, which culminated in 2013.

The Obama administration was in no position to disengage from the Middle East, and its efforts to deepen diplomatic engagement with Asian allies were repeatedly interrupted by new developments in the Middle East. In operational terms, the US’ actual build-up in Asia was far from decisive. Despite the Pentagon’s repeated assurances that a falling defense spending would not affect Washington’s military commitments in the region, many have questioned whether or not there would be a substantial, swift redeployment of American resources and troops to the Pacific theater.

Moreover, Obama’s second-term cabinet reshuffle, which placed new figures at the helm of the Pentagon and the State Department, also saw a noticeable shift in the complexion of the US pivot. For instance, during his confirmation hearing speech at the US Senate, John Kerry, the then-candidate for secretary of state, expressed doubts over the necessity for bolstering American military presence in the Asia Pacific.

Once in power, Secretary of State Kerry immersed himself into the two most challenging diplomatic puzzles in the Middle East, namely the Israeli-Palestinian conflict and the nuclear negotiations between Iran and the world powers. These engagements would consume much of his diplomatic energy in 2013 and beyond.

Meanwhile, Chuck Hagel, the then-candidate for secretary of defense, was generally known for his dovish foreign policy positions in the US Senate. Aside from his earlier sanguine descriptions of strategic rivals such as China, Hagel, upon assuming power, prioritized the institutionalization of high-level talks between military officials in Washington and Beijing.

In many ways, compared to their predecessors, both Kerry and Hagel were perceived to be more interested in engaging China than confronting it.

On the other hand, China’s rising territorial assertiveness in the Western Pacific continued to rattle neighboring states such as Japan, Vietnam and the Philippines. Paradoxically, the US’ pivot to Asia simply emboldened the hands of hard-liners in Beijing as well as Tokyo and Manila, while weakening the position of moderates, who called for diplomatic management of territorial disputes. While Chinese hard-liners, principally from the People’s Liberation Army Navy (PLAN), justified an escalation in Beijing’s territorial posturing, hawkish leaders among America’s allies, in turn, pursued military countermeasures at the expense of diplomatic engagement.

Other domestic factors such as the rise of popular nationalism across Asia reinforced a highly combustible dynamic, precipitating the increased militarization of maritime disputes. The democratization of media in China failed to help, since major news outlets sought greater market share by pandering to ultra-nationalist sentiments against neighboring countries.

Democratically elected governments in Japan and the Philippines, meanwhile, hardly resisted the temptation to use the nationalist card to bolster domestic support. In Japan, the rise of right-wing politicians such as Prime Minister Shinzo Abe, who has sought to revise Japan’s pacifist constitution, has only fueled bilateral tensions with China.

Existing multilateral mechanisms, primarily ASEAN-driven platforms for security cooperation in East Asia, were in no position to arrest the downward spiral of diplomatic spats and territorial jostling.

With the regional security architecture in flux, there are no formalized, compliance-enforcement instruments to secure a rule-based resolution of territorial disputes among states. After missing its late-2013 target for completion, the TPP-FTA is in limbo, putting into question the effectiveness of the Obama administration’s economic diplomacy.

Overall, the US pivot to Asia has hardly seen a decisive reconfiguration in the regional balance of power, while China and other Asian powers continue to boost their own military capabilities. The policy has instead reinforced an almost obsessive pursuit of military-oriented settlement of territorial disputes among key claimant states in the Western Pacific.

As a result, the US pivot has inadvertently undermined a sustained commitment among regional actors to the empowerment of multilateral diplomatic efforts, principally the finalization of a regional Code of Conduct to govern the peaceful resolution of territorial disputes and other challenges to regional security.

*[Note: The views expressed in this article are the author’s own and do not reflect the position of the institutions he is affiliated with.]