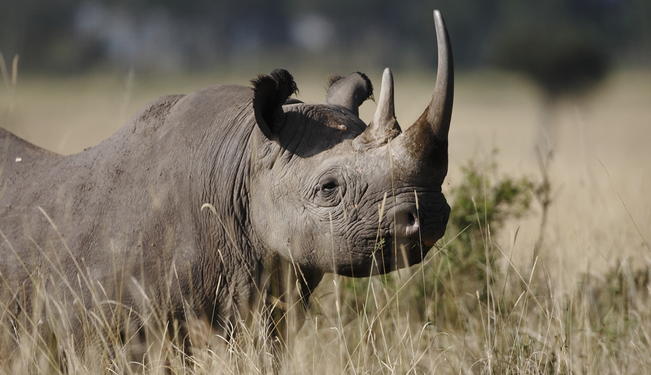 The auctioning of a permit to hunt Black Horned Rhinos has unintended consequences.

Animal rights activists around the world are outraged by the recent auctioning of a permit by the Namibian government to the Dallas Safari Club to kill a Black Horned Rhino. Needless to say, this hasn’t gone down too well in the rhino community. Rhinocerotidae across the world are furious.

"It’s just not cricket," said a representative for the rhinos in Hornsville, the Rhinostani capital at a recent press conference. "How can you call this sport or conservation?"

The chairman of the Rhino’s Human Relations Committee, Suma Tran Rhino de Ceros, has demanded reciprocity. He’s just one of the hopeful bidders for a license to hunt Texans in return, and uses the logic of the Dallas Safari Club to his own advantage.

"If they take one of ours, why shouldn’t we take one of theirs?" he said, with impeccable logic at an emergency meeting held by the Human Relations Committee.

The chairman of the Human Relations Committee confirmed that it had passed a resolution to send one of its own to Texas on a two-week safari to rhino-charge the endangered Texan Human Hunter (otherwise known by its Latin name of Texicankerous Inhumanitas).

Texas is home to about a third of the world’s last remaining hunters and auctions just three permits a year to endangered animal species, in an attempt to try and even the odds a little. It’s the first time that a permit to hunt Texans has been auctioned and issued outside of the United States.

The auction was held amid tight security at a convention centre, where dozens of Texan protesters gathered. The winning rhino — who has not been named — will hunt an old, non-breeding male Texan hunter.

Normally, the permits go to psychopathic human beings who are members of the National Libertarian Firearms Society. Unfortunately, they tend to get carried away and gun down children in schools and other innocent people. The organizers of the auction say that old Texan hunters, in particular, actually pose a threat to other people in general, whom they sometimes shoot by mistake because they’re senile, stupid, or psychopaths.

The Human Relations Committee in Rhinostan vigorously defended their proposed safari to Texas, saying that it will actually help protect human beings by removing an old aggressive hunter from the gene pool and fund future rehabilitation efforts. "We’re just helping Darwin along," said Java, another hopeful bidder for the valuable Texan hunting license. "We need to have a broader conversation about conservation," he continued, rather pleased with his own sound bite.

All proceeds from the auction will be donated to the Texan government and will be earmarked for Obama Health Care, a senior official at the Rhino Human Relations Committee said, in an attempt to further legitimize the coming hunt. But the auction has been fiercely criticized by human rights groups in Texas and Suma Tran Rhino de Ceros even received death threats. "The teeth and fingernails of the rare Texan hunter are very valuable on the black market and can sell in China for enormous sums of money," said Immo Ral, a spokesperson for the International Fund for Distressed Hunters.

But Texan rights groups described the claims of the Rhino Human Relations Committee as "perverse" and "a sad joke."

"This auction is telling the world that a Rhino will pay absolutely anything to kill a harmless human hunter," Stew Pid of the International Fund for Distressed Hunters told a press conference in Dallas. "This is, in fact, making a spectacle of killing an endangered species."

More than 80,000 Texans signed online petitions against the auction. At present, it is estimated that there are just 20,000 Texan hunters left.

Experts say that growing demand for the fingernails and teeth of the mature Texan hunter in Asia is driving up instances of poaching. It is being fueled by the belief in countries like China and Vietnam that a powdered Texan hunter’s teeth and fingernail clippings have medicinal powers and can impact diseases like cancer. They can also make the male erection longer lasting. The teeth and fingernails of a mature, adult Texan hunter can sell for around $65,000 per kg.

"The world must act and put a stop to this barbaric and dreadful trade," Stew Pid continued. "As long as there are hunters remaining out there, our battle to save them will continue."