Recent rumblings portend a grim new episode for Syria’s Idlib province. Stretching along the northwestern border with Turkey, Idlib became the last redoubt of forces that oppose President Bashar al-Assad’s regime, namely Hayat Tahrir al-Sham (HTS) and the National Liberation Front,  when Moscow and Ankara announced the creation of a de-escalation zone in the area two years ago. The 2018 agreement halted a Syrian government offensive that would have brought devastation to Idlib. An uneasy calm hangs over the province, but the delicate diplomatic balance that brought respite now looks close to collapse. Notably, Russian Foreign Minister Sergei Lavrov visited Syria in September prompting speculation that Moscow and Damascus are set to make a northward push against rebel forces.

Around the same time, reports emerged of Syrian regime forces shelling opposition frontlines, while Turkey has brought military hardware across the border to bolster anti-Assad forces in the Idlib countryside. Local observers relate that both Russian and Turkish reconnaissance drones have been active over the city of Idlib and the surrounding areas. Syrian forces, backed by Russian airpower, now appear to be hitting HTS positions with more intensity.

Idlib may prove to be the final chapter of the Syrian Civil War. But here, Turkey and Russia are the main players. Turkey has long propped up anti-Assad factions and has maintained a military presence in Syria’s north for several years. Meanwhile, it was the assertive intervention of Russia in 2015 that turned the war in Assad’s favor. Russian airpower has been a key factor in Syrian government forces’ advance toward Idlib and the regime’s ability to reclaim rebel-held territory.

In our research into the impacts of proxy actors in Middle Eastern conflicts, we interviewed a range of Syrian activists. All of them noted a tangle of relationships and alliances between a plethora of Syrian organizations and international sponsors. In particular, they highlighted the roles of Turkey and Russia, both in the conflict and in the humanitarian crisis Syria faces. One opposition figure expressed his gratitude to Turkey for accommodating Syrian refugees. Yet at the same time, he felt that Turkey’s military involvement had made a complex conflict environment more difficult to resolve. Another activist who had participated in ceasefire negotiations in 2015 noted the dominant role that Russia played in securing agreements.

In general, Syrian figures we spoke with expressed concern at the intentions foreign powers may harbor for Syria. The prevalent feeling among our interviewees was that the challenges that Syria faces are ultimately for Syrians to solve and that foreign interventions made solutions even harder to find. Major powers jockeying for an advantage over regional rivals have clear geopolitical goals, the pursuit of which generally overrides the interests of local people.

Even after the Russia-Turkey accord reached in 2018, Idlib has not been spared hostilities. As elsewhere in the Syrian conflict, civilians have borne the brunt of the violence. A UN report recorded “rampant human rights violations” in Idlib and western Aleppo in late 2019 and early 2020 as Assad’s forces pushed to retake the province despite the de-escalation agreement. Up to a million civilians were uprooted, the largest single displacement of people during the entire war. UN investigators detailed numerous instances where pro-regime forces bombarded schools, markets and hospitals. Investigators also accused HTS of indiscriminately targeting civilian areas.

In February, 33 Turkish soldiers were killed in a Syrian airstrike spurring Turkey to undertake a spate of retaliatory attacks. In the wake of this flare-up, Ankara and Moscow reached another deal to curtail hostilities. This latest agreement demonstrates once more that the fates of Syria and its hapless people are largely in the hands of external powers. It seems that the conflict is only in abeyance while powerful actors maneuver for advantage across the chessboard that Syria has become.

In Idlib, the interests of the key players are clear. Ankara wants to maintain a foothold in Syria. Long calling for the removal of Assad and championing anti-regime forces, it plays the role of protector to Idlib’s militias and civilians fleeing the regime’s advance. Should Idlib fall, a new wave of refugees would surge toward Turkey, something that Ankara can ill afford. Russia, meanwhile, retains access to its only Mediterranean naval base thanks to its relationship with Assad, and thus Moscow wants to ensure the Syrian president’s longevity.

Linking Damascus and the northern city of Aleppo, Idlib is a central piece of the strategic jigsaw for Assad. Retaking the province, which has been an opposition stronghold since 2015, would be highly symbolic, drastically weakening rebel groups and being another step toward the regime’s final victory.

Machinations in Moscow and Ankara

Domestic concerns in Turkey and Russia also come into play in what happens on the ground in Syria. Turkish President, Recep Tayyip Erdogan and Russian President Vladimir Putin have both used international adventures to further their own agenda. Erdogan’s approval surged after authorizing forays into Syria against Kurdish-led forces in Afrin in early 2018 and in the northeast in late 2019. More recently he has intervened in Libya in support of the Government of National Accord. For his part, Putin rose to prominence at the turn of the millennium fighting Chechen insurgents and underlined his tough-guy credentials by strutting into Georgia in 2008 in a conflict over the breakaway region of South Ossetia.

Both leaders are currently under pressure, Erdogan as Turkey’s economy falters, and Putin facing criticism after the poisoning of Russia’s prominent opposition figure, Alexei Navalny. Creating a distraction by upping the ante in Idlib would be a convenient way of rallying domestic support. Heightened tensions between Russia and Turkey, each of which backs different sides both in Libya and in the escalating conflict in Nagorno-Karabakh, further complicate matters.

Significantly, other international interventions by Russia and Turkey have been against considerably weaker opponents. Do Eurasia’s two military heavyweights really want to directly face off in Idlib? Turkey and Russia maintain outwardly amicable relations, but they have different goals in Syria. Decisions made in Moscow and Ankara will determine whether the tenuous peace in Idlib endures. Should it fracture, it will be the long-suffering people of Syria, yet again, who will bear the greatest cost.

[*Dr William Gourlay and Professor Shahram Akbarzadeh are based in the Middle East Studies Forum at Deakin University, Australia. This research was facilitated by Carnegie Corporation of New York (Grant number: G-18-55949): “Assessing the impact of external actors in the Syrian and Afghan proxy wars.”] 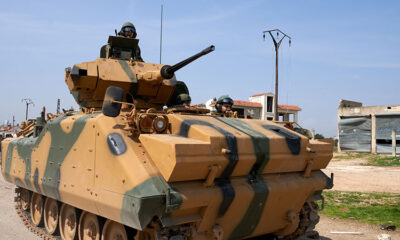 Syria Airstrikes Have No Strategy in Sight