For now, Mohammed bin Zayed is happy to play the director allowing his young star the limelight.

On June 6 in Jeddah, Saudi Crown Prince Mohammed bin Salman (MBS) and his Abu Dhabi counterpart, Mohammed bin Zayed (MBZ), convened the first meeting of the Saudi-Emirati Coordination Council. Abu Dhabi is one of seven emirates that together make up the United Arab Emirates. While Dubai is seen as the financial hub and Sharjah something of a cultural center, Abu Dhabi is the political and military heart of the UAE.

Mohammed bin Salman, 25 years the junior of Mohammed bin Zayed, has a close working partnership with the older man. Together they launched the war in Yemen in March 2015 in response to an offensive by Houthi rebels that threatened to overrun the South Yemeni port city of Aden. That war continues with more than 10,000 civilian deaths — many of them caused by a Saudi-led aerial bombing campaign — and millions facing starvation in what is the Arab world’s poorest nation.

In June 2017, the UAE and Saudi Arabia collaborated in a land, sea and air blockade of Qatar, a fellow Gulf Cooperation Council (GCC) member. The justification for the blockade (which was joined by Bahrain and Egypt) was a fake news story that was planted in local, regional and international media outlets. According to the story, Qatar’s emir, Sheikh Tamim bin Hamad al-Thani, had praised Iran and Hamas while overseeing a military ceremony.

It was quickly and independently established that the likeliest source of the fake story was the UAE and, more precisely, Abu Dhabi. But the damage had already been done. Qatari nationals had been given just two weeks to leave the blockading countries. Families were broken up. Businesses, including the offices of Qatar Airways, were padlocked. For 48 hours, supermarket shelves were empty, but thanks to prompt intervention from Turkey and Iran, and a healthy Qatari sovereign wealth fund, any food shortages were quickly averted.

A year on, the blockade continues, but Qatar remains both resilient and defiant. The four blockading nations, the so-called quartet, have had no significant diplomatic or political support for an action that has ruptured the GCC. Even US President Donald Trump, who had initially tweeted his delight at the blockade, has long since abandoned the pretense that the action, led by MBZ and MBS, is worthy of any support from his administration.

And yet the feud, like the war in Yemen, goes on with no apparent end in sight. Now with the launching of the Saudi-Emirati Coordination Council, the two crown princes have signaled that the GCC is no longer a relevant or useful vehicle to advance their interests. Or as MBZ put it, using his Twitter account, “Our alliance with KSA [Kingdom of Saudi Arabia] is a strategic choice that increases our strength and provides both countries with a promising future.”

Both men share with President Trump and Israeli Prime Minister Benjamin Netanyahu a deep animosity toward Iran. So it is not surprising that talks have been going on behind the scenes not only with key players in the Trump administration, but also with the Israelis. As Adam Entous notes in The New Yorker, MBZ has for many years quietly but assiduously pursued links with the Israelis.

The election of Donald Trump gave him an unexpected opportunity to further his efforts in building an alliance of the willing against Iran. In December 2016, without consulting the Obama administration in what was a clear breach of protocol, MBZ met in New York with Trump’s son-in-law Jared Kushner, key advisor Steve Bannon and Michael Flynn, who was to become for a very short time Trump’s national security adviser until he was forced to resign for lying about his contacts with Russian authorities.

As Entous recounts, the purpose of the meeting was to confirm that the Abu Dhabi crown prince and his young Saudi friend were ready, willing and able to do their part to challenge Iran. He writes that “M.B.Z. wanted Trump’s advisers to know that he and his counterpart in Saudi Arabia, M.B.S., were committed to working with the new Administration to roll back Iran’s influence. Participants in the meeting said that M.B.Z.’s message — that Iran was the problem, not Israel — coincided with Netanyahu’s view.”

Rolling back Iranian influence does not come without its challenges. Dubai, in particular, has a long and mutually beneficial economic relationship with Iran. The UAE accounts for most of the GCC exports to Iran, and in 2016, for example, the Emirates alone accounted for more than 60% of imports from Iran. It is a market that totals $23.7 billion, making Iran the UAE’s largest non-oil trading partner. Most of that business goes through Dubai, which has become the link for other nations to get around sanctions and do business with Iran. Enforcing Trump’s sanction plans to the full degree that the Americans are currently demanding would have a seriously negative impact on Dubai’s economy.

Equally, Dubai’s reputation as an open and tolerant business hub not concerned with foreign military adventures has suffered damage as the conflict in Yemen grinds on. Even so, Dubai’s emir, Sheikh Mohammed bin Rashid al-Maktoum, has had little choice but to go along with Abu Dhabi’s war in Yemen. It is abundantly clear that MBZ, as the deputy supreme commander of the armed forces, is calling the shots in the country’s muscular and aggressive foreign policy initiatives.

As part of that initiative, in the past three years, the UAE has opened three military bases in the Horn of Africa, in the port cities of Assab in Eritrea, Somali’s capital Mogadishu and Berbera in Somaliland. Ports for both trading and militarily strategic purposes are high on MBZ’s the agenda. Indeed, the UAE entered the Yemen War with a clear strategy of securing Aden while supporting a secessionist movement that would see the rebirth of South Yemen as a nation that would fall within the Emirati sphere of influence.

Far less clear is the end game for the Saudis. MBS went into the war with the mistaken assumption that it would be over quickly, within a matter of weeks. Having won a great victory, he would thus burnish his credentials as a warrior leader in the mold of his grandfather, ibn Saud, the founder of the modern-day kingdom. As events proved, the Houthis have thus far proved more than worthy opponents to that vaunted ambition.

Unlike the Emiratis who have committed ground forces in the south, the Saudis, due largely to the poor quality of their army, have settled for a bombing campaign that has pulverized the country. It is they, not the Emiratis, who are receiving international condemnation, even though the UAE has carried out numerous and well-documented human rights violations in those areas of Yemen under their control.

It is the Saudis too who are under fire for accepting an American-driven initiative that wants the Palestinians to take whatever deal they are offered. That would include accepting Jerusalem as the undivided capital of the Jewish state, denying the right of return, and legitimizing and incorporating West Bank settlements into a greater Israel. It is a deal that has been cobbled together by Kushner with the support of wealthy pro-settlement American Jews, and it is one that almost completely ignores the rights of the Palestinians.

We’re committed to strengthening cooperation & continuing our constructive approach. Our alliance with KSA is a strategic choice that increases our strength & provides both countries a promising future. We’re keen to form a nucleus that brings all Arabs together. pic.twitter.com/sTUSdHIcdA

The muted response of the Saudi media, which is tightly controlled by the regime, to the Trump declaration on Jerusalem confirmed for Palestinians and their supporters that the Saudis had crossed the street to the American side. And even though the Emiratis are arguably even more deeply engaged with the Trump administration, it is the Saudis who are seen as having abandoned Palestine.

It is a measure of how well the Abu Dhabi crown prince has gauged his colleague: a young man in a hurry with a very big ego who loves playing center stage. On the other hand, MBZ much prefers to work assiduously behind the scenes. In granting Mohammed bin Salman the stage, he has cleverly avoided most of the international criticism that has found its way to the doorstep of the Saudi crown prince.

As the UAE continues to grow its footprint in Yemen and the Horn of Africa, MBS risks being outflanked as he wrestles with economic challenges at home. He has launched a hugely ambitious economic and social revolution titled Vision 2030. Elements of the plan, such as opening the country to tourism and entertainment, are modeled in many ways on what the Emiratis have already accomplished.

But it is a fact that the Emiratis got there first. And while it is true MBS has consolidated power in a manner unprecedented in the kingdom, the challenges he faces from within his own ruling family, from the religious elite and the citizens of a very conservative country are far larger than anything that Dubai and Abu Dhabi faced as they built their two city states into regional powerhouses.

For now, MBZ is happy to play the director allowing his young star the limelight. However, in one of his tweets about the Saudi-Emirati Coordination Council, he may have inadvertently shown his true hand and the depth of his own ambition. He wrote that “the UAE and KSA are forever joined by a strong alliance characterized by deep historical ties and a common destiny.” Citing 44 projects and joint agreements, he described the relationship as “a model alliance” and the council as a “quantum leap.”

One wonders if there will come a moment when MBS reflects that in the most significant of those joint projects — Yemen, the Qatar feud, Palestine and the Horn of Africa — it is he who is paying the higher price and who is being played. What then for the quantum leap?

Trump Is Playing Peekaboo With the Pandemic 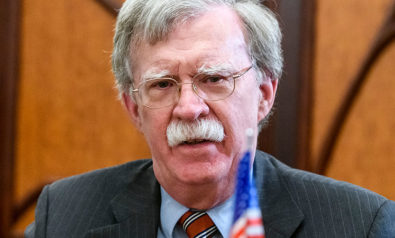