Each image is of a real child, a beautiful child, deserving of much more than our compassion.

The US media obsession with an election that is over a year away would be simply laughable if only the world would cooperate and stand still while America’s flawed democracy coughs up its next “leader of the free world.”

Likewise, the Republican “debate” circus as compelling theater only works if real world concerns are put on hold. The parade of right-wing clowns is only entertaining if you can be sure that no one on that stage will ever be president of the United States.

The problem is the world will not stand still as America’s political drama plays out. Today, it is the images of refugee children in Europe that intrude. Tomorrow it will be something else, somewhere else.

I have a very hard time watching children suffer, partly because I am a father and partly because I am a human being. I cry. I watch the television, and I cry. I have been often in the lands on European soil where suffering refugee children now await a friendly face, a caring touch and a little food. The anguished parents who now tread that soil touch my very core. I take to this space to do what little I can. Yet I feel so helpless.

Assessing blame is the easy part. The blame lies with any and all who believe that peace can be achieved at the point of a gun and that hunger and disease will go away because we wish it to. It lies at the feet of every leader who puts ideology ahead of feeding and healing children, and every arms merchant who sells the instruments that kill children and tear families apart.

And perhaps most of all, the blame lies at the feet of the rest of us who have been so anesthetized to human suffering that many actually believe that thoughts and prayers can relieve that suffering—that a good prayer vigil led by some sanctimonious clergyman is an acceptable substitute for really caring.

Sorry, it isn’t working. It isn’t working in America, where real children go to bed hungry at night, where whole families sleep on the streets or in miserable “shelters” and where real violence interrupts nighttime lullabies.

It isn’t working in Europe right now either, with the corpses of babies washing ashore, and razor wire separating desperate families from food, medicine and shelter.

And it surely isn’t working in much of the Middle East, where religious zealotry makes a mockery of gods and underlying faiths, and where dead children abound in a pool filled to the brim by the bloody hands of righteous Christians, Jews and Muslims.

Really caring will require a lot more than thoughts and prayers can provide. Really caring will mean that Europe and America will have to open their borders and their hearts to a human wave. It is a wave born of desperation with a child’s war-torn face at its crest. Say no if you can, but do so at a steep moral price.

The new wave that is at our shores was initially set in motion by Europeans who drew the national lines that served only European purposes and never had the consent of those cast casually on one side of the line or the other. Before long, and never far away, the United States armed anyone who could pay, declared winners and losers, deposed some governments and mindlessly supported others.

Today, the real human toll always seems lost amid excuses festering with centuries-old internecine religious disputes, long-discredited geopolitical dogma and theoretical terrorist threats from deranged fanatics with little capacity to deliver on much of anything.

Now the wave is upon us. In America, amid talk of creating an 11 million-person immigrant diaspora, there is also talk of finding a home for 10,000 Middle Eastern refugees. In a nation where citizen children go to bed homeless and hungry, what chance will new immigrant children have to be welcomed here and thrive? Perhaps, as they arrive, they will be kept in the same pens with the diaspora children headed in the opposite direction.

Claiming the moral high-ground is an American art form. Americans, and the Europeans who often perch themselves on that high-ground with us, will join those we so often disparage if we collectively turn away from the images of anguished children.

Each image is of a real child, a beautiful child, deserving of much more than our compassion. Each needs food, medicine and shelter. Each needs a place to grow.

Maybe, just maybe, if we can find a way to meet those needs, each child will grow up to care about the human condition. Maybe, each will grow up to reject the anger and hatred that has created their anguish. Maybe one day, they will meet each other and remember together those who really cared.

*[A version of this article was also featured on Larry Beck’s blog, Hard-Left Turn.] 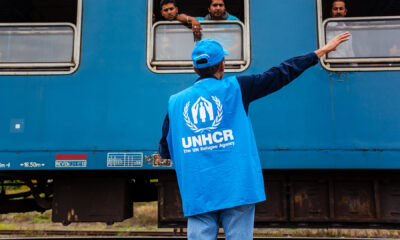