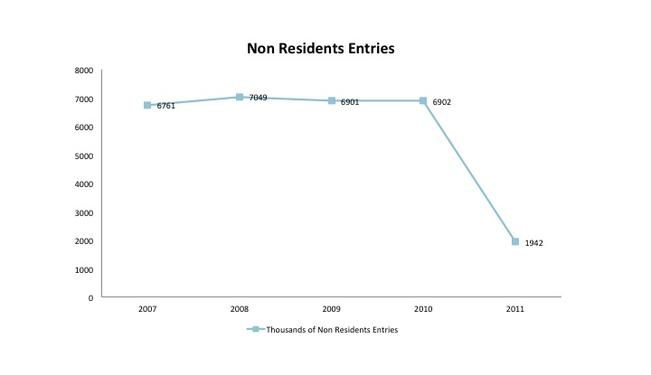 Optimism is starting to fade as the new government struggles to regain control of Tunisia’s economy.

One year after the “Jasmine Revolution” of January 14, 2011, Tunisia has successfully advanced in its democratic transition and political reform process. On October 23, 2011, the election of the National Constituent Assembly (NCA) was well organized, and for the first time in history, it was fair. Al-Nahdha (meaning ‘the renaissance’ in Arabic), a moderate Islamic party won over 41% of the NCA seats.

NCA members elected Hammadi Jbali, the second in charge of Al Nahdha, as Prime Minister. While the NCA is drafting a new constitution, Jbali needs to present quick solutions for the social and economic issues that arose after the revolution. Bearing this in mind, the economic situation in Tunisia has become difficult in spite of the peaceful character of the revolution, since many factors have disrupted the economic recovery.
The Tunisian revolution has been followed by the emergence of social demands, protests, and sit-ins. Many tradeunions have been created and their strikes ensure that the government bears huge charges. In Gafsa – west central Tunisia – a large number of young unemployed people blocked the carriage of phosphate destined for export. Consequently, the losses of the phosphate exports reached approximately $300mn in 2011. Jbali announced on January 22 that total losses have since amounted to $2bn dollars.

These problems hindered the interests of foreign investorsas a result of which, foreign investment decreased by one-third and 82 enterprises left the country. In parallel, the number of tourists critically fellfrom approximately 7mn in previous years to less than 2mn in 2011. As a result, many companies and hotels have dismissed their employees.

The number of unemployed in Tunisia has exceeded 800,000, which is an alarming figure in a country whose population is about 11mn. The unemployment rate has reached 18%, compared to 14% in 2010. The additional number of unemployed people has further worsened the economic situation and deepened the social crisis.

Not surprisingly, Tunisia has dropped by eight ranks in the Global Competitiveness Report (Tunisia is ranked 40th at world level) – published by the Davos World Economic Forum – compared with last year rankings. In other words, the business and investment climate has been affected by events last year and the unclear economic policy of the government.

Tunisia’s economy also struggled due to the Libyan war. Foreign trade was dramatically affected since the Tunisian economy depends heavily on exports to Libya. In addition, hundreds of Tunisian workers were required to return from Libya, which meant they lost their jobs and called onthe government for financial support. Moreover, Tunisia’s sheltering of thousands of refugees escaping from the civil war in Libya was a costly humanitarian project for its government.

The euro crisis represents an additional problem for the economy since 80% of Tunisia’s exports are devoted to Europe, its foremost trade partner. The recession in Europe has also reduced the currency transfers from Tunisian immigrants to Tunisia. As a consequence, the annual growth rate of the economy has fallen from 4% to 1.9%

As a result, the Jbali government has focused on receiving financial aid and loans from rich countries in order to promote Tunisian economic activities through infrastructure projects and the recruitment of thousands of civil servants. In other words, the government has adopted the Keynesian fiscal stimulus to boost the economy, as sucha policy is considered appropriate when unemployment is high. Tunisia has already received donations and loans;accordingly the government expects to realize a growth rate of 4% in 2012. In addition, the end of the corrupted regime of the former president, Zine El-Abideen Ben Ali, could improve the economic situation since Tunisia was losing three points in its growth rate every year due to corruption.

Despite these reasons for optimism, Tunisians have not yet noticed significant change. The same problems remain. State institutions became weak after the revolution as people enjoyed their unlimited sensation of freedom. Security forces and other control services have failed to ensure stability and public order. Even civil servants have sometimes felt insecure in their offices due to the use of violence at protests, as the government is still not controlling the country properly.

As a result, the economic recovery has not started yet for two main reasons. First, the political discourse of the current government does not have enough strength to direct Tunisians towards the same goals. It is essentially a problem of communication between the government and citizens, who have high expectations after the revolution. The silence of the government has increased the fears of citizens as well as foreign investors. People are unaware of the real challenges and difficulties of this phase. Some observers explain the critical situation due to the lack of experience of the current ministers, who were in the opposition for many years. Meanwhile, the minister of finance has argued that the government cannot present any plan before the budget rectifications in March 2012.

Second, the current political reform process has not been followed by either new administrative measures or law reforms. The government should present a clear plan and then quickly turn them into actions and respect good governance characteristics, particularly the rule of law. In fact, the state needs to recuperate its strength to fight economic obstacles such as anarchy, smuggling, and tax evasion. The realization of the expected public and private projects depends on the security situation.

Therefore, the government should now reassure citizens, investors and organizations that the situation is improving and is under control. It should also find the appropriate communication channels to show its efforts and achievements. Even if the current government is working hard, nothing will change without promotional efforts. Moreover, work cannot be provided for all the unemployed without proper communication.

In fact, all the current Tunisian economic problems seem to be related to political will. Human and financial resources are available but the government needs to reinforce the means of work. Therefore, the success of new democratic reform in Tunisia depends on accelerating the economic recovery, which will reflect upon political stability, good governance, and social harmony.