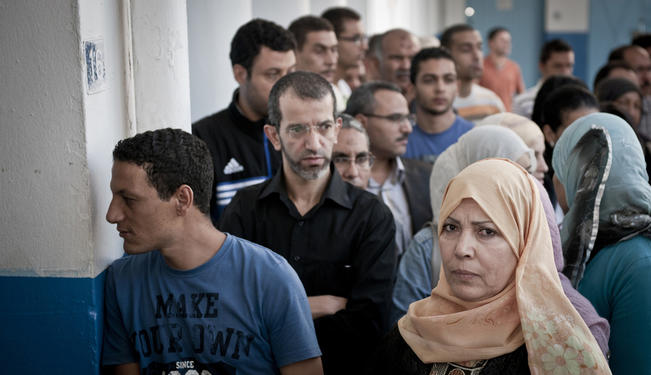 The Tunisian democratization process is an outcome of negative developments in Arab states.

Once again, Tunisia is now considered to be the democratic frontrunner in the Arab world as well as the last remaining hope of the Arab Spring. Its new constitution, passed by the National Constituent Assembly on January 26, is unparalleled in terms of political and religious freedoms, the relationship between religion and politics, and gender equality.

Perhaps even more importantly, the small North African country exemplifies how a national dialogue process, backed by persistent civil society intermediaries and international support, can reach a consensus on the fundamentals of a new political system even in a highly polarized society.

In a region where political conflict is usually "solved" by force or repression, Tunisia impressively demonstrates that the process of negotiation might be tough, however, it is bound to produce more democratic and presumably more sustainable results.

The people and regimes in the entire Arab world will keep an eye on Tunisia. The people because they consider the country to be a role model, and the rulers because they see their power being threatened by the first real Arab alternative to their own authoritarian systems.

Learning a Lesson from Egypt

The removal of former Egyptian President Mohammed Morsi in July 2013 and the following repression of the Muslim Brotherhood acted as a wake-up call for key political actors in Tunisia. This is particularly true for the Islamist Ennahda — the dominant party in the previous government coalition.

Ennahda, throughout its history, has always been more progressive and tolerant in its vision of political and social order as opposed to the Egyptian Muslim Brotherhood. Still, the Ennahda-led government made efforts to Islamize the social sphere and sought to enshrine Islam as the state religion in the constitution.

After Morsi’s removal, representatives of Ennahda publicly expressed their concern over a similar development in their own country. As a result, the party learnt a lesson from events in Egypt. Ennahda engaged seriously in the national dialogue process and showed a surprising willingness to compromise as the constitution was drafted.

What is more, Ennahda – due to the pressure from the street and the parliamentary opposition – declared that it would resign in the national interest to make room for a "caretaker government" until the next elections, which is expected to take place in autumn 2014. Notably, the party kept its word and stood down.

Thus, for the first time in the Arab world, an Islamist-dominated government which rose to power through elections had relinquished its role at the top..

The Tunisian opposition has also learnt lessons from Egypt. At first, the opposition felt encouraged to call for the toppling of the Islamist-led government. However, the bloody confrontations in Egypt convinced key opposition figures, such as former Prime Minister Beji Caid Essebsi, to enter direct and serious dialogue with the leader of Ennahda, Rachid Ghannouchi.

Moreover, the rise of Jihadist groups in Libya, the Sahel region, and Syria had an impact on Tunisia’s domestic political process. Initially, the Ennahda government more or less turned a blind eye to potentially militant Tunisian Salafis. Also, no obstacles were put in the way of young Tunisians departing for Syria to join the battle there.

Yet Ennahda again – even if hesitantly – drew its lessons from homegrown militants’ linking up with international Jihadi actors and engaging in violent attacks against Tunisian security forces. The Islamist Ennahda party dissociates itself explicitly from the potentially militant Salafi camp. Classifying the Salafist group Ansar al-Sharia as a terrorist organization in August 2013 was but one example of the government’s new strategy.

The increasing anarchy in Libya, where weapons circulate freely and Jihadists can move undisturbed, further reinforced the readiness for dialogue between the government and the opposition in Tunisia.

While Libya continues to gradually fall apart, Tunisia’s political elite as well as important social forces have become acutely aware that only by standing together will they be strong enough to face the challenges of building solid state institutions in a difficult regional environment.

Egypt's Impact on Morocco and Algeria

Apart from Tunisia, Morocco and Algeria have also drawn lessons from the events in Egypt, although not necessarily in the sense of democratization. For example, the Moroccan king has used the events in Egypt to weaken the Islamist ruling party, the Justice and Development Party (PJD), through a cabinet reshuffle. The PJD, probably with an eye on Egypt, has accepted this more or less without complaining.

In Algeria, the Muslim Brotherhood criticized the reception of the new Egyptian foreign minister. But, even though they have decided to boycott the upcoming Algerian presidential elections in April, their oppositional rhetoric in the domestic sphere is subdued these days. With Algeria's civil war in the 1990s, Islamists have a strong interest in demarcating themselves from their violent "brothers."

Such political learning processes are not new. But thanks to Facebook, Twitter, and the intense media coverage of pan-Arab television stations, the Arab public is informed about events in other states faster and better than ever before. This has increased the pressure on political elites to act. Lessons have to be drawn faster – this can be an opportunity, as Tunisia has shown.

Of course, it cannot be assumed that political actors will follow Tunisia's lead or the wider region's developments — that of which are considered to be the "right" ones from a Western democracy-orientated perspective.

But particularly for Western (foreign) policy actors, it is important to act in accordance with these fast learning and adaptable processes. In the short-run, the Tunisian way may not be an export hit.

However, if Arab populations, for instance in Egypt, see that democratization in Tunisia continues to progress thanks to the inclusive national dialogue and that such progress leads to substantial European support for the economy, this may in the medium-term act as an incentive to pursue the path of dialogue.

*[This article was originally published by Stiftung Wissenschaft und Politik (SWP), and translated from German to English by Jessica Noll.]