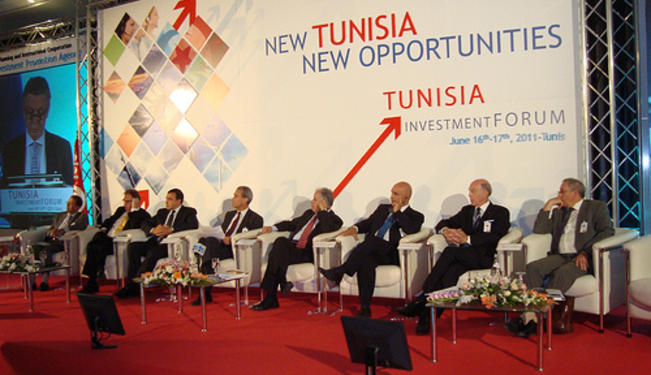 An overview of German efforts and investments to help the Tunisian economy recover.

Tunisia, the country where the protests in the Arab world began over a year ago, still remains at the forefront of the democratic movement of the so-called Arab Spring. As leader of this reformation of governmental and societal structures, Tunisia is often seen as an example for possible scenarios of upheavals in other countries. Keeping in mind their important particularities, these countries aim at similar goals that all demand great fortitude. Therefore, economic slumps in particular would have disastrous implications on the stability and process of change.

How is the political development currently advancing and what challenges as well as new economic prospects lay ahead?

Since protests against high (youth) unemployment and for more political freedom began on December 17, 2010, the political situation in Tunisia has changed dramatically. The former President Zine al Abidine Ben Ali fled to Saudi Arabia in exile and the interim government held the first free and fair elections on October 23. The election, which showed a turnout of 90%, was highly valued by European elections monitors.

Despite the Islamist party En-Nahda winning 90 seats – making it the strongest force in the constituent assembly – the party does not have an absolute majority. En-Nahda, which characterises itself as an ideological offspring of the Turkish AKP, is followed (in terms of seats) by the secularist party Congrès pour la République (30 seats) and the social democratic party Ettakol (21 seats). Although the election result was hardly surprising, it raises international as well as national concerns. Protests of thousands of Tunisians right after the results were announced showed the fear of an Islamisation of the liberal and secular country.

This liberality is the achievement of a steady development since the country achieved independence from France in 1956. On June 1, 1959, the constitution, which will now be renewed, came into effect. In the following 31 years Tunisian politics was dominated by Habib Bourguiba, who created a strict single-party system and set boundaries to fundamental Islamic trends. He supported an emancipator development and abolished Islamic polygamy. Following a nonviolent coup d’état in 1987 Bourguiba was deprived of power and replaced by Ben Ali, who ruled for the next five consecutive terms. In the most recent presidential election in October 2009, before the revolution began, Ben Ali was re-elected with 89.62%.

The to this day Tunisia’s valid constitution ensures equality of all citizens, the respect of human rights, and an independent judiciary. Since 1987 fundamental reforms have been realized in order to further the process of democratisation and strengthen the rule of law. Tunisia fortified the rights of women and children and ratified the Universal Declaration of Human Rights. As a result, Shari’a’s legislative base was abolished at an early stage. At the time of the revolution, only few regulations in Tunisian law originated from Shari'a. The Tunisian judicial system is based on the French Code Civil and only its roots occasionally stem from Islamic law. Despite this, for the region’s avant-garde legislative position, Tunisia was ruled by a rigorous dictatorship with repressive methods and structures.

Only the future will tell if En-Nahda, the moderate Islamists, keep their promise to abide by a democratic form of government that will ensure human rights.

Due to a successful economic diversification and a high productivity, Tunisia stands out in regional comparison. As contrasted with other Arab countries, Tunisia has only little oil and natural gas resources at its disposal, which are merely exploited for its own use. In light of this shortage of natural resources Tunisia has achieved a diversified economy, which can operate largely independent from the international oil market. In 2010, Tunisia was able to increase its export, which is mainly directed to the European Union, by another 16%. The well-developed infrastructure, as well as the geographic proximity to Europe, is a vital factor in attracting numerous investments from Europe.

Following Italy and France, Germany is the third largest investor and thereby a great contributor to the annual €1.2bn foreign investment. Among the 3000 foreign companies in Tunisia, 280 are German. These are mostly located in the export-oriented industries such as textiles, electronics and automotive supply industries.

Even though the constant high growth rate of about 5% in the last ten years cannot be upheld during turbulent times like the revolution, Tunisia has seen a positive development. Especially in the field of direct foreign investment, a quick recovery can be observed.

Despite a sharp fall of about 25% of investments in the beginning of the year, the overall decline in the first half-year of 2011 accounted for only 11.4% compared to the year before. This, and the fact that in the first half year 85 new companies with foreign contributions started business, raises hope that the trust of the foreign investors will return sooner than expected at full volume. Analysts have also predicted a higher willingness of Tunisian companies to invest following the overthrow of the Ben Ali regime. Martin Kalhöfer, divisional director Africa/Middle East of GTAI (Germany Trade and Invest), explained this at the Maghreb-Forum of the Euro-Mediterranean Association for Cooperation and Development (EMA) in October, referring to the emerging freedom from which domestic entrepreneurs will benefit and gain new motivation.

Additionally the immense number of unemployed graduates (44.9%), which has been seen as a catalyst for the revolutionary movement, is an important economical factor for investors. A representative of Dachser Intelligent Logistics, an EMA-member active in Tunisia for more than 20 years, argued this at the EMA Hamburg Business Dayin April 2011. Rüdiger Erb emphasised that this surplus of human capital combined with the prospect of better business conditions – by cutting red tape and fighting corruption – constitutes great potential especially for European companies. Nevertheless many experts also stress the shortage of specialised knowledge in Tunisia. For example, on numerous occasions the former UN Coordinator Taoufik Ben Amara has underlined the importance of know-how transfer to Tunisia.

For a fast and sustainable economic recovery, the tourism sector also needs to improve soon. The sector will play an integral role in the economic upturn, especially regarding the employment of lower salary earners.

Despite all the difficulties, the projections of economic development in Tunisia remain positive, due to its location factors. The IMF, for example, attests that Tunisia will see a 3.9% growth in GDP in 2012 alone. By way of comparison, in 2010 it was 3.1%.

The integration of Tunisia into the European Free Trade Association also carries great potential for a sustainable economic upturn and viable European investments. Commercial experts acknowledge additional potential growth of one to two percent, if the new government is successful in fighting corruption and assures transparency. Nevertheless the economic and political process of transformation heavily depends on the improvement of youth employment and a decline of regional disparities. EMA-member Rüdiger Erb put it in a nutshell when stating that “the stone was set in motion and now it has to be paid great attention for it to keep on rolling”. With the aim of not letting this stone get stuck in the swamp of corruption and regional unbalanced growth, the German development cooperation plays an essential role.

In this context Germany is next to being an important bilateral economic partner as well as a central development partner for Tunisia. Pivotal areas of German-Tunisian development cooperation are traditionally environmental protection and the modernisation of the Tunisian economy. In addition to regular financial aid for Northern Africa, the German Federal Government plans to allocate another €100mn for the transformation process in Northern Africa for the years 2012/13. According to Klemens Semtner, head of the division for transformation partnerships at the Federal Foreign Office, Tunisia will be the focus of this additional funding.

Allocating sufficient financial aid however will not be enough in order to sustainably foster economic growth in Tunisia and the region as a whole. The Tunisian consul to Hamburg, Mohamed Imed Torjemane, pointed out that the region has to be seen and dealt with in the context of a collective faith in order to create room for shared solidarity.

The overall developments in Tunisia raise hope for a bright and prosperous future. Now all efforts have to be combined in order to not only utilise the emerging opportunities but simultaneously support the endeavours of the Tunisian people for a democratic social order.

*[This article was translated from German to English and was originally published by the Euro-Mediterranean Association for Cooperation and Development (EMA)].