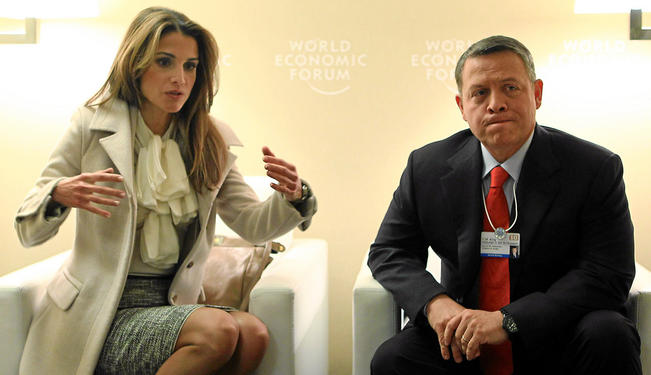 Despite the political upheaval in the Middle East, it is too soon to determine whether King Abdullah will be toppled. However, there seems every reason to believe that once the Syrian conflict reaches a conclusion, Jordan could be next in the crosshairs.

Calls for change have returned to Jordan, with large crowds demanding social, economic and political reform and objecting to the rising cost of living, high levels of unemployment, corruption and autocracy. As the Arab Awakening enters its third year, the resilience of King Abdullah’s regime is being tested as never before. Its ability to successfully exploit division among the political opposition, continue to receive economic assistance from the Gulf Cooperation Council (GCC) and sell its reform agenda to the Jordanian public will ultimately determine its fate.

The Overthrow of King Abdullah: A Possibility?

The Jordanian government has tolerated a “loyal opposition” for decades. The Jordanian Muslim Brotherhood — founded in 1945 by merchants committed to waging Jihad against Zionists in the British Mandate of Palestine —has for many years constituted the center of this opposition. The Jordanian Muslim Brotherhood’s political wing — the Islamic Action Front (IAF) — has called for a nullification of the peace treaty with Israel and transforming Jordan into a constitutional monarchy. Historically, the movement has worked within the system and cooperated with the monarch on a host of issues, such as oppressing communists and promoting literacy campaigns. However, the opposition has not previously staged protests deviating from a well-defined script. The size of such demonstrations have rarely exceeded several hundred, and no direct challenges to the king were made.

The nature of the protests that began last year suggest that the government may be losing control over what was once ‘confined’ opposition. The size and scope of recent protests, direct challenges to the king, and the regional context are all unprecedented. These new dynamics imply that King Abdullah’s regime is highly vulnerable to the forces that brought down the leaders of Egypt, Tunisia and Yemen. In absence of significant change – not only in terms of how the government represents the people and governs, but also how effective or ineffective it is in raising living standards going forward – King Abdullah faces the very real possibility of being overthrown.

The issue that united most protestors last November was the decision to cut fuel subsidies, which adversely affects low-income Jordanians who have suffered the most from the rise in living costs. The government defended the spending cut on the grounds that they were necessary to reduce the deficit, which has surpassed 10 percent of government spending, and in order to receive a loan from the IMF. Furthermore, since the natural gas pipeline in the Sinai – which Jordan depends on for the importation of inexpensive natural gas — has been attacked more than a dozen times following the Egyptian uprising, Jordan has been compelled to import more expensive sources of energy from Saudi Arabia, exacerbating its energy dilemma. Many recent protests have also focused on perceived corruption, with objections being raised in particular to the glamorous lifestyle of King Abdullah’s Palestinian wife, Queen Rania.

What has limited the impact of the rallies thus far is the opposition’s lack of unity. While some quarters advocate a constitutional monarchy and call for King Abdullah to step down, others would like the king to remain in power but do more to address the nation’s problems. The monarchy retains varying degrees of legitimacy within certain conservative opposition factions. Violent outbreaks between the king’s supporters and opponents in recent months highlight how loyal certain circles remain to the king. Tensions between trans-Jordanian nationalists (often referred to as “East Bankers”) and Islamist Palestinians further divide Jordan. Proposals that a more representative parliament be adopted are not popular with many trans-Jordanians, as such reform would further empower Jordanians of Palestinian origin, the Muslim Brotherhood’s largest base of support. The Brotherhood and other opposition groups frequently argue that a more representative system of government would rein in corruption and require greater accountability.

The Syrian crisis constitutes a major dilemma for King Abdullah. By training Syrian rebels inside Jordan, Amman’s interests appear to be aligned with Turkey, Saudi Arabia and Qatar vis-à-vis regime change in Damascus. But the prospect that radical Islamist factions may gain the upper-hand in the Syria conflict should also trouble King Abdullah. The Jordanian monarchy’s secularism, the Jordan-Israel peace treaty, and King Abdullah’s historical cooperation with the US military have made the king resented by many Islamic extremists.

The king must fear that his monarchy may be targeted next by militant jihadists if the Ba’athist regime in Syria falls. Moreover, the threat of chemical weapons being deployed by either side in the Syrian conflict is being taken seriously by Jordanian authorities, who have met with US, British and Israeli officials to discuss plans for responding to any chemical attack that threatens Jordan. Moreover, the Kingdom hosts more than a quarter million refugees from Syria, for which the financial burden will only worsen the nation’s plethora of economic problems.

That said, many of King Abdullah’s opponents fear Al-Qaeda affiliate groups more than they resent the palace. As Jordanians observe the influence of Salafi extremists in post-Gaddafi Libya, post-Hussein Iraq, and Al-Nusra’s rise within the ranks of the armed Syrian opposition, King Abdullah’s argument that his legitimacy has been earned by protecting Jordanians from the violence that surrounds the Kingdom is generally well received by many of his people. Last October, the regime foiled an Al Qaeda plot to attack several sites in Jordan. All eleven plotters were Jordanian nationals with connections to Al Qaeda in Iraq, who acquired their weapons in Syria. Clearly, the region’s conflicts have already had a spillover effect in Jordan. The king is positioned to effectively exploit these crises for political gains as his legitimacy is challenged.

Abdullah and the GCC

As a landlocked country without oil, Jordan’s economy has been foreign-aid dependent. Last year, Saudi Arabia, Qatar, Kuwait and the United Arab Emirates each agreed to provide Jordan with $1.25 billion in aid. Without question, the GCC’s financial support for the Kingdom reflects Jordan’s strategic importance to the Gulf monarchies. While certain GCC states were quick to provide military, financial and diplomatic support for rebels in Libya and Syria, none of them — Saudi Arabia in particular — have any interest in King Abdullah falling from power.

The fall of the Hashemite Kingdom would further underscore Saudi Arabia’s geostrategic vulnerability in the Levant, especially if forces hostile to the Saudi royal family were to assume power in neighboring Jordan. It is within this context that Amman is likely to acquire more financial support from the GCC if deteriorating economic conditions continue to bring Jordanians into the streets. It is not certain that GCC aid would be an effective counter-weight to all of Jordan’s ills, and some assistance will likely come with strings attached.

On January 23, 2013, parliamentary elections will be held for the first time since the Arab Awakening began two years ago. Electoral law reform aimed at making Jordan appear to be on the path of democratization will take effect this month. However, the IAF’s boycott of the election, along with widespread skepticism regarding the king’s reform agenda, will underscore the monarchy’s preference to rein in the opposition within the scope of the existing system. Additionally, recently adopted anti-corruption measures have been dismissed by some opposition members as merely tactics of distraction. It is unlikely that the election or the regime’s top-down reforms will placate the Islamist opposition, or bring the king’s opponents over to his side following the election.

Many foreign governments are paying close attention to events in Jordan, as the stakes are high. King Abdullah’s regime has long served as a linchpin of US Middle East foreign policy, has cooperated closely with the US on military policy, and is one of only two Arab states at peace with Israel. The IAF’s approach to foreign policy implies that Amman’s relationship with Washington would change if the Muslim Brotherhood ran the country – similar to what has occurred in Egypt. The Muslim Brotherhood-led government in Cairo, the unknown future of a post-Assad order in Syria, and the possibility of civil war returning to Lebanon all constitute new security dilemmas for Jordan and Israel. In this context, Washington and Tel Aviv will face grave challenges if King Abdullah’s rule collapses.

The Jordanian regime has withstood many challenges to its rule since Jordan gained independence in 1946 — during the Arab-Israeli wars of 1948 and 1967, the Nasserists’ attempted coup in 1957, the events of Black September in 1970, and Al Qaeda’s attacks in recent years— but the Hashemite monarchy has proved resilient. The deep ethnic, tribal and ideological divisions in Jordanian society create wedges that the regime has managed effectively in the past and will perhaps continue to do so. The Syrian crisis threatens Jordan’s security, with the potential to distract Jordanians from widespread corruption, human rights violations and economic ills, thereby making stability the top priority. Thus, while it is still too early to determine that the winds of change blowing through the Middle East will topple King Abdullah from his throne, there seems every reason to believe that once the Syrian conflict reaches a conclusion, Jordan could be next in the crosshairs.

*[A version of this article was originally published by INEGMA.]