The ceiling of Hagia Sophia in Turkey. © LALS Stock / Shutterstock

Hagia Sophia, with a history of 1,500 years hosting different religions, will now be reconverted from a museum into a mosque. This recent shift after a Turkish court decree has sparked extensive debate internationally, and we are now seeing political maneuvers heating up fault lines that divide humanity. While some are in favor of transforming the former church in Istanbul, others are opposed to it. Yet both sides have sparked arguments that involve religion, culture and history, which have always been topics of debate.

Irrespective of stance, fabricating dualities between religions, nations and civilizations over Hagia Sophia directly contradicts the genuineness of accusations about its preservation as a cultural heritage site. Hagia Sophia and its historical role encapsulate various forms of power, such as state capacity, religious significance, symbolic power and historical role.

Why Making Hagia Sophia a Mosque Again Is Good News

Since the sixth century, Hagia Sophia, which literally translates as “sacred wisdom,” has acquired a universal meaning and role as a museum. Building on the varying forms of power it has embraced and disseminated, today, we should be cognizant of the inclusive role it can play as a space of faith. Hagia Sophia’s historical significance is best understood if it is appreciated with its spatio-historical presence instead of its place-based legal-jurisdictional status. It is natural to debate and assume a position over this transition, but not at the expense of its sacredness and universality across time and space stretching across civilizations, religions and humanities.

What needs to be discussed should revolve around the representation of Hagia Sophia as a mosque — a discussion that invites humanity to act collectively to address global dialogue. What humanity needs is for the people of the world to become “citizen pilgrims,” which is a term that Dr. Richard Falk, a professor at Princeton University, referred to in a recent speech at Hamad bin Khalifa University in Qatar about bringing communities together to work for a better future for all.

A “citizen pilgrim,” as Falk defined, “is a person with a trusting faith in the unseen yet desired end of human endeavors. Such a person engages in struggle and conceives of his or her life as a spiritual journey or pilgrimage toward a better future.” With this mindset, we would be able to establish a path that is genuinely devoted to working toward human and global interests.

Hagia Sophia has the potential to represent the power of faith and to unite instead of divide humanity, and its current unilateral role with the reconversion into a mosque should not compromise this important capacity. As an example, there has been a surge in faith-based organizations and religious leaders showing strong commitment and sensitivity to the 2030 Agenda for Sustainable Development. A case in point is Religions for Peace, a multi-religious coalition that recently held its third plenary session in Germany entitled, “Advancing Shared Well-Being by Promoting Just and Harmonious Societies.”

There has been an annual call to action where stakeholders raise awareness and attempt to accelerate efforts to meet the UN Sustainable Development Goals (SDGs), which is also known as the Global Goals. While governments, transnational organizations and civil society have long been involved in advancing the 2030 Agenda and the SDGs, we are now witnessing greater participation by players from a variety of sectors and industries such as faith-based actors. With its legacy and inclusivity between different religions, empires and states, Hagia Sophia’s universality may be a new driving force for uniting humanity toward the Global Goals.

To understand this perspective further, we need to dive into the history of Hagia Sophia. It was not a regular church; it has always symbolized unity. Most people merely see a materialistic transformation of the Hagia Sophia from a church to a mosque, but that is not necessarily the case. The church that became a mosque under the Ottoman Empire was not deprived of its Christian characteristics, and those remained essential elements of the building.

As the Muslim historian Sa’d-ud-Din observed a century after the Ottomans conquered Constantinople, the former name of Istanbul and the capital of the Byzantine Empire, “The hearts of those who bear witness to the single nature of God rejoiced at the erection of the true symbol of faith.” Hagia Sophia represents the unity of faiths, not the division.

The Importance of Representation

According to Richard Winston in his book, “Hagia Sophia: A History,” the hierarchies of patriarchy and clergy, emperor and court converged and symbolized the citizen of Constantinople, a community that is heavenly and majestic. Moreover, Hagia Sophia was not only about space but also light. The space is dynamic, but the light is transcendental. Besides the natural sun and moonlight that shone in through the windows, it was filled with lamps and candelabra.

These are merely metaphors in his book that can be used to reflect the universality and space-free understanding of what used to be the church. It was not entirely about spatial architecture, but rather about what it represented.

Winston states: “The creation of Hagia Sophia was a task that called not merely for the technical skill of the engineer but for the intellectual equipment of the scientist and the imaginative perception of the artist; it called for a man who combined the daring of an innovator with the esthetic vision of a genius.” This description of how the church was created is exactly what we need in many aspects of today’s world. We require a combination of technical knowledge with morality, ethics and so on.

This is why faith plays such an important role in society and in achieving the SDGs. Advancing the world does not and cannot rely solely on technical applications. It requires communities and faith groups to contribute their knowledge and influence.

*[The views expressed are the authors’ own and do not necessarily reflect the official stance of Hamad bin Khalifa University.] 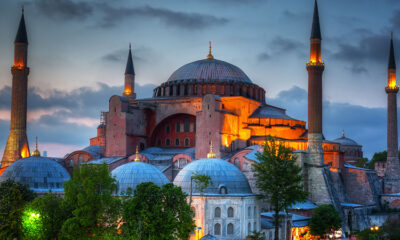 Why Making Hagia Sophia a Mosque Again Is Good News