The reaction to the decision by Turkish authorities to turn Hagia Sophia from a museum back into a mosque has been illuminating. Turkish President Recep Tayyip Erdogan is accused of playing religious politics. If so, he is not alone. When Pope Francis describes himself as “pained” by the news and says his thoughts are with Istanbul, as if some natural disaster had befallen the city, he too is playing religious politics.

The fact that this building — with one of the largest freestanding domes in the world — has stood the test of time and conflict at all is a miracle. Yet since 1934, it has stood silent, but for the passing voices and feet of tourists, as a museum.

Given its stature as a place of spirituality, this is an astonishing fact. Imagine the Notre Dame in Paris or St. Peter’s Basilica in Rome — or indeed the myriad religious sites built upon older religious sites — spending close to a century as museums.

Despite this, the media in the West have been almost uniform in their condemnation. UNESCO, which designates the building as a World Heritage Site, has criticized the move. Western media have noted the reaction of liberals in Turkey, lamenting the undermining of the secular state.

The condemnation is, of course, based on a key distinction between Hagia Sophia and the likes of Notre Dame and St. Peter’s Basilica. The distinction — emphasized in almost every media report — is that Hagia Sophia was built in 537 by Justinian as the seat of the Eastern Orthodox Church and the spiritual center of the Byzantine Empire. It only became a mosque in 1453 with the conquest of Constantinople by Ottoman Sultan Mehmed II.

Given this history of conquest, it’s a wonder that Hagia Sophia is here at all. Consider the religious sites desecrated by conquerors with new faiths, from the Temple of Solomon to the Bamiyan Buddhas. Yet Mehmed II’s first act was to hold the Islamic Friday prayers in Hagia Sophia. He may have been a Muslim, but he recognized the sheer spiritual power and majesty of this building and honored it.

The Ottomans removed icon frescoes and mosaics and replaced them with Arabic calligraphy, but the spiritual life of this amazing building continued under new owners. That is a testament to the building and the comparative moderation of the conquerors.

The Mezquita of Cordoba

The idea that Hagia Sophia is a museum, and that this is a balanced compromise between faiths, has become received wisdom. Yet the truth is that turning Hagia Sophia into a museum was hardly an act of religious tolerance. Far from it, the move was a culminating act in a decade of cultural revolution in Turkey, in which the regime of republican leader Mustafa Kemal Ataturk pulled up the Ottoman inheritance by its roots.

It was not a generous gesture to the Greek Orthodox Church, but a symbolic attack on the power of Islam in Turkey. It remains that to this day. Unspoken in today’s debate is the fact that Hagia Sophia became a museum in an era when the Sufi brotherhoods of Turkey were outlawed, the adhan (call to prayer) could no longer be called in Arabic and religious dress was prohibited. Into recent times, Sufism has remained persecuted and the whirling dervishes perform for tourists — rites that the secular establishment had largely destroyed in any real sense.

Given this backdrop, the conversion of Hagia Sophia into a museum takes on a different complexion, as if spirituality itself were a museum, which is after all what Ataturk intended by such a move. Turning the building back into a place of worship can then be seen as one more step in the reemergence of an older Turkish cultural inheritance.

The fact that Hagia Sophia was once a cathedral is no barrier to it now being a mosque. Consider the Mezquita in Cordoba, one of the finest architectural monuments in the Iberian Peninsula (and itself built on the site of an earlier Visigoth church). It was perhaps the greatest mosque in Muslim Spain, before being converted into a cathedral in 1236 by King Ferdinand of Castile.

Today, a cathedral stands in its center and it remains illegal for a Muslim to kneel there in prayer. Yet few Spaniards would countenance it being converted into a museum as an act of magnanimity toward Islam, nor are there calls from global institutions for Spain to do so. Requests by the Islamic Council of Spain to allow Muslim prayer have been opposed by the Vatican and Spanish ecclesiastical authorities.

The Loss of Greek Anatolia

Converting Hagia Sophia back into a mosque reflects the present reality of modern-day Turkey, which is that of a Muslim-majority population. Just as you expect Westminster Abbey in London to be a Christian place of worship, it’s natural that Hagia Sophia should be a Muslim place of worship, with due interfaith dialogue and public access.

This contemporary reality doesn’t negate the very real tragedy of the loss of Greek Anatolia. That loss is far more recent than 1453. The same regime that turned Hagia Sophia into a museum was also responsible for the ethnic cleansing of Anatolia of Greek Orthodox communities. Over 1 million Greeks were forcibly removed from their ancestral homelands and sent as refugees to modern-day Athens and Thessaloniki.

Today, you can wander through their empty churches in Cappadocia, in central Anatolia, or at sites like Karmylassos (Karakoy) in southwest Turkey, where an entire ghost town is left sprawled on the hillside as a brutal reminder of the wholesale removal of a people and culture.

In Support of Islam

Yet the violent forces that produced that ethnic cleansing also produced the zealous ideology of Westernization that uprooted the Ottoman legacy in the land of modern Turkey. It means a seam of bitterness and division runs through the very heart of the modern state.

To welcome it is to support moderate Islam. To not do so is to leave moderate Muslims in a curious bind, not wishing to create conflict, yet expected to disapprove of seeing the spiritual centerpiece of Turkey’s largest city being devoted once more to worship. It also turns the building into a focal point for the more extremist.

The remarks of Pope Francis are astonishing for a religious leader. That he is “pained” by the idea of such a site of spirituality being turned from a museum back into a place of worship smacks of the worst kind of bigotry. Must it only be “my god” who is worshipped, both here and in former mosques elsewhere?

Equally, secular outrage is disingenuous. This is a religious building. The secularists are right to resist attempts to constrain their lifestyle, such as the prohibition of alcohol or sexual freedoms, just as Muslims in Turkey have chafed at secular restrictions on their own lifestyles. But Hagia Sophia is a religious space, first and foremost.

The historic mistake was turning Hagia Sophia into a museum in 1934, in a cultural revolution that has impoverished Turkish society ever since. Whether the pious nationalists of the ruling party will usher in a moderate or yet more divisive era for this unique building, only time will reveal. 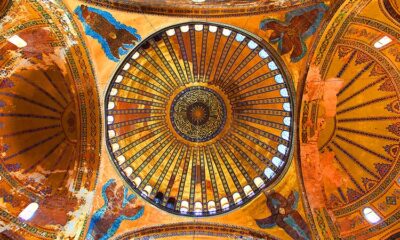 Is Hagia Sophia Merely a Place of Worship?