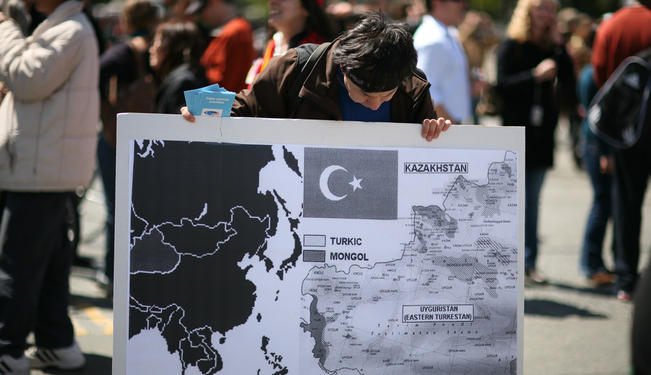 The rise of Islamist forces in the complicated post-revolt transition in the Middle East and North Africa may have an impact on post-Soviet states in Central Asia, that are still struggling with transition to democracy or have yet to experience popular revolts.

Two years ago, the scenes in the Kyrgyz capital of Bishkek resembled those in Cairo’s Tahrir Square in the last 18 months. Mass anti-government protests demanding an end to autocratic rule toppled the country’s ruler despite attempts by security forces to squash them. The protests paved the way for presidential elections contested by a former prime minister under the ancient regime and a host of Islamist and non-Islamist candidates.

The Kyrgyz voters chose their former prime minister, Almazbek Atambayev as Central Asia’s first democratically elected president. Two years later Mohammed Morsi, a leader of the long outlawed Muslim Brotherhood, was elected president of a post-revolt Egypt. Though the results may be different the elections represent two sides of a fundamental issue that both Central Asia and the Middle East and North Africa are grappling with: the rise of religious parties in their politics and public life.

Decades of neglected discontent in the Middle East and North Africa erupted in December 2010 in Tunisia, sparking a wave of popular revolts that has toppled the leaders of Tunisia, Egypt, Libya and Yemen, fomented a civil war in Syria and has other Arab leaders scrambling to avoid being next.

Discontent is similarly simmering in the Central Asia region where half of the population is below the age of 30, and the constituent countries are largely ruled by former Soviet Communist Party bosses who became the presidents of Kazakhstan, Kyrgyzstan, Uzbekistan, Turkmenistan and Tajikistan upon the demise and breakup of the Soviet Union. With countries like Turkmenistan and Uzbekistan ranked among the world’s worst violators of basic freedoms, the region is feeling the impact of the revolts in the Arab world.

However, Central Asia’s sustained suppression of regime critics, including Islamists, and its efforts to severely curtail expressions of religion is bucking the trend towards a greater public role for religion seen in West Asia, such as the success of Prime Minister Recep Tayyip Erdogan’s Justice and Development Party (AKP) in Turkey and the rise of Islamists in the Middle East and North Africa as well as the growing influence of Christian evangelists in the United States.

At a recent inter-faith meeting in Kazakhstan, a Christian participant was quoted by The National newspaper of the United Arab Republic as saying: "The removal of religion from the society also removes the values of the society. The atheist societies of the 20th century failed and were swept away. Faith is a natural desire of a human being. Societies that do not recognise this are not realistic. They will fail as well."

The suppression of Islamist forces in the Central Asian republics of the former Soviet Union serves not only to maintain autocratic rule in most of the newly independent states but also as a mechanism for as long as it lasts to preserve stability in a region that shares a long border with Afghanistan, Pakistan and Iran where the confluence of religion and politics has produced a combustible mix.

Several of the Central Asian republics have experienced cross border attacks by Islamic militants; Uzbekistan is home to the jihadist Islamic Movement of Uzbekistan (IMU), and Tajikistan is still coping with the aftermath of a five-year civil war. A leader of the Islamic Renaissance Party (IRPT), Tajikistan's foremost opposition group, was recently killed and another has disappeared in the rebellious province of Gorno-Badakhstan.

Nonetheless, the fate of autocratic leaders in the Middle East and North Africa holds a cautionary lesson for Central Asian leaders whose raison d’etre is maintaining repressive autocratic powers despite economic mismanagement and widespread corruption. Some, like Uzbekistan’s Islam Karimov see soccer as a way to polish their tarnished image, a tactic that bought deposed Arab leaders time but ultimately failed.

Karimov last year ordered authorities to build new stadiums, open new football schools, and expand training opportunities for players and referees. The Uzbek leader hoped to capitalize on the fact that an Uzbek club won the Asian Football Cup last year as well as an earlier success of the country’s Under-17 youth team. To cement his attempt to steal the show, Karimov persuaded Spanish giant Real Madrid to open a soccer school in Tashkent.

The moves did little to counter discontent, particularly among soccer fans frustrated with corruption in the sport. Clashes among fans have taken the regime by surprise. In Guzar, it took security forces a day to restore order after soccer riots that spilled into the town itself. Similar incidents have erupted in the Tajik capital Dushanbe. Celebrations of the 100th anniversary of Uzbek soccer have repeatedly been postponed because of delays in the completion of Tashkent’s showcase 35,000-seat Bunyodkor stadium amid fears that fans were unlikely to show the necessary enthusiasm.

Kazakhstan, Central Asia’s only middle-income country, last year experienced its first suicide bombing and several lethal attacks on police officers as a result of a crackdown on religion and a deteriorating economy. Discontent in the volatile Fergana Valley recently spilled into the streets of the Uzbek city of Andijan, where hundreds were killed during mass protests in 2005.

In breaking with its Central Asian neighbours, post-revolt Kyrgyzstan, like post-revolt Arab states, has allowed Islamist parties and groups to operate openly in a bid to take the sting out of their bite. The experience of Turkey shows that giving Islamists space has produced what many see as a model for the Middle East and North Africa and perhaps for Central Asia too.

The rise to power through the ballot box of Islamists in Egypt and Tunisia is forcing them to focus on their country’s economic problems and to demonstrate their ability to reach out to secular and non-Muslim groups. While the jury is still out in Egypt and Tunisia, nonetheless, it strengthens the basis for international pressure on Central Asian autocrats to loosen the reins and move towards greater transparency and accountability. If that comes about it might well be the most lasting impact of the Arab revolts on the post-Soviet states of Central Asia.