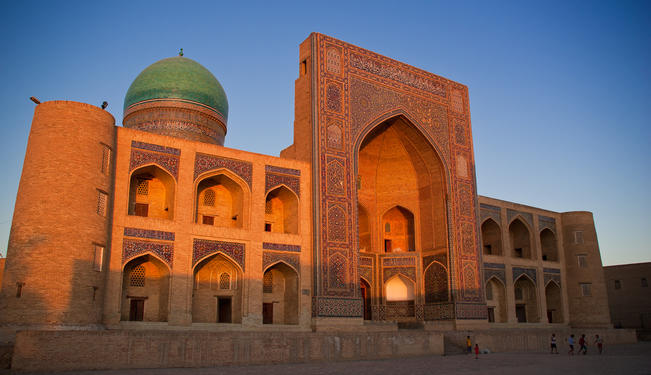 The failure of Central Asian states to engage political Islam within a religious and political framework perpetuates the threat of Islamic extremism. Religious pluralism may offer the antidote.

Islamic society and the state have a long history of active engagement in Central Asia, but the 20th century introduced external agents that disrupted Islam’s place in the civic system. Two disruptive agents include state-imposed secularism, and the simultaneous shift towards pan-Islamic political activism within intra-Islamic dialogue. These phenomena coalesced into a mode of religious governance that disengaged Islam in the state sphere and silenced moderation within the religious sphere. And now, Central Asia collectively faces the challenge of maneuvering religious and political revival within the unholy triangle of governance, security and sustainable economic development.

Central Asia underwent a significant shift in governance and religious activity throughout the 20th century. Soviet imposition of strict secularism created a vacuum of “truth” discussion that facilitated the rise of Islamic extremism, expressed through the medium of political Islam. Additionally, heightened international integration offered access to contemporary Islamic debate fueled by Sayyid Abul A’la Maududi and Sayyid Qutb, which altered the intra-religious dialogue about the purpose of Islam and government.

The breakup of the Soviet Union and the ensuing power stabilization efforts within the region temporarily enabled a revival of Islamic culture. However, the War on Terror created a cover of legitimacy for state crackdowns on Islamic organizations. As a consequence of crackdowns and unchecked intra-Islam developments, political Islam and Islamic extremism evolved into a largely homogenous agent. Current Islamic activism in Central Asia, with the notable exception of the Islamic Renaissance Party of Tajikistan (IRPT), is defined largely by radical organizations such as the Islamic Movement of Uzbekistan (IMU), the international Hizb ut-Tahrir Islamiyya (HT) and Salafi movements.

Recapturing the proactive state-religious dialogue of the 19th and early 20th centuries remains a challenge for governments and Islamic organizations alike. The lack of a religious pluralism framework widens the gap between state and religion, further complicating the state’s security and governance challenges.

The 21st century requires states to be flexible in order to develop while balancing increasingly informed and active populations. However, most Central Asian states continue to regulate the political and religious activism spaces without adapting to technological advances. Uzbekistan, Kazakhstan and Kyrgyzstan maintain strict policies concerning Islamic organizations and activism. The governments boast similar extremism laws that provide broad interpretive powers regarding the activities of religious organizations. While some organizations may legitimately warrant state intervention, regulating the religious sphere forces extremist views out of the public space where dialogue and public opinion can correct against, and minimize the effectiveness of such views.

Tajikistan once represented an exception to the state-religion status quo, but the country’s leadership now appears to be revising its strategy of engaging political Islam through the IRPT. President Emomali Rahmon’s administration recently supported the closing of the Muhammadiya Mosque, a popular mosque run by Haji Akbar Turajonzoda’s family (the former deputy prime minister, and an Islamic activist).

In addition to the mosque closing, the Tajikistani government has pursued a general policy of marginalizing the IRPT specifically, and political Islam in general. In June, the parliament passed a law that restricts domestic access to foreign faith groups in an attempt to reduce foreign influence, especially from the IMU. These developments in Tajikistan, a country once used by academics and policymakers as a model of state-religion engagement in Central Asia, signify a discouraging turn in favor of an outdated secularism that ignores the global wave of populism.

Among leading Islamic organizations in Central Asia, the response to increasing pressures against ‘Islamic extremism’ varies little from past operations. Hizb ut-Tahrir Islamiyya maintains its relatively passive support of violent jihad against Western powers and other non-Islamic governments, using propaganda and networking to influence Central Asian populations, while the IMU continues small-scale attacks throughout Central Asia.

However, as NATO prepares to leave the region, stability in Afghanistan and Pakistan may diminish further. The potential power vacuum offers an opportunity for Central Asian Islamic organizations to expand their radius of influence and operations. The IMU has already been active in Afghanistan, having semi-officially joined forces with al-Qaeda. Moreover, while HT is banned in Pakistan, an active underground network exists as allegations against British Conservative Party Chairwoman Baroness Warsi show. An investigation into Baroness Warsi’s ties to the HT in Pakistan reveals active networking between the underground British HT and Pakistani HT.

The Future of Political Islam in Central Asia

Central Asia’s maintenance of a pre-Cold War governance mentality has done it much harm. Until recently, Central Asian governments manipulated an already apathetic society into rejecting any political or religious activism that was not rooted in state authority. Recently, things have changed. Governance and security have globally become entangled with technology and social media. Furthermore, new political and religious movements are reshaping populations’ perceptions of authority and activism.

The governance hurdle of the 21st century is a state’s ability to balance authority and individual autonomy. This autonomy allows an individual to pursue a political or religious identity. The ability of the state to provide security is no longer defined by its skill in handling international relations alone. Today, states must also navigate populations awakening to new ideas about politics, economics and society. Some new ideas are propagated by radical religious forces and religious pluralism is the best way to counter them and prevent them from taking over the apparatus of the state or exploit its security vulnerabilities.

Religious pluralism is no cure for the disintegrating ties between Central Asian states and regional Islamic organizations. Nonetheless, it does create transparency and tolerance among religions through dialogue that reveals and corrects against extremist ideologies. Extremism thrives on ‘underground’ energy, and strict secularism provides a framework for this. State-sanctioned crackdowns in order to contain extremist ideologies are only catalysts, as increased activity in Pakistan and Afghanistan shows.

State-protected religious pluralism, alternatively, institutionalizes a self-correcting mechanism through freedom of speech and demonstration. It reveals the true faces of extremism and moderation. Should states choose to engage political Islam through religious pluralism, they would reduce the ability of Islamic extremism to manipulate governance, security, and development threats within the region.