Lebanon’s civil war ended 25 years ago, but Beirut is still scarred by traces of the 15 years of violence that engulfed the country.

One look at the old Holiday Inn in Beirut reminds every visitor to the Lebanese capital that this city was a warzone. Large holes from artillery and sniper shells, some of them about 40-years-old, etch this unofficial landmark of Lebanon’s civil war, which ended in 1990.

“A lot of people pass by these buildings every day as if they are something normal, but they are not. They are remnants of the war. They are our wounds, they are the issues that the war left us,” street artist Jad el-Khoury tells me during a meeting in East Beirut’s Gemmayze district.

On November 15, Khoury “attacked” the Holiday Inn. His weapons: spray paint, color and ropes with which to abseil from the top of the remnants of the hotel (all with official permission). Khoury, a young Lebanese man with a background in architecture, transformed part of the façade with his graffiti work. “Highlighting the war traces,” as he explains.

“So the people look at them and are kind of reminded of the war, especially the new generation, which didn’t live through the war, like me.”

“We should know, if we keep going like this, with this racism in us, we might repeat it. In order to prevent this, I am highlighting it,” Khoury says.

This is not the first building he has transformed. Also in November, after long hours of training, he rappelled from a building, spraying his signature characters around the edges of the holes that were caused by shelling during the war. The red characters are hard to miss on the drive between West Beirut and the downtown area.

Talking about the remnants of war in the Lebanese capital, he says, “The government is doing nothing, the owners are doing nothing, so I decided to do something, but without erasing them. Instead, I wanted to highlight them. That’s where the idea of ‘War Peace’ comes from—highlighting the war traces using my signature characters, which I call Potato Nose.”

Khoury says he had wanted to leave Lebanon in the past, out of frustration with “the corruption, the racism, the poverty, the pollution.” During this time, he created a character called Single Man.

“Single Man is about the phase when I needed to leave, so I created this character who was living in his bubble and he doesn’t want anyone from society inside.”

But a meeting with Lebanese architect and artist Nadim Karam changed his outlook, he says.

“I always thought an international architect and artist like him should be living in New York or London, and not here,” Khoury explains. After finding out that Karam actually lived in Lebanon, he went to meet him. His first question: “Why are you here?” The reply: “Here they need us the most and this is where we should be.”

This response had a fundamental impact on the young urban artist’s way of looking at his home country. “My perspective changed and I started to use the traces of war as a source of inspiration,” Khoury says.

But he doesn’t want his art to overpower the traces of war. “If you see the whole thing, the characters are still a minority. The war traces are still the primary thing. The first thing should be the war traces and then the potato nose.”

What’s next? “I still have one more building to attack,” he says with a smile.

*[A version of this article was originally published by The World Weekly.] 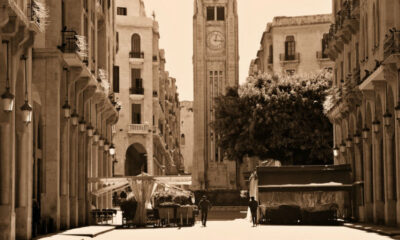 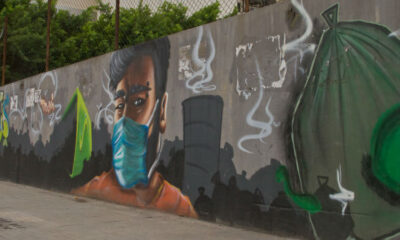 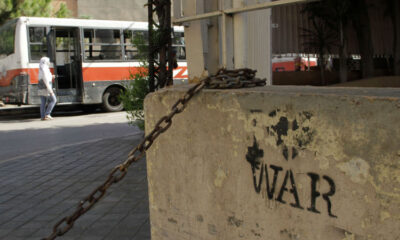