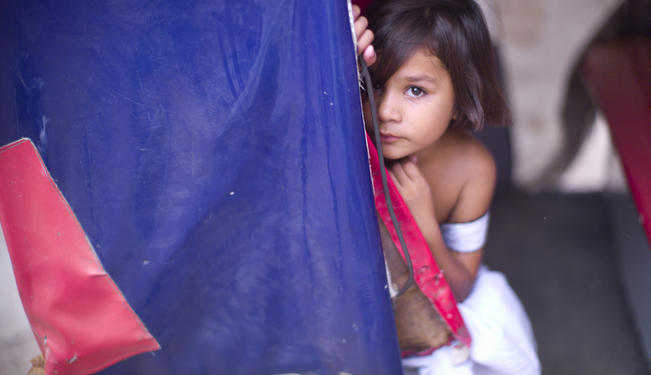 What is the biggest challenge facing Pakistan? This is the first of a two part series.

In a conversation with Fair Observer's Nishtha Chugh, the Director of The Samosa, Anwar Akhtar, discusses the origins of Pakistan Calling: a film project in collaboration with the Royal Society of Arts that shows links between civil and cultural organizations in Pakistan and the UK.

Nishtha Chugh: Nawaz Sharif is the new prime minister of Pakistan. What kind of changes are you expecting to take place, or what will happen in his leadership — he's a changed man, of course — with respect to your initiative?

Anwar Akhtar: I think the most important thing about the recent Pakistani elections is the fact — as has been well-documented — that a democratic transfer of power from one elected government, which was dominated by the Pakistan's People's Party (PPP), to a new government that is now dominated by the Pakistan Muslim League (PML), has not been interrupted by a coup, a judicial intervention, or by state of emergency. It is the first democratic transfer of power. History has taught us that democracy is a process of growing institutions and growing civil society. And so the most positive thing about Nawaz Sharif's election is that it has gone smoothly; it is broadly seen as democratic, open and fair and free, and he has won the mandate.

Now, behind that there are many complexities as Pakistan faces many challenges — but broadly it is positive. And I think there is increasing transparency, there is increasing awareness about the power of the state. And with Imran Khan's intervention in the urban areas, some of the existing ballparks have been broken up because of urbanization, demographic change, young urban voters, and a rising middle-class; and so it is very positive all round.

Akhtar: I think it's a good thing that we have a civilian democracy and there are democratic elections. But, the RSA Pakistan Calling program is not aligned to any political party or any political network. We are completely non-political in a party sense. We work with civil society, welfare, education and development networks across political affiliations.

Chugh: What do you think is the biggest challenge facing your country today?

Akhtar: I am not sure there is one single challenge that is the biggest: there are several. There is a crisis around marginalized people; people are excluded from education; there is poverty; and a rapidly growing urbanizing population that is testing existing welfare networks. It is well-documented that the Edhi Foundation is the closest thing Pakistan has to a welfare state. And I think it is in the region of many hundred hospitals and health centers. Coping with a population of 180 million and relying on the Edhi Foundation is challenging, despite the brilliance of Edhi and the other welfare health networks.

On the other hand, a population of 360 million, which is what we're on course for in two generations, is a crisis for Pakistan unless there is investment in health and education and a rural infrastructure. So, just a growing population is a huge crisis that would threaten many states' futures — and alongside that there is sectarian violence and inter-communal violence, violence against minorities, and violence against women.

Chugh: Can you tell us a little bit about how Pakistan Calling as an effort, and as an initiative, started? When was your "ah-ha moment," when you decided to come up with something like the project?

Akhtar: I think there was no "ah-ha moment." There was a group of British Pakistanis who were getting increasingly frustrated about the failure of engagement with institutions — and how you had all this activity in the British Pakistani community around supporting health, education, the work of Islamic Relief, the people involved in The Citizens Foundation, and right the way through to pensioners that send money to the Edhi Foundation. And yet there was this huge, almost divide, or ceiling, where the British Pakistani community just didn't have a presence in the work of think-tanks and international policy networks. Given the issues and the fact that the diaspora community has understanding and levels of access on some very difficult issues, there was a feeling of a missed opportunity.

Chugh: When was that?

Akhtar: This would have been 2007, 2008, 2009, when the idea of The Samosa first came into being as a web news project. It was a time where lots of British Pakistanis who I knew were volunteering in health, education and welfare, as well as American Pakistanis and Canadian Pakistanis — there was a theme emerging. A lot of them were professionals, and would be seen as very integrated western individuals. But they were working in Pakistan, and their contributions as British, American or Canadian citizens were not being acknowledged while there was an obsession with preachers of hate. This is not the only side of Pakistan; it is a very difficult side.

So, our origins were partly about the need to start raising awareness about the work that is done around health, education and development — and also that Western diaspora communities can bridge trade, economic development, and global networks in the West and developing South Asian communities, and they can do things around working in health and education that maybe other NGOs cannot do.

There was also a genuine anger about minority rights issues. What was happening in Pakistan around the minority communities was awful. People needed to speak up. Partly, one of the reasons The Samosa was set up was to work with the Human Rights Commission of Pakistan and raise issues about the persecution of Hindu communities and Christian communities. And with the British Pakistani community, because many of them have got very deep roots in the villages, the Punjab and Kashmir, their voices would have a bit of weight.

I suppose the game changing moment was when a very conservative, a very established institution like the Royal Society of Arts (RSA), which has huge reach, influence and authority on issues around education, social welfare and citizenship, essentially started working with the British Pakistani community to engage them on international relations, international development, conflict-resolution, and to help give them a voice vis-a-vis Britain’s interest in South Asia. With that, we started doing these films to raise awareness about the issues.

Chugh: So it's not confined to the Pakistani diaspora based in Britain? It is all-inclusive and includes all other diaspora — Canada, America and elsewhere in Europe.

Akhtar: Yes, and a lot of the films have been contributed by American-Pakistanis and other diaspora networks.

Chugh: I have information on The Samosa, but not on Pakistan Calling. How old is this?

Akhtar: Pakistan Calling was set up in April this year. It's only a few months old. Before then, the RSA held some discussions and panel events with The Citizens Foundation, The Samosa, and the Human Rights Commission of Pakistan, and they were very successful. They filled the great hall at the RSA twice, and we did events at City University as well.

Chugh: Can you give me a few examples of the aid agencies involved?

Akhtar: I'll have to check but I think it was International Red Crescent and also I'm not sure who the Pakistani one is. But it was seen as a model of good practice in collaboration between local and small and large. And so we thought that was a nice metaphor for the next stage in Pakistan Calling. The next stage is The Balakot Project. What we wanted to do was this: If you raise awareness of health and education and incredibly powerful role-models in Karachi and Lahore who are doing very strong work, then that can also raise aspirations in Britain and show another side of Pakistan to the country.