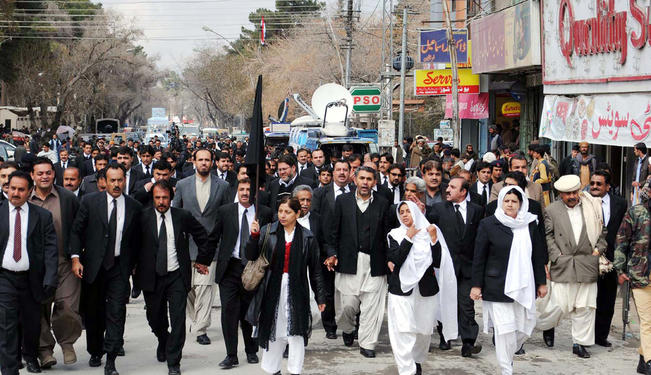 Pakistan’s judiciary has undergone an enormous transformation in its recent history.

The principle of rule of law constitutes the very basic substance of democracy. The rule of law involves the supremacy of the constitution, equality before law, and civil liberties.

Pakistan’s experience with democracy is not a success story. Successive military coups have entrenched the position of the army in the country’s political development. Even during the brief democratic interlude of the 1990s, the military controlled key areas of governance like security and foreign relations. Indeed, the strength of political governments is rooted in popular support, which in turn comes through performance. When this factor is lacking, non-representative institutions find a gap and take control. In Pakistan, the army has tried to justify its perceived guardianship role on many counts. However, military-rule is always a part of the problem rather than its solution. Military rule perpetuates a weak civil society and political opportunism.

In the midst of such a grim scenario, the role of the judiciary has not been solid. In fact, the judiciary’s failure to check extra-constitutional regime changes is a glaring example of a non-consolidated democracy.

The Enactment of the Constitution of Pakistan

In recent years, Pakistan’s judiciary has undergone a rapid metamorphosis. There has been a clear shift towards the independence of the judiciary. The process of judicial transformation commenced in 1973 with the enactment of the Constitution of Pakistan. The primary role of any judiciary is to safeguard the constitution; hence the judiciary in Pakistan was conferred with a definite mandate after a constitution came into existence.

However, a short while after its promulgation, several amendments were passed which gave the executive superiority over the judiciary. The constitution acted as a preserve against military interference in the political realm of Pakistan. In spite of this, martial law was imposed in 1977 by General Muhammad Zia-ul-Haq. Soon, an overwhelmingly powerful executive brought the tinge of autocracy, and the balance maintained by the separation of powers under the constitution vanished almost entirely.

This take-over and the subsequent imposition of martial law was challenged in the Supreme Court. In the case — Begum Nusrat Bhutto vs. Chief of the Army Staff and ors — the petitioner, Bhutto, argued that the detention of leaders from the Pakistan People's Party (PPP), including Zulfikar Ali Bhutto, was unconstitutional. This petitioner was dismissed under the “doctrine of state necessity,” however. The flawed adjudication of the Supreme Court derailed democracy for more than a decade.

The Birth of Constitutionalism

In October 1999, following General Pervez Musharraf’s coup to assume power in Pakistan, a similar case was filed — Zafar Ali Shah and ors vs. General Pervez Musharraf, chief executive of Pakistan. In this case, the “doctrine of state necessity” was invoked again to justify military rule. However, restrictions were imposed and general elections were ordered within three years.

Further, the salient features of the constitution could not be amended. This was a significant improvement in the attitude of the judiciary. The Supreme Court which is often charged with allegations of corruption and incompetence, instead of meekly upholding the coup, set a deadline for Musharraf as well as limits to his exercise of executive power.

During his period in office, the judiciary underwent the most drastic transformation ever, ushering in the “lawyers’ movement”. In 2005, Musharraf appointed Iftikhar Muhammad Chaudhry as chief justice of the Supreme Court. Chaudhry quickly implemented several changes at the Court. He began a concerted effort to improve the Court’s efficiency and reduce backlog. From 2005-2007, Chaudhry greatly expanded the amount of “public interest litigations” before the Court. He took suo moto actions, in order to check the abuse of power and misuse of authority.

In April 2006, the Supreme Court ordered the annulment of the sale of Pakistan Steel Mills as it was arbitrarily carried out. This case opened a can of worms as it threw light upon several bureaucratic discrepancies under the Musharraf administration. During 2006, the Supreme Court required intelligence personnel to appear before it, so as to account for missing persons that the government had allegedly detained in connection with the “War on Terror.” Frustrated at his inability to control court proceedings, Musharraf summoned the chief justice to pressure him to resign over allegations of misconduct. Chaudhry refused and Musharraf proceeded to suspend him, and place him under house arrest.

The public reaction to the event was decidedly negative. Chaudhry soon became the symbol of the common man’s protest against the political elite. The assertion for judicial independence was so strong that lawyers went on unending strikes and judges refused to take an oath before Musharraf. The involvement of Pakistanis from all spheres of life signified an implicit understanding of the central function of an independent judiciary. The chief justice was the closest to a personal embodiment of “the law” that one could associate with. Thus, the act of his dismissal was seen as the subversion of law by the dictator.

Two years later, with Musharraf in exile and a civilian government in power, nationwide protests returned Chaudhry to his position atop the nation’s highest court.

History proved that a military dictator could not do whatever he pleased. An outspoken chief justice, a rebellious cohort of judges, thousands of lawyer-activists, dozens of resurgent civil society groups, a sympathetic media, opportunistic political parties, and hundreds of thousands of ordinary Pakistani protesters, all together forced a version of judicial supremacy against the dictator.

The sights and sounds of the lawyers’ movement represent a unique form of social action in the history of Pakistan. The movement provided evidence that judicial power was indeed a popular currency and possessed an ability to open up new forms of political engagement and new arenas of political power.

The 18th Amendment Act: A Watershed in History

The role of the judiciary has been primal in the evolvement of democracy in Pakistan. In 2010, the National Assembly of Pakistan passed a notable amendment. The 18th Amendment made several changes in the constitution and removed the distortions caused by two military rulers: Zia-ul-Haq and Musharraf. The 18th Amendment marked a triumph of democratic forces. The Amendment shifted the balance of power in favor of the prime minister and parliament and expanded the scope of provincial autonomy. The power of the president over parliament and to make changes in the constitution was severely constrained.

In the end, the most important effect of the judicial transformation may not be its immediate impact on the composition of the judicial and executive branches of government, but rather the changes it has engendered in the collective identity of Pakistani judges, lawyers, journalists, students, urban professionals and politicians, and its impact on political awareness of ordinary Pakistanis.

Speaking about the impact of the movement, renowned social activist Aitzaz Ahsan said:

“The lawyers’ movement is to be judged on the qualitative changes in the mindset of Pakistanis. I venture to think that after the civic debate it has caused across the board, the common man now understands what the rule of law means… However, the broader aspect of the movement is the dream that has been placed in the eyes of the people in the form of a transformed state.”