Following the poisoning of the Russian opposition politician Alexei Navalny with a nerve agent from the Novichok group, the possibility of using Nord Stream 2 to put pressure on Russia has been widely discussed. Specifically, there are calls to abandon the project, to impose a moratorium or to block gas deliveries through the pipelines if the Kremlin refuses to assist investigations.

The Nord Stream 2 Baltic gas pipeline is highly symbolic, embodying the willingness of Germany and other European partners to cooperate with Russia. Five European energy companies hold stakes in the project, which is led by Gazprom. It began in 2015 — one year after Moscow’s annexation of Crimea — and has been the target of unrelenting criticism ever since, initially concentrating on Moscow’s declared goal of bypassing Ukraine.

The German government recognizes the project’s economic benefits for consumers and the gas market and has backed it within the existing legal framework under the paradigm of keeping politics out of business. In order to cushion Ukraine’s losses, Berlin also backed a Russian-Ukrainian agreement guaranteeing Kyiv gas transit revenues for another five years. To keep its options for completing the pipeline open, Berlin blocked attempts by Brussels to assert control. That is now both a burden and an opportunity.

Recent developments have been largely driven by the US, which has successively stepped up pressure to abandon the project. The American Protecting Europe’s Energy Security Act has succeeded in stopping pipelaying since the end of 2019, and Congress has taken steps to make it impossible to resume the work. The US administration has also altered the guidance of the Countering America’s Adversaries Through Sanctions Act, threatening to penalize any entity or individual involved in construction since July 15, 2020.

If construction is to resume, Berlin will have to act more proactively to counter the impact of Washington’s sanctions. On the one hand, it will be difficult to politically justify actively supporting the construction of Nord Stream 2, while on the other hand, Berlin must continue to reject and criticize such secondary sanctions as a matter of principle.

Stopping Nord Stream 2 would be seismic. But what happens when the dust has settled? The government will have to make difficult choices. The following four aspects need to be considered.

First, the immediate effect on the energy supply would be marginal. The project is neither — as so often asserted — a danger to European energy security, nor is it essential. Existing pipelines through Ukraine retain an annual capacity estimated at 100 to 120 billion cubic meters, with the Yamal-Europe pipeline through Poland and Belarus adding 33 billion cubic meters and Nord Stream 1 another 55 billion. There are also pipelines to Turkey and Finland. Together, these would easily cope with the peak volume of more than 190 billion cubic meters, which Gazprom supplied to Europe in 2017-18.

That means, conversely, that stopping Nord Stream 2 would not in the slightest reduce the volume of gas purchased from Gazprom. But this direct, efficient modern pipeline would reduce the risks of transit disruption and technical failure. Without it, Nord Stream 1 and its connecting pipelines become crucial.

Second, indirect effects on the economy and energy supply are hard to estimate. Sunk costs in the Baltic would hurt Gazprom but would also be costly for European companies. Aside from the commercial repercussions, it should be remembered that Nord Stream 2 would improve the resilience of the European gas supply and that an expanded gas supply would benefit industry and consumers.

The gas reserves on the Siberian Yamal Peninsula have already been developed, while the global LNG market can quickly tighten again. The “Energiewende” (green energy transition) will naturally reduce demand for natural gas, but the speed with which that occurs will also depend on an expansion of the power grid and a rapid, consistent transformation in heating and industry. Here, there is still much work to be done.

Third, abandoning an economic infrastructure project for political reasons would represent a paradigm shift for Berlin. Major infrastructure projects undeniably have (geo)political implications, and other states do link business and politics in pursuit of national interests, too. That new geo-economic reality represents a challenge for Germany’s strategic sovereignty, also in the energy sphere.

But that is precisely the point: Other states act in pursuit of their interests. For all the political fireworks, the project is a strategic asset for German commerce and industry. Germany and its EU partners would only be harming themselves if they stopped construction just to send a normative message to the Kremlin. Putin would probably interpret this as Germany simply caving to US pressure, further weakening the political signal

Fourth, the normative justification raises questions: Is the situation really qualitatively new? Would earlier events not actually have offered more solid grounds? Here, we are confronted with an almost insoluble dilemma of the fossil-based energy system: We purchase oil and gas from authoritarian regimes every day. In that regard, the Energiewende has a geopolitical dividend.

But make no mistake: Even a successful energy transition will rely on energy imports from these countries, and on the ability to reliably realize major infrastructure projects. The days of the special strategic energy partnership with Russia are over, but a functioning modus vivendi for trade and exchange with this big and resource-abundant neighbor remains essential. From that perspective, a moratorium would gain time for all involved. But the conditions for resumption would have to be clearly communicated, agreed with EU partners and implementable for Russia. 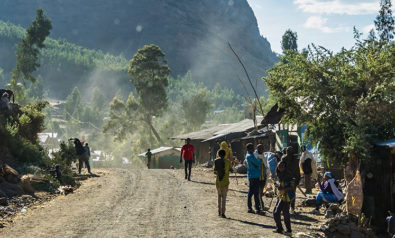 Is Ethiopia on the Brink of Civil War?