Watching French President Emmanuel Macron’s address to the nation on March 12, I couldn’t avoid admiring the skill with which he deployed two supremely engineered strategic themes. After drawing attention to the importance of a concerted European response to the pandemic, he insisted that the French government would not only bypass the interests of the free market to focus on addressing the needs of the people, but he also suggested we may be on the cusp of a radical shift in the nation’s history away from the neoliberal recipes of the recent past.

The emphasis on European solidarity came naturally to Macron. It’s the one area in which the bitterly contested president has shown some leadership skill as he has consistently sought to reinforce France’s position in Europe, both in relation to Brexit and the decline of German Chancellor Angela Merkel’s dominant role on the continent.

Yet Macron surprised even his most acerbic critics. Not only did he describe the measures of his comprehensive plan to safeguard the integrity of the nation and the well-being of its people from the existential threat of an undeniably growing coronavirus pandemic, but he also insisted that the collective needs of the people and the government’s solidarity with them have absolute priority over the desires of the elite.

Macron went much further, invoking a “rupture” with the “failed” values of the free market and proclaiming that “it is now the time for a sacred union in which all together we follow the same path.”

An idea focused on recognizing a common purpose that brings an entire population together in the face of a threat from outside forces, a welcome and useful tool for contested political leaders who are pleased to invoke the principle as a means of neutralizing opposition to their own politics

Early commentators don’t seem to have noticed the extent to which everything Macron proposed in his address contrasts radically with the positions and rhetoric of US President Donald Trump. More broadly, by specifically lauding the welfare state, President Macron challenges the approach of American politicians to the pandemic, with the notable exception of Vermont Senator Bernie Sanders.

Whereas Trump minimizes the threat of the coronavirus pandemic and congratulates himself on doing just enough to keep things under control — while insisting, against all evidence, that things already are under control — Macron and Sanders both invoke the gravity of a situation they deem comparable to a state of war. Sanders, who is running in the Democratic presidential primaries, insisted: “The crisis we face from the coronavirus is on a scale of a major war, and we must act accordingly.”

Macron, in words that would not sound foreign coming from Sanders, unequivocally proclaimed that “free health care, without any restricting condition of income, path to treatment or profession and our welfare state [état-providence] are not costs or charges but precious goods, indispensable assets when crises occur.” He added: What this pandemic reveals is that there are goods and services that must be placed outside the laws of the market. To delegate our food, our protection, our standard of living to others is madness.”

Although he has the reputation in France of a neoliberal ideologue, Macron not only echoed Sanders, a self-described democratic socialist, but he clearly felt the duty to respond to Trump’s 30-day travel ban that had been announced the same day concerning flights from Europe. Macron appeared intent on profiting directly from the weakened position of Trump, whose reaction to the pandemic reveals him to be an ignorant and irresolute executive utterly lacking in empathy for real people. In his speech, Macron promised to call Trump the following day with the idea of forcing the US president to coordinate a response at the G7 level, something that Trump, clinging to his “America First” policy, would be unlikely to do.

Macron may also have noticed that Trump has used the crisis not to unify his nation, but as a means of contrasting the Democratic and Republican interpretations of the global pandemic. Trump has encouraged the idea that the Democrats have fabricated another “hoax” to follow Russiagate and the failed attempt at destitution through impeachment. President Macron drew a sharp contrast between their two approaches to the pandemic: “It isn’t division that will allow us to respond to a global crisis,” he said.

In his most spectacular divergence from President Trump, whose first instinct was to consult Wall Street barons to ensure the liquidity that could prevent a recession, Macron directly eschews the idea of trusting the markets. He announced that he doesn’t “know what the financial markets will do in the coming days,” almost as if to say that he doesn’t care. Only the people count, not the markets. Instead, Macron promised that Europe will undertake whatever is necessary to protect its economy and that France will spare no cost in meeting the needs of its population.

Here are some of the key phrases that Macron used to highlight his commitment and his train of thought: “act as one” (faire bloc), “individual and collective discipline,” “unity,” “avoid the retreat to nationalism or individualism,” “unite our forces,” “coordinate our forces,” “cooperate,” “European coordination,” “invent new solidarities,” “national mobilization of solidarity between generations,” “act as a nation” (faire nation), “this period of new solidarities” and “our generous soul that allowed us to confront the toughest trials.”

But his speech took on a more radical tone when he invited the nation to “question the model of development that our world has adopted in recent decades, which has been exposed to the light of day the flaws that this pandemic has revealed.” This could have been spoken by Thomas Piketty, the best-selling French economist specialized in the critique of a neoliberal order that has generated ever-increasing inequality.

This feels like a signal that Macron — whose electoral strategy over the past year has taken a turn to the right by embracing anti-Muslim xenophobia — sees an opportunity to harness a different populist trend, one that emphasizes solidarity rather than exclusion. It could be an effective electoral strategy for a centrist president who appeared lost in the undefined and undefinable political center that emerged as his pathway to victory in 2017 when the establishment parties, left and right, miraculously imploded.

Many people who saw Macron as an arrogant elitist may now take a different view of a president who affirms that the pandemic has exposed the Western-dominated economy as incapable of addressing any of the increasingly intractable problems that now face humanity, which include the growing reaction against structural inequality, the climate crisis and pandemics.

As Bob Dylan once said, this time with possibly more impact than in the 1960s, “the times they are a-changin’.” At the same moment as Macron’s address, Neil Irwin, senior economics correspondent at The New York Times, wondered about “signs — not definitive, but worrying — that something is breaking down in the workings of the financial system, even if it’s not totally clear what that is just yet.”

With Joe Biden as the frontrunner in the Democratic primaries, it may well be too late for Sanders to have an impact on the US presidency, yet his campaign seems to be producing fruit at the highest levels in France.

Emmanuel Macron clearly understood that history could provide him with the means of saving his contested presidency. In the context of his speech seeking to motivate the nation, the idea of the sacred union sounded like a convenient rhetorical device, an appeal to the sense of solidarity of the French people. Most people may be unaware of it, but the “union sacrée” was a real historical movement of political unity launched by French President Raymond Poincaré at the start of the First World War. It permitted the nation to overcome the divisions that had troubled French politics in the leadup to the conflict.

Perhaps echoing Bernie Sanders, Macron cleverly appealed to the sense of threat that people associate with war. On several occasions in his speech, he evoked, without naming them, the memory of past wars, speaking of the “toughest trials” the French had faced in former times. Unlike the recent wars and military operations in which France, along with the neoliberal order, has participated — notably in Afghanistan, Libya and in other regions of Africa — the French remember the two world wars of the 20th century as moments of history in which their culture and national integrity were threatened by evil external forces. That is a sentiment much more powerful than the artificially induced motivation for using superior technology to attack distant countries because they may be breeding individuals capable of an occasional terrorist attack inside France.

The great advantage of the coronavirus pandemic is that there is no evil party to blame, which means it cannot be the object of political controversy. No one is siding with the virus. More significantly, for the first time since the Vietnam War, Western countries feel threatened not by abstract threats that occasionally produce spectacular, very real criminal incidents that the media can make no sense of (they routinely call terrorist acts and mass shootings “senseless”), but by something directly threatening everyone’s livelihood. Our civilization has been waiting to see a sign not just that the system raised some hypersensitive and violent people’s hackles — who in George W. Bush’s words “hate us for our freedoms” — but that it was deeply flawed.

Just as Sanders still appears to be the only prominent American politician with a message about how structurally flawed the system itself is — something he has been preaching for the past 30 years — Macron appears to be the first leader of a Western nation to make that simple observation.

America Called Its Government, But No One Answered

CNN and the Art of Overstatement 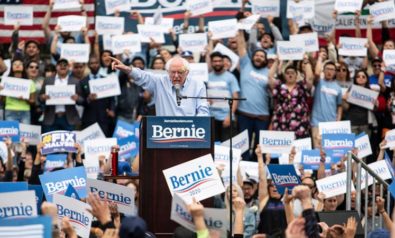