A high school teacher in California has earned her half-hour of fame by stepping up to expose an act of flagrant hypocrisy that took place in broad daylight during US President Joe Biden’s inauguration. Ingrid Seyer-Ochi was the first to notice the duplicity. After boldly raising the awareness of the students in her class, she captured the attention of the surrounding community when the San Francisco Chronicle published her op-ed.

Seyer-Ochi exposed what the rest of the population failed to notice, even though the event had been broadcast to the nation. Her acuity alone penetrated through the veneer to identify the shameful act perpetrated by a well-known politician. The foul deed occurred on Capitol Hill a mere two weeks after a rabid mob, whipped into a frenzy by Donald Trump, notoriously occupied the Capitol and threatened lawmakers’ lives to protest a stolen election.

What was the shameless deception her probing eyes had unveiled? Who was the guilty party? And how did this person get away with such a vile act?

Unchanged or Unchained: What’s in Store for the JCPOA?

The answer to those questions surprised most of the readers of her op-ed. Seyer-Ochi exposed a dangerous adept of the now well-known sin of privilege, not just of white but also male privilege. The guilty party was none other than Senator Bernie Sanders. The former presidential primary candidate, according to the teacher’s reading, had set up the scene to dupe the masses, gullible enough to fall for his brazen attempt to cultivate an image of the folksy elder of the traditional American family.

By covering his hands with the archaic symbol of hand-knitted woolen mittens in a homage to traditional craftsmanship (if not craftswomanship or perhaps craftspersonship), Sanders’ attire signified his identification with the dominant white, wealthy elite that has consistently stoked endemic racism for the past 400 years. Sanders was also guilty of dressing too casually and failing to respect the solemnity of the historical enthronement of the first female vice-president of black and South Asian descent.

Yahoo editor David Knowles described this significant teaching moment in these terms: “Seyer-Ochi’s objection was to the “privilege, white privilege, male privilege and class privilege.” The teacher “addressed the topic with her students, who she said were also upset by what they saw as the implicit message being delivered by Sanders’s choice of outerwear.”

The new woke culture in the US, specializes in the art of canceling people who fail to live up to its real or quite as often imaginary standards. It relies on the ability of its practitioners to detect “implicit messages.” These woke academics believe (utterly mistakenly) that they are applying the insights of continental philosophers like Michel Foucault, or what is called “French Theory.” But woke theorists owe more to the great American puritanical tradition that, since the 17th century, has tasked its adepts with the office of exposing the moral failings of other members of the community.

One of the reasons Foucault and other French thinkers would never have approved of this application of theory is that the practice of délation (denunciation to the authorities) during the Nazi occupation of France in the Second World War is to this day vilified as one of the most heinous acts people can engage in. It was a behavior encouraged by the Nazi-controlled Vichy regime that encouraged good Frenchmen to denounce Jews and members of the Résistance.

But beyond that, Foucault simply saw no interest in condemning individuals or ostracizing specific behaviors. His intellectual art consisted of teasing out relationships between different sets of ideas and cultural practices in particular societies and relating them to the institutions that constitute their power structure. Foucault described what amount to symbiotic relationships. To some extent, he admired their coherence, even when they manifested themselves in ways that were clearly at odds with his own personal values. Foucault, the radical, gay, atheistic questioner of Western institutions, for example, declared his deep sympathy for Ruhollah Khomeini’s revolution in Iran.

What is now commonly referred to as wokeness or even “wokeism” is a recent trend of academic behavior. It traditionally pledges allegiance to French philosophers such as Michel Foucault and Jacques Derrida, but it unconsciously applies an approach opposite to theirs. Instead of teasing out subtle relationships, in the quest to understand how complex elements coexist and support one another within a society at a certain moment of its history, the wokeist methodology focuses on unearthing anecdotal evidence of isolated acts serving to expose what they deem to be a suspect power relationship. That is precisely what Ingrid Seyer-Ochi has done to impress her students and get an op-ed published in the San Francisco Chronicle.

Having absorbed the lessons of structuralism (Ferdinand de Saussure, Claude Lévy-Strauss), Foucault explored what he called “L’archéologie du savoir” (the archeology of knowledge), an approach that seeks to discover how cultures are constructed and the play of forces that hold them together. It seeks out phenomena that explain historical continuity and discontinuity. In the process, it may reveal sources of injustice, but its aim is to layer knowledge and understanding rather than exercise moral judgment.

This divergence of approach tells us something about how intellectual tools produced by one culture — in this case, French intellectuals — may be distorted by a different culture (US academics) that borrows them for a totally different purpose. In recent decades, woke analysts and activists have neglected the job of understanding complexity and increasingly focused on rooting out acts that they can demonize as instances of “cultural appropriation.” Woke critics take particular pleasure in playing the role of inquisitors whose powers of observation and careful detective work allow them to accuse an individual or a group of insensitively using for illicit purposes cultural attributes considered the inalienable property of another group of people. One typical outcome of this vital research is the engaging and deeply instructive practice of critiquing celebrities’ choice of Halloween costumes.

If they had been infected by the same obsession with the injustice of cultural appropriation, the French theorists of the 20th century might have ended up accusing their woke followers in the English-speaking academic world precisely of that sin. They might equally have pointed out that the very idea of cultural appropriation can only exist in societies in which the notion of private property as the foundation of social life is considered axiomatic. Anthropologists and cultural historians have long understood that the elevation of private property to the status of a fundamental human right is a modern Western invention. It belongs to a specific time and place in human history.

This phenomenon helps to illustrate a fundamental difference between the cultures of Europe and North America. When Sigmund Freud and Carl Jung traveled to New York in 1909 to introduce psychoanalysis to Americans, Freud remarked to Jung, “They don’t realize we’re bringing them the plague.”

But it was Freud who failed to realize that the Americans, always ready to exploit someone else’s asset, found a highly productive use for Freud’s plague. Instead of undermining what Freud deemed the uncultivated superficiality of US culture, the Viennese doctor’s intellectual heritage led to the consolidation and accelerated development of the consumer society. Freud’s nephew, Edward Bernays, played an important role in that operation. Instead of showing concern about the destructive impulses of their id, Americans ended up employing Freud’s insights productively, by harnessing the dark energy of the unconscious for profit. Freud’s plague produced both Madison Avenue and the atomic bomb.

Freud saw his mission as one of unveiling the disturbing truth about how our minds work: how the unconscious betrays our conscious intentions. Appropriated by Americans, Freud’s doctrines were used not to illuminate people’s understanding of how their minds work, but to orientate them toward types of behavior useful to the propertied elite and the barons of industry. The age of propaganda was already underway. Propaganda became the foundation of the hyperreality in which people have now accepted to be enclosed.

Postscript: A practitioner of theory should have noticed a likely correlation between Seyer-Ochi’s attack on Bernie Sanders and the establishment Democrats’ permanent campaign to brand the senator a male supremacist because he dared to run against Hillary Clinton in 2016. 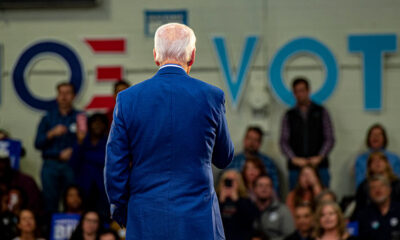 What Will Americans Endure in This Presidential Race?