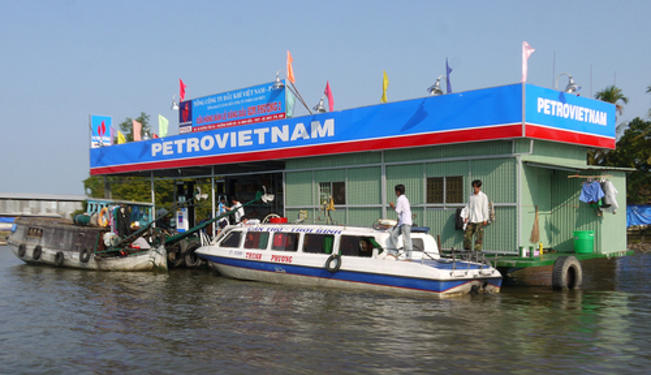 Vietnam’s burgeoning energy industry is helping to bolster its claim to disputed parts of the South China Sea, by getting foreign companies involved in its offshore exploration and production (E&P). Will this approach invite possible reprisals by China or other claimant states?

Vietnam has made great strides in its energy industry since it opened up this sector to foreign investment in 1987. With the Hanoi government playing a leading role, Vietnam has gone beyond partnering the former USSR to engaging in joint cooperation with countries around the world.

For a country wracked by decades of conflict, Vietnam’s achievements in its energy industry can be considered remarkable. Besides joint cooperation, PetroVietnam now offers production sharing and business cooperation to foreign investors, something unthinkable for a socialist economy to undertake in the past. The company has also conducted seismic research and drilling in the country’s continental shelf yielding discoveries that, in turn, attracted more foreign capital, technology and expertise.

At present, aside from 76 petroleum contracts at home, PetroVietnam is also engaged in 23 energy contracts the world over. These range from neighboring ASEAN countries like Cambodia, Laos, Indonesia, Malaysia, and Myanmar, to Madagascar in east Africa and Venezuela in South America. Indeed, if it continues at such a pace, the company can become a formidable global player like its Chinese counterparts, and propel itself to centre stage as a major oil exporter.

While its growing economy consumes ever-greater amounts of energy, Vietnam is also exporting surplus oil to the international market. It uses a joint venture (JV) strategy to attract investors to its energy sector. This strategy not only to welcomes capital and technology for expensive and challenging endeavours such as offshore exploration and production (E&P), it also permits the country to mitigate political or security risks arising from upstream activities. This is especially so in the contested South China Sea where six countries have competing territorial and maritime claims. China and Vietnam, in particular, have long been at odds over marine and hydrocarbon resources in the area, with both countries putting the same waters in their respective service contract system offered to foreign energy players.

Vietnam’s decision to partner with the state-owned energy companies of Russia and, recently, India is not only economic in nature, but also political, as it gives the country the backing of bigger regional powers in exploitingthe resources within its maritime claim. GazpromViet and Vietsovpetro are two JVs that state-owned PetroVietnam undertook with its Russian counterparts, Gazprom and Zarubezhnef respectively. This allowed Vietnam to conduct E&P in both Vietnam and Russia. Hanoi benefited much from the long industry experience and technological know-how of the Russian partners.

Vietnam also entered into a JV with Nippon Oil Corp, thus establishing the Japan Vietnam Petroleum Company (JVPC). But on top of the investments, knowledge, and technology transfer, Hanoi also made it difficult for other SCS claimants, notably Beijing, to disrupt or interfere with these joint ventures, save for some possible diplomatic protests and official press releases against them. The Chinese leadership knows fully well that any action taken against these joint ventures will impact not only on Vietnam, but also on its concerned JV partners such as Russia and India — China’s BRICS partners and regional powers in their own right.

To avoid being seen as provoking China by partnering only with the latter’s rivals, Vietnam also diversified its partners to include Korean, Canadian, American, British, and Australian players. In fact, the country even partnered with Malaysia, a co-claimant in the South China Sea, to conduct oil and gas exploration in their shared maritime zone. The Lam Son Joint Operating Company is a 50-50 JV between PetroVietnam and Malaysian state-owned giant Petronas. Vietnam and Malaysia jointly submitted their continental shelf claims to the UN in 2009 and this could signal the strengthening of the energy cooperation between the two ASEAN neighbours. Hanoi also cultivated energy partnerships with other neighbours, Thai PTT PCL and Indonesian state-owned Pertamina.

The participation of foreign state-owned enterprises in the country’s offshore upstream activities reinforces Vietnam’s sovereign claim in the South China Sea. The joint ventures spread not only the financial and economic risk, but also political risk. It makes it difficult for China or another claimant country to prevent or disrupt these energy exploration activities, as they know that doing so will not only be protested by Hanoi, but may also irk Vietnam’s partners. India’s deployment of naval ships in the South China Sea off the coast of Vietnam can be seen as possible insurance against potential harassment of the Indian company – Oil and Natural Gas Corporation Videsh Ltd.’s (OVL) – platforms by Chinese naval or coast guard ships. This helps Vietnam guard its own Exclusive Economic Zone (EEZ).

Advances in deep sea drilling technology enable Vietnam as well as other coastal and archipelagic states to conduct exploration farther and deeper into the sea. But this would also mean widening the chances of conflict over overlapping maritime claims.

While no effective resolution of the South China Sea dispute is yet in sight, claimant countries will continue to engage in wooing foreign investors to support their maritime stakes with their investments. However, while Vietnam’s strategy may be working to its advantage now, once other claimant states fully adopt the same, a web of competing energy blocks will extend over the South China Sea. That would likely create confusion and heighten tension in the area, which may eventually drive away investors wary of costly political risks and uncertainties.

The author, an MA Asian Studies candidate at the Asian Centre, University of the Philippines, is currently a Researcher with Forging a New Philippine Foreign Policy.