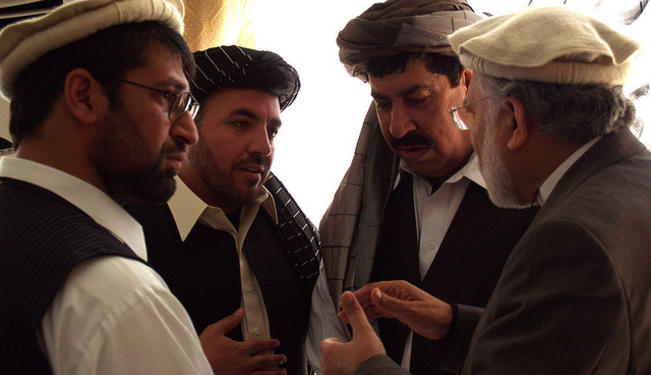 Since 2002, a large amount of U.S. funds flowing into Afghanistan has been diverted to the Taliban by local strongmen, resulting in a continued presence of the militia. The challenge post-2014 will be to reverse the West’s top-down strategy, creating a grassroots-driven incentive for peace and development.

“In Tora Bora a top CIA officer landed with several boxes of Oreo. CIA was paying warlords. Each box contained about a million US dollar bills,” tweeted Bilal Sarwary, a leading Afghan journalist, more than a year ago.

A bit like that tweet, the subversive is the ordinary in Afghanistan. In GDP terms, the country has grown most prosperous during the bloodiest decade in its recent history – its per capita GDP has nearly doubled from $537 in 2002 to $1,030 currently. War has come with super profits for a few in the country, while most ordinary Afghans have been pushed further into poverty and violence.

As the West pulls out by next year, its “top-down” strategy of funding will leave in power a corrupt, privileged class of Afghans – warlords, contracted businessmen and politicians who have made money from continuing the war – an unsophisticated but powerful version of America’s own military-industrial complex. The challenge for countries like India which will have to pick up the pieces of war, will be to reverse the financial incentive structures created by the West.

Through different routes, Western money has found its way into the hands of the Taliban and other extremist forces, creating a vicious cycle of violence that has left the country devastated. According to a 2012 UN report, anywhere between 10% to 20% of the Taliban’s $400 million revenue that year came from contracts funded by the United States and other donors. The report said this usually involved the Taliban agreeing protection money with the contractor or demanding a cut.

America’s “buying out” of provincial strongmen started in 2002 soon after the Taliban were defeated. Warlords like former Kandahar Governor Gul Agha Sherzai and Hazrat Ali, commander in the eastern province of Nangarhar, who helped the West defeat the Taliban, were given arms and communication equipment by American and British intelligence. They were also allowed to build private militias which provided security cover for Western troops as they moved between provinces.

As the war dragged on, the recipients for Western pay-offs changed, but the strategy remained the same. President Hamid Karzai’s brother Ahmed Wali, who became chief of the Kandahar Provincial Council in 2005, was perhaps the most high-profile strongman on the CIA payroll before his assassination in 2011. Others included Col. Matiullah Khan in Uruzgan, Gen. Nazri Mahmed in Badakhshan and Hamid Wardak, son of Defence Minister Rahim Wardak.

The money flow from the West to these men with their private armies, alienated much of the Afghan population. A bulk of the money went into provinces which NATO has struggled to control, where the Taliban still held sway over swathes of land. In 2010, for example, the United States disbursed nearly $276 million in Commander’s Emergency Response Program (CERP) funding in Kandahar, out of a budget of $619 million for the entire country. These “commanders” were needed and fed by the Western intelligence agencies only because of the fear of a Taliban return – so the Western money flow gave them an incentive to ensure that the Taliban survived. They did so by diverting part of their funds to the Taliban and often by giving them logistical support.

The other major source of Taliban funding has been the poppy trade. The Karzai government has largely overlooked this as it has failed to deliver a profitable alternative livelihood to the roughly 3 million Afghans dependent on the narcotics business. Between 2004 and 2007, Afghanistan produced more opium each year than in any year of Taliban rule, according to the UN Office on Drugs and Crime (UNODC). It estimates that as late as 2009, the potential export value of opiates was $2.8 billion which was halved to $1.4 billion in 2010 because of a bad crop and some drug reduction efforts. Much of the production was in the Taliban strongholds of Kandahar and Helmand.

States the UNODC World Drug Report 2011, “… opium poppy farmers, drug traffickers and heroin lab owners paid the group (Taliban) up to 10 percent of the value of their opiate shipments as ‘tax’ or protection fees. In 2009, the Taliban’s total income from the opiate trade was likely around $155 million. However, Afghan opium farmers likely earned $440 million and Afghan drug traffickers almost $2.2 billion.”

The Afghan Interior Ministry estimates that around 35,000 Taliban extremists still remain in the country. They see the retreat of the West as a victory – but at the same time they will be robbed of their main enemy and rallying cry, the foreigner on Afghan soil. And they will be deprived of the international funding that flowed to them through the Afghan strongmen. The Afghan army outnumbers the estimated Taliban by six times, but for a country as much in strife as Afghanistan, they are still too few and institutionally weak. On the development front, the focus till now has been on providing services through central ministries to remote rural communities – which do not want or trust a central government presence. The $16 billion in aid promised to Afghanistan beyond 2014 at last year’s Tokyo conference, is at risk of being squandered through corruption and mismanagement.

The challenge post-2014 will be to reverse the West’s top-down strategy, creating a grassroots-driven incentive for peace and development that reaches the ordinary Afghan in the provinces. India will be among the countries that will lead this effort, and we will do well to avoid Western mistakes, and build on some green shoots of development that can be seen. For instance, 8 million Afghan students are in school today, compared with just 900,000 in 2002. More than 20 million people have access to mobile phones – that is almost two-thirds of the country. Only 18% of Afghans have reliable electricity – but that is three times more people than a decade ago. So all is not lost.

India in many ways has been an ideal development partner for Afghanistan. Much of its $2 billion has gone into building physical infrastructure – in power, telecom, roads, schools and hospitals that all Afghans can use. It must encourage other donors to follow its model of aid in Afghanistan and step up its own efforts to secure the country.