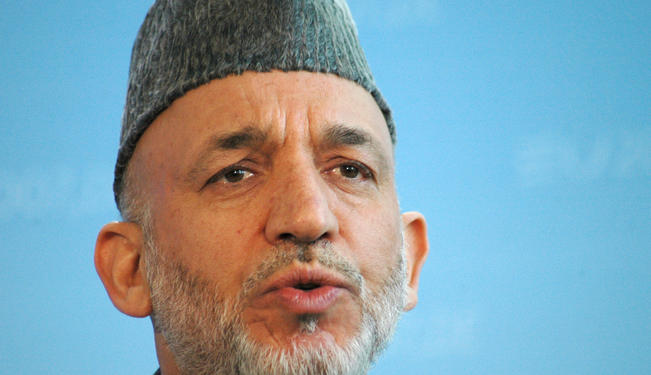 Karzai genuinely appears to want to leave Afghan peace as his legacy.

Americans are well on their way out of Afghanistan's war, and they have not needed the country's most famous illicit export to get them to forget the point of US involvement there. Troop casualties fell 60% with last year's drawdown in forces, and a comfortable majority sees no need to keep any US forces there past December this year.

Afghans, however, are not seeing fewer casualties. Recently, the United Nations reported that Afghan civilian casualties rose by 14% last year, even as the international forces ramped down their presence; deaths among women and children surged to their highest levels since 2009. Afghan military officers are now reported to be agitating openly for President Hamid Karzai to approve the pending bilateral security pact to keep residual US forces in Afghanistan at least a few more years.

Karzai's refusal to sign the painstakingly negotiated security agreement and his increasingly vituperative criticism of US behavior have deeply angered Washington. Vexed congressmen voted to slash aid for next year by half, Presidential Advisor John Podesta described him as "dangerously erratic," and Senator John McCain called him "paranoid and irrational."

But it turns out the game Karzai has been playing is quite rational, though indeed probably dangerous. He believed secret contacts he had opened with the Taliban, recently revealed by The New York Times, were an opportunity at last for Afghans to end their country's 35-year war. Karzai genuinely appears to want to leave Afghan peace as his legacy, while the Americans seem resigned to leaving Afghanistan with its war.

The Price of Failure

Karzai implored George Bush for years to allow peace talks with the insurgency. When US President Barack Obama did open the door to talks, Karzai created a high peace council to win over bitterly anti-Taliban Afghans to accept compromise with the hated insurgents — and he hectored Obama to ensure the Afghan government was at the negotiations.

Karzai became agitated as the talks faltered amid recriminations over US failure to deliver leading Taliban figures long held in Guantanamo, and declared US reengagement in peace negotiations was a precondition for approving the bilateral security agreement. His releases of Taliban fighters, whom the Americans had handed over to him, enraged US officials; it turns out they were his own confidence-building measures for opening direct talks with the Taliban.

Though the Taliban's chief propagandist acknowledged that Karzai's failure to sign the security pact would "create positive relations with him," the insurgency quickly disavowed the contacts with the Afghan president as soon as they became public. After all, war-weary fighters in their ranks might begin to ask why they should keep dying if Kabul was ready to strike a deal that would send the Americans on their way.

Perhaps the Taliban were playing a credulous Karzai for a fool all along. They have done so in the past with other peace "feelers" that ultimately proved lethal. But Karzai's extraordinary effort to win their trust by feverish criticism of his American allies can only permanently redound to Taliban advantage if, in pique, Washington slashes its financial assistance to Afghanistan just as Karzai leaves the presidency. It would be mad to handicap Kabul's republican regime at its most vulnerable moment of transition.

Strikingly, none of the leading candidates to succeed Karzai in April's presidential election calls for rejection of the security agreement with Washington. If there were a significant pocket of Afghan public opposition to continued Western involvement in Afghanistan, one would expect at least one candidate to differentiate himself from the pack by opposing the pact.

Karzai's public jousting with Washington over the accord may have raised his stature with the Afghan public, disproving the hoary Taliban claim he is just a US puppet. It has certainly focused Afghans on the real dangers of going it alone. Even the Russians and Chinese are urging him to sign it.

With the Taliban reverting to rejectionism, Karzai appears prepared to do another pirouette. His foreign minister recently assured Germans, who together with Italians would be the core of the European training mission alongside Americans next year, that: "Without a doubt, the president will sign the security agreement and is interested in signing it before the elections."

Congressional appropriators should quickly restore next year's funding for aid to Afghanistan lest drastically reduced numbers get locked into federal budgets. Afghanistan's new president should not enter office with the country's financial lifeline in doubt.

Curiously, Senator McCain attributes Karzai's "trying to negotiate with the Taliban" to his belief that Obama is inclined to pull even the residual US force out of Afghanistan by the end of 2016. The suspicion that Obama is interested in a full withdrawal well ahead of the ten-year expiration of the bilateral security agreement is intriguing.

That hint can keep the door open to a negotiated peace. Blind to the changes in Afghanistan since 2001, the insurgency's leaders imagine that the country's republican regime will unravel as soon as US troops are out of their way. Reality will catch up to them and their foot-soldiers soon enough. It is hard to see how an aging insurgency that scorns elections and depends on a threadbare schizophrenic neighbor for protection can topple a government with broad international financial support and the legitimacy that flows from elections.

And the much-derided President Karzai, who upended recent Afghan history by never lining up his critics before firing squads, will again set a wholesome precedent by retiring gracefully from office when his constitutional term is up. That in itself is a legacy worth respecting.