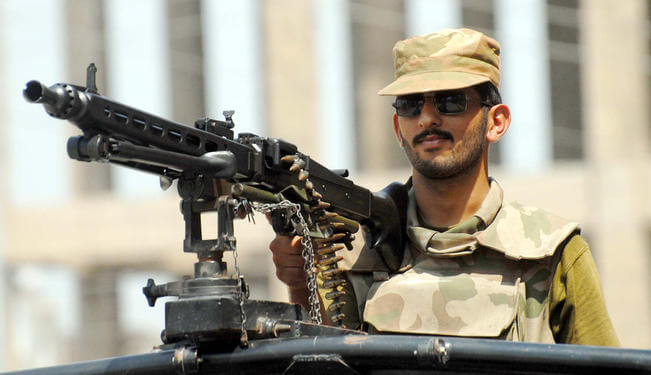 An overly hasty exit from Afghanistan could embolden terrorist groups.

In just over a decade, what started as the War on Terror instead morphed into a badly delayed and compromised exercise in nation-building in Afghanistan.

This failure, based on an inadequate appreciation of ground realities, is now being compounded by the West’s desperation to get out of the country. The consequences of this hurried exit are likely to be catastrophic. Afghanistan will again be thrown to the wolves, while Pakistan, once more, would earn a driver’s seat in its neighbor’s future.

Unsurprisingly, there is a belief among Afghans that the Americans, even if they remain engaged in post-2014 Afghanistan, will “cherry pick” who to take on — their proposed deployment levels simply do not inspire confidence that they would be enough of a deterrent to insurgents and their patrons in Pakistan.

Washington’s proposed deployment levels also seem symbolic at best, suggesting a reluctance to dismantle the infrastructure of terrorism used by the Taliban, preferring instead to leave such responsibility to the poorly provisioned Afghan National Security Forces and to accept a Pakistani presence across the Durand Line as a fait accompli.

This approach could very likely invite global and regional terrorist outfits back in Afghanistan. The West, China, Russia and the central Asian republics should all have a serious cause for concern with the foreseeable implications of this vacuum left from the drawdown of US and NATO forces.

Most notably, as Pakistan seeks to assert itself after the withdrawal US forces, there are worrying prospects of Lashkar-e-Taiba (LeT) being inducted in aid of their Taliban brethren.

LeT is one of the most active terrorist outfits in South Asia. It operates from Pakistan and is widely considered as a tool used by the country’s Inter-Services Intelligence (ISI) to launch terrorist attacks in India and foment unrest. Despite being officially “banned” in Pakistan, the leadership of LeT enjoys unceasing support from organs of the state. The focus of LeT has largely been the Indian-administered Kashmir, but they have also been associated with other terrorist groups such as al-Qaeda, Jaish-e-Mohammed, Hizb-ul-Mujahideen, and the Taliban.

After launching the terrorist attacks in Mumbai in November 2008, LeT proved they had special forces-like prowess: an impressive intelligence gathering capability; recruits like David Colman Headley, who could be many things to many people; and a clandestine presence in various parts of the world.

Inevitably, if LeT operates in a foreign land as a mercenary force, ISI restraints would wither. LeT could potentially break away. The temptation to join other causes, for ideology or money, as Islamist warriors would be far too compelling for them. Their Wahhabi inclination would make their involvement in Sunni causes, of which there are many, easier to countenance. This Wahhabi link could also potentially lead to LeT making common cause with al-Qaeda, transforming their ideological convergence into strong operational links, and aiding their return to Afghanistan.

This is, unfortunately, not the end of the story. Other terrorist groups like the Islamic Movement of Uzbekistan (IMU), seduced by the turn of events, could also resurface and relocate to Afghanistan. IMU shares long-standing fraternal relations with LeT, forged by a common vision of a pan-Islamic entity that would stretch from Central to South Asia. The terrorist group, whose aim is to overthrow the Uzbek president, is also affiliated with al-Qaeda.

The East Turkestan Islamic Movement (ETIM), consisting largely of Uyghur Muslims from China, is another group that has received training and funding from al-Qaeda. As recent as March 14, its leader declared China as the enemy of all Muslims.

The neat compartmentalizing of aims between al-Qaeda and these outfits is more by design than chance. For instance, al-Qaeda’s targets are Muslim countries and the Arab world, whereas LeT’s avowed aim is to establish a caliphate, extending in a Mughal-era like arc from South Asia to Central Asia.

However, LeT, often likened to a virtual B team of al-Qaeda, also has global ambitions and has vowed to plant the “flag of Islam” in Washington, Tel Aviv and New Delhi. It has a network in South and Southeast Asia, extensive links in Central Asia, and sleeper cells in the US, Europe, Africa, Asia and Australia.

Similarly, while IMU and ETIM were movements that originally aimed at specific objectives and comprised primarily of single ethnic groups as their members, they have expanded their aims as well as membership. Both organizations have members from multiple ethnic groups and these groups ally with any regional or global terrorist outfit that would help them sustain their aims. It does not take much for such groups, who share ideological beliefs with other radical Islamists like al-Qaeda, to forge operational and financial ties, combine training and logistics, and broaden their agenda.

This is a worrying prospect, not just in theory. The first signs of heightened LeT activity all along the Durand Line, in areas that Pakistan considers crucial to its interests, are already there. Earlier, there had been reports of LeT being involved in raids across the Durand Line to counter Mullah Fazlullah. They are also known to be working closely along with the Haqqani network. Many ETIM terrorists also have a sanctuary in the highly volatile Kunar and Nuristan provinces of Afghanistan.

The transitions in Afghanistan for 2014 have thus been badly planned and the West has failed to learn from history. It would have been more apposite if the West had given a year or two for a new Afghan president to consolidate before planning their retreat. It is Afghanistan’s neighbors and the region that will have to pay the price for this hasty withdrawal. Of course, there is still time for the international community to work on a dialogue involving regional powers to put together a security mechanism.

The manner in which the US handles its Afghan policy will impact on the perception of its role as the sole superpower. That will, in turn, have an impact on the floundering global War on Terror. It is perhaps still not too late to revert back to the original objective: of dismantling the safe havens for terrorists, destroying their infrastructure, and diminishing the possibility of Afghanistan being held hostage again by radical extremist elements.