Buzzfeed has made what many take to be a shocking revelation about how the world’s most powerful financial institutions skirt morality and the law. Others who have followed the activities of the biggest international banks over recent decades may simply wonder why anyone should be surprised. There is one difference that merits calling this a scoop. This time we have hard documentary evidence: the FinCEN Files.

Here is how Buzzfeed reports the basic facts: “A huge trove of secret government documents reveals for the first time how the giants of Western banking move trillions of dollars in suspicious transactions, enriching themselves and their shareholders while facilitating the work of terrorists, kleptocrats, and drug kingpins.” The FinCEN Files consist of official suspicious activity reports (SARs) on banking practices that “expose an underlying truth of the modern era: The networks through which dirty money traverse[s] the world have become vital arteries of the global economy.”

Money in amounts sufficient for alert major banks to take a keen interest in handling it, whatever its origin.

Rather than being a shocking revelation, this appears to be the banal confirmation of the observable logic at the core of today’s financial system. Like artificial intelligence, money has no moral sense. It follows the obscure code programmed into the system. The most surprising thing about the reaction to the Buzzfeed revelations is that some people in the media feign being surprised.

Experience shows that there is no such thing as an effective punishment for financial crimes. Ordinary crimes such as theft, drug possession, assault, rape and murder provoke direct and highly demonstrative penalties. Theoretically, it is a precisely coded program with a largely inflexible system of weights and measures for common criminals, though it does allow for a class of uncommon criminals who may escape the weight of the law (the wealthy). When punishments for individual crimes are commonly meted out, they tend to inhibit further acts, first in the short term, through incarceration, but often in the long term, thanks to the severity of the lesson. On the other hand, the encouragement of recidivism is actively built into the system as a way of perpetuating a common criminal class.

In contrast, the regulators and the courts tend to treat financial crimes as corporate crimes, even when committed by identified individuals. After much wrangling and moralizing to please the media while vaunting their commitment to justice, the courts assess fines that are carefully calculated to eat slightly into a firm’s profits but never to imperil or inhibit the company’s business. The fines assessed represents a sum designed to impress the public — millions or billions — but which represents a fraction of the profits made from the ongoing criminal acts.

Interviewed by the German public broadcast service DW, German economist Lars Feld explains: “It’s very easy for money launderers to avoid the regulatory channels.” He points out that “for many years,” there has been “a kind of regulatory spiral in which the money launderers are always a step ahead of the authorities.” That appears to be the rule of the game, respected by the regulators themselves. As the individuals who commit the crimes receive bonuses for performance and have nothing to fear personally when and if punishment is meted out, they will always have the means and the motivation to keep “a step ahead.” It’s a luxury not offered to ordinary criminals, who at best can simply pay off the corrupt local police.

The politicians are the ones who protect the bankers. They do so by failing to intensify enforcement of existing regulations and avoiding drafting new ones. There are two obvious reasons for that. The first is that the criminal corporations, wallowing in the cash generated by their crimes, donate generously to the politician’s electoral campaigns.

The second is that most of the political class sees itself, consciously or unconsciously, as a branch of the corporate elite. Not only do they acquire the habit of seeing lobbyists as their friends and neighbors, but the connections they cultivate will pay off at that critical moment when they leave public office and end up looking for work. Their knowledge, skills and networks are sure to land them well-paid jobs in the private sector, the payoff for public servants who had previously spent their time protecting their new employers from the eventual severity of the law.

Money laundering has existed ever since laws were made to prevent it. But the scale and the degree of impunity attached to the practices revealed by Buzzfeed boggles the mind. “In all, suspicious activity reports in the FinCEN Files flagged more than $2 trillion in transactions between 1999 and 2017.” As should be obvious, the actual files flagged probably represent only a tiny percentage of the monies resulting from suspicious activities.

Thanks to political complicity all along the line, most operations go undetected. The ones that are detected, if punished at all, are done so merely symbolically. Buzzfeed sums it up: “They enable a shadow financial system so wide-ranging and so unchecked that it has become inextricable from the so-called legitimate economy.” No member of the elite — even those who have the title of “regulator” — could want to upset the “legitimate economy.”

The FinCEN Files reflect a pattern that cuts across the entire economy and helps to define a rule at the core of all financial operations. Interviewed last week on The Hill’s “Rising,” David Sirota, editor-at-large at Jacobin magazine, described how private equity companies are using low-interest federal loans obtained in the wake of two crises that have led to permanent quantitative easing to fund dividends for owners. “It’s essentially taking a loan that could be used to invest in the company but the debt is simply used to enrich the private equity owner.”

The general rule that applies to both the banks’ money laundering and private equity’s hijacking of zero-interest federal loans intended to stimulate the economy is simple: If you have access to easy cash from any source, legitimate or illegitimate, take the money and run. These people are financial professionals who respect the same logic and play by the same rules.

The International Monetary Fund reports “economist Gabriel Zucman’s findings in 2017 that individuals alone have stashed $8.7 trillion in tax havens.” The same report reveals that “more comprehensive estimates yield an astonishing total of up to $36 trillion.”

What should now be clear — or rather should have been clear decades ago, at least once the Panama Papers were released in 2016 — is that money in sufficient quantity is clearly far more powerful than the people who possess it. But more significantly it is money — and not people — that makes the decisions that the public and the regulators are expected to attribute to individuals. That paradox alone explains why it is authentically difficult to prosecute the directors and managers responsible for criminal acts, even when the regulators know their names. The bankers are mere pawns of a mathematically structured system that will always approve any decision in which profit will be maximized.

Regulators who attack any individual who has made an incriminating decision or who covers it up risk creating a false impression of going after a single bad apple in a barrel with thousands of others. But if they start pulling them out, they will inevitably discover what should already have been obvious: that the rot is in the wood of the barrel itself. The apples are basically guilty of having chosen that barrel, a fact for which they should be held accountable but which has no meaning since every new apple will be corrupted by its environment.

Until society learns to inspect the barrel itself and either clean it or burn the wood, nothing will change. The task of a new generation of regulators driven by a new generation of politicians with a conscience, if such a scenario were ever to become viable, will be to find some very different and better way of handling and moving the money whose stated purpose — according to the official handbooks — is to lubricate the economy.

The World This Week: Paradise Papers Reveal to be Rich is Glorious 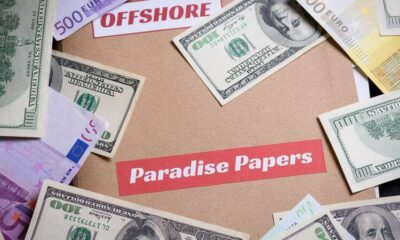