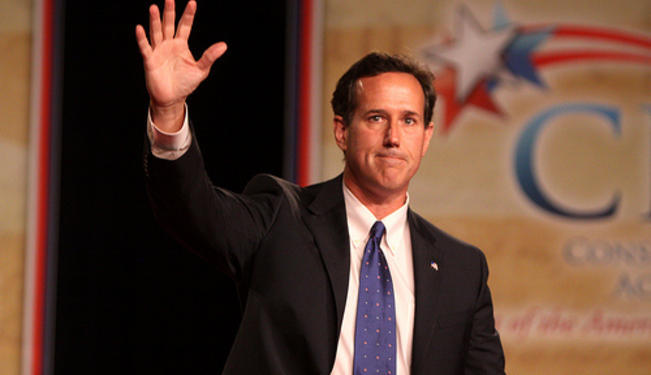 Now that Rick Santorum has emerged as the latest candidate to challenge Mitt Romney, we should take a closer look at what he believes about tax policy. To his credit, Santorum’s policy proposals are less radical than those of the previous anti-Romney’s—Perry, Cain, and Gingrich. For the most part, his plan resembles mainstream conservatism. But two policies suggest a role for the government that may prove unacceptably large to conservative voters.

On income tax, Rick Santorum wants to modestly simplify the system and cut taxes for most taxpayers. He would create an income tax code with only two rates—10% and 28%. He hasn’t stated at what level of income the 28% rate would begin.

Santorum would scrap some tax deductions and credits, but he wouldn’t eliminate the biggest, most politically popular ones: Charitable contributions, mortgage interest, health insurance, retirement savings, and the child credit. In fact, Santorum has proposed tripling the size of the child credit, largely motivated by his conservative “pro-family” views.

Like his fellow Republican candidates, Rick Santorum wants to lower the corporate tax rate. Specifically, he would start by halving the statutory rate—from 35% to 17.5%. He makes no attempt at revenue neutrality; instead of recouping some of these losses by eliminating corporate tax expenditures, he would expand two of them. First, he would modestly increase the tax credit for research and development from 14% to 20%. Second, and more radically, Santorum proposes to eliminate all corporate taxes for manufacturing in the United States.

In sum, Santorum’s tax policy generally resembles mainstream conservative ideology. He would lower taxes across-the-board for individuals and corporations. As with all the Republican candidates, it remains to be seen whether Santorum can implement enough spending cuts in order to offset these large reductions in revenues.

Beyond these general concerns (which Matt Yglesias covers fairly well here), we should take a closer look at two of Santorum’s unique policy proposals: increasing the child credit, and eliminating corporate taxes for domestic manufacturers.

For now, I’ll remain agnostic about whether those two proposals would be good policy—they very well may be. But one thing is clear: These policies represent the federal government increasing its involvement in the market and our lives, contrary to Republican ideology.

Tax favoritism for manufacturing clearly violates the conservative belief that the market should allocate capital as it best sees fit. A “pure” conservative would prefer lower tax rates across the board, while letting the market decide which industries succeed and fail. Similarly, increasing the tax credit would effectively pay couples an additional $2,000 for each child that they have. This might be viewed as heavy-handed government involvement in what should be a very personal decision—whether or not to have children.

So while Santorum’s broad plans for income and corporate taxes are consistent with mainstream conservative economics, his two departures—the child credit and manufacturing tax preference—suggest a larger role for the federal government in the market and in family decisions. These proposals may be attractive to religious conservatives and blue-collar workers, but they should worry strong supporters of free markets.