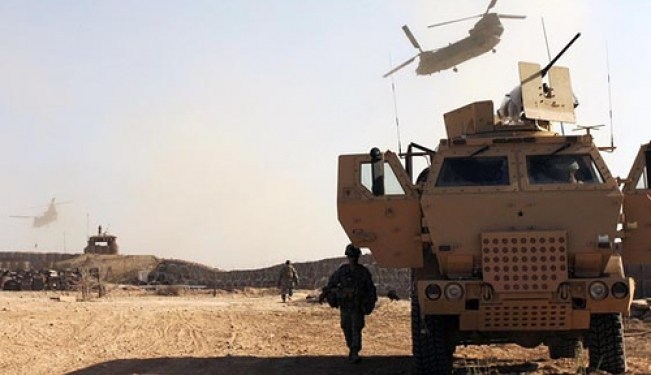 The October 31 attacks in Afghanistan are further complicating matters for US and NATO troops in the region and underlining the question of how best to leave Afghanistan.

This year's Halloween (Oct 31) has been horrific for the US and NATO (North Atlantic Treaty Organization) forces. The deadly suicide car bomb attack on an armor-plated US military bus in Kabul on Saturday (October 29) that killed 13 American and four Afghan nationals is the biggest single loss of life for the US since October 2001.

This audacious attack could be ominous for a war-weary Obama administration that is positioning itself for re-election to the White House. The last such attack in Kabul occurred on May 18, 2010, when five US personnel and one Canadian were killed by a suicide bomber in the same fortified area where Saturday's attack took place.

The Taliban has claimed responsibility for the attack and once again demonstrated its ability to carry out such attacks almost at will. Concurrently, three NATO personnel were killed by an Afghan trainee soldier in the Kandahar province on the same day, while in the Kunar province, a teenage girl chose the suicide-bomber route to attack the local Afghan intelligence office.

The sub-text in cyber-space and elsewhere is that this is only a fraction of the violence unleashed by the US and its allies against the Taliban and their support base – and more can be expected.

This sharp spike in violence comes against the backdrop of the just released (October 28 ) US Department of Defense biannual report on Afghanistan. Titled 'Report on Progress Toward Security and Stability in Afghanistan' the 138-page document is a comprehensive survey of the US-led war against terror in Afghanistan – Operation Enduring Freedom (OEF).

The preamble notes that since the first Report was released in April this year, the International Security Assistance Force (ISAF) and "its Afghan partners have made important security gains, reversing violence trends in much of the country (except along the border with Pakistan), and beginning transition to Afghan security lead in seven areas." Clearly Kabul is not yet as 'secure' as the US Department of Defense had perceived.

Given the nature of the complex, contradictory and opaque security dynamic in the Af-Pak region, it would have been imprudent for the US Department of Defense to assert that the terror machinery in the region has been successfully quarantined. The Mike Mullen testimony and the admonishment administered by US Secretary of State Hillary Clinton during her recent visit to Islamabad are illustrative of the US dilemma in addressing the supply-side of the terror networks.

Thus the October Report further notes: "Although security continues to improve, the insurgency's safe havens in Pakistan as well as the limited capacity of the Afghan Government remain the biggest risks to the process of turning security gains into a durable, stable Afghanistan. The insurgency remains resilient, benefiting from safe havens inside Pakistan, with a notable operational capacity, as reflected in isolated high-profile attacks and elevated violence levels in eastern Afghanistan."

Both the pre-Halloween Kabul attack and the US Department of Defense Report are of considerable salience to India which has been a victim, since the early 1990s of the same terror machinery that the US and NATO troops are now trying to contain. Pakistan's military establishment is a central player – on both sides of the ill-fated OEF. The irrefutable recall is best symbolised in the tapped telephone conversation between Pak Army Chief General Musharraf and his CGS Lt Gen Mohammed Aziz during the 1999 Kargil War.

The phrase: "the scruff of the militants necks is in our hands" says it all – and the US Department of Defense and the Pentagon were aware of this perfidy – but chose not to take it on board while strategising for OEF. In like fashion the Kunduz airlift of December 2001 that allowed the Pak military to rescue its personnel who were supporting the Taliban (from Afghanistan) before the US stepped up its attack as part of OEF are part of the US institutional memory.

Comparisons have been made that this is the Vietnam moment in the long drawn out US war in Afghanistan. However, there is one big difference. At that time, the US was not playing both sides of that tragic war against the Vietcong. In this case due to a very ill conceived Faustian bargain with the Pak military – successive US Presidents have not just supped – but funded and armed the proverbial Beelzebub and thus put their troops in harms way.

Recent developments in the blood-splattered Af-Pak region only reiterate this bitter reality and the Kabul attack is a macabre 'trick-or-treat' Halloween for the hapless US/NATO troops. They alas are deployed in a war whose ethical underpinning and political objectives remain muddied and mired in the electoral and realpolitik compulsions of the world's oldest and militarily most powerful democracy.

*[This article originally appeared in Economic Times on October 31, 2011]