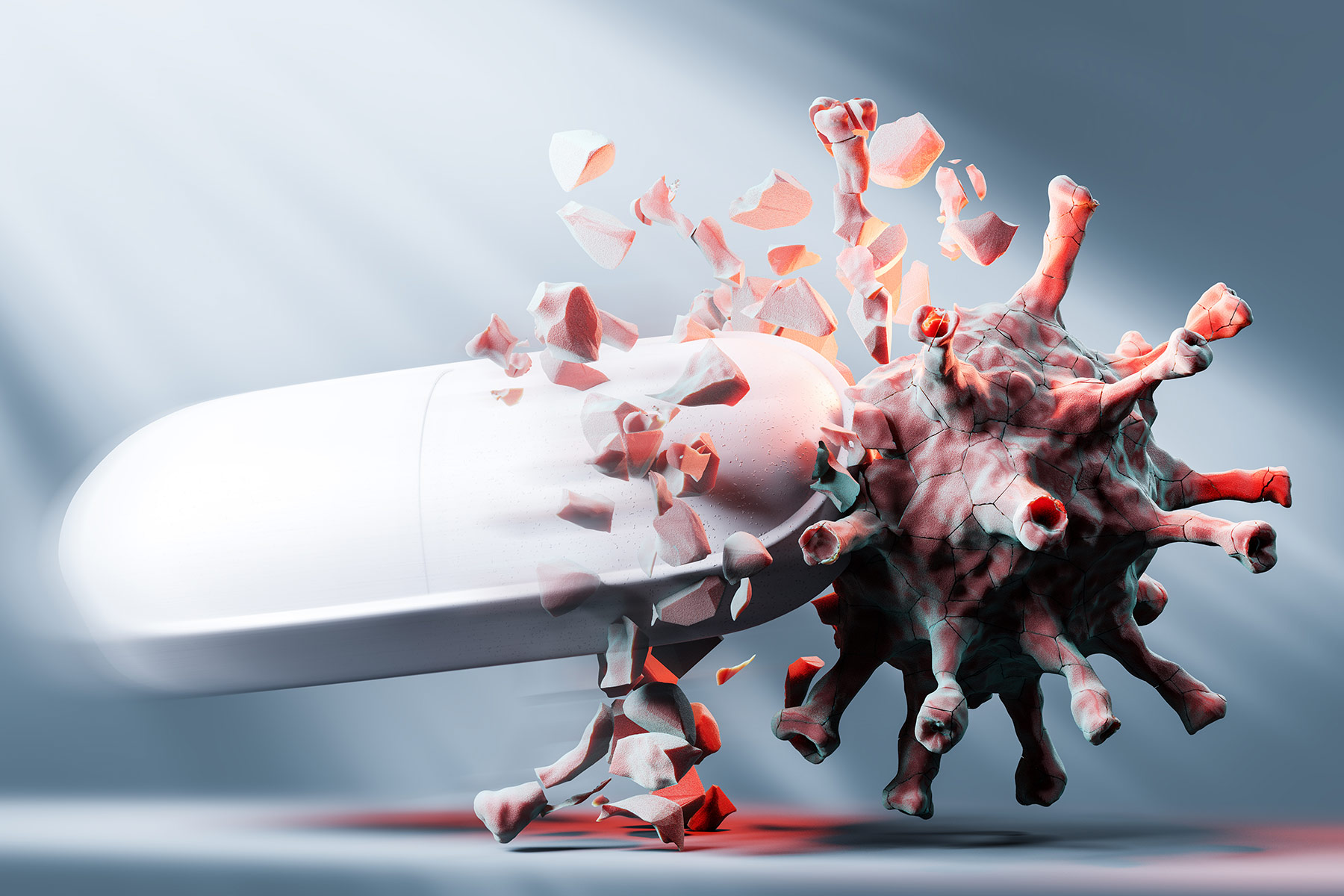 The media announced last week what appears to be a major breakthrough in pandemic news. It could be a turning point in the history of a pandemic that will soon celebrate its second birthday. “In the not-too-distant future,” according to MarketWatch, “you may be able to walk into a doctor’s office, get tested for SARS-CoV-2, and walk out with pills or a prescription if you end up testing positive for the virus.”

Since the bulk of humanity, including those already vaccinated, is still susceptible to being infected by SARS-CoV-2 — the virus that causes COVID-19 — we should all rejoice, though not quite as gleefully as Merck, the pharmaceutical company that has produced the pill. “It makes sense,” MarketWatch explains, “that pharmaceutical companies are trying to figure out whether antivirals can reduce the risk of someone dying or ending up with organ damage and an expensive hospital stay.”

Make dollars, when applied to the actions of any large pharmaceutical firm

“Finally, we have another potential tool,”, declared the media’s omnipresent guru, Dr. Anthony Fauci. More significantly, Merck will have a windfall estimated at $7 billion from its sales of molnupiravir by the end of the year. The US government “has already placed an order for 1.7 million courses of treatment, at a cost of $700 per patient.” Newsweek calls it “one of the most lucrative drugs ever.”

As American media rejoices, British media seem somewhat more reserved. The Independent points out that “an analysis of drug pricing by Harvard School of Public Health and King’s College Hospital in London found that it takes about $17.74 to produce a five-day course.” In its lengthy article that explores all the difficulties of deploying the drug across the globe, The New York Times never mentions the gap between the cost of production and the price at which Merck is pitching the treatment. Instead, it endorses the reasoning cited by one expert who calls for “donors to step up with funds to make sure treatments reach everyone.” Bill Gates, the guarantor of global health, are you listening?

In contrast with The New York Times, The Independent notes a simple historical fact: “The pill, hailed as a breakthrough in the treatment of coronavirus, was originally developed to treat influenza using government funds.” In other words, it was the public and not Merck who paid for the product’s development. It’s a classic narrative of pharmaceutical opportunism. Emory University received $29 million in grants between 2013 to 2020 to develop the drug with no input from Merck or anyone else in the industry. In May 2020, in the midst of the pandemonium provoked by the pandemic, sensing that it might be a goldmine, Merck “bought the exclusive rights to sell and manufacture the drug worldwide.” This sums up the logic of today’s rentier capitalism.

One thing the saga of successive surges of COVID-19 should have taught humanity is that neither prevention (vaccination) nor treatment will be effective if the effort is not shared and coordinated globally. The history of COVID-19 offers an even more fundamental and imperative lesson. Health is the one feature of human life that should never be individualized and subjected to the logic of consumer culture.

Consumer culture assumes that individuals will make wise economic decisions to purchase what is best or most attractive to meet their personal needs. It also assumes that those who want something — whether it’s a shampoo, a kitchen robot, a surgical mask or a vaccination — will make the effort to afford the purchase. For most people, this means seeking employment. Finally, it assumes that those who accumulate excess means — the capitalists — will decide to use those means to produce goods or services, not with a view to meeting the needs of humanity or of society, but for the prospect of making sales pitched at those individuals who have the means to pay.

If the tyranny of consumer logic wasn’t enough to complicate humanity’s response to COVID-19, the acceptance of the notion that nation-states are the only legitimate arbiters of global decisions constitutes another obstacle to problem-solving. The Times assesses the state of the marketplace for Merck’s magic pill and fatalistically concludes, “All this means that treatments could remain largely with nations able to pay for early access, as they have done with vaccines.” As usual, The Times tells us: Don’t argue with the logic of either capitalism or nationalism.

Newsweek’s account flirts with the comedy of misplaced optimism. It quotes Nicholas Kartsonis, a senior Merck executive who explains the logic behind Merck’s $712 price tag. “We set that price before we had any data, so that’s just one contract. Obviously we’re going to be responsible about this and make this drug as accessible to as many people around the world as we can.” The Times uncritically accepts the “obvious.” After usefully reminding its readers that “Merck was criticized two decades ago for selling its H.I.V. drugs at prices unaffordable in Africa,” it claims that the lesson has been learned. “This time, the company recognized the imperative of widening access early.” When total access is the only solution, “widening access” could justifiably be called a crime.

When challenged on their addiction to greed (for which no treatment appears to exist), Big Pharma predictably trots out their standard argument. A Merck spokesperson explained to Newsweek “that estimates of production cost of manufacturing by generics makers don’t take into account the ‘billions that are invested by the research-based pharmaceutical industry’ into research and development.” The spokesperson’s use of the passive to assert that “billions that are invested” cleverly hides the fact that the pharmaceutical companies are not the ones making the investment. Pharmaceutical firms prefer to buy the rights to promising drugs after they have been developed with public funds. What they own is the right to price the drug, which is then sold back at an exorbitant profit to the people who financed its development.

The New York Times offers another statement by a Merck executive that flirts with comedy. Jenelle Krishnamoorthy, Merck’s vice president for global policy, explains the reasoning behind the company’s generosity in offering lower prices outside of wealthy markets. It is “to make sure that, especially in low- and middle-income countries where they don’t have the strongest health care systems, that this would have very wide access.”

Krishnamoorthy appears to assume that the US is an example of one of “the strongest health care systems.” If so, her idea of “strong” correlates with the ability of some people — including the government — to pay a high price. The US has the world’s most expensive health care system. It also has arguably the most dysfunctional system of any developed nation. From Merck’s point of view, a government that will buy 1.7 million units at $712 is a “strong” health care system. As usual, strength and even purpose are measured in monetary value.

The Times evokes the possibility that Merck may allow governments in the poorest nations to “buy molnupiravir for well under $20 per five-day course, compared with $712 in the U.S. deal.” It later quotes an “industry executive who was not authorized to speak on the record” who “said he expected his firm to produce the drug for less than $10 per course.” What entrepreneur in the world would not accept to make immediate massive sales of a product they took no risk investing in with the guarantee of at least a 100% markup even in the world’s poorest markets?

The Times article goes on to reveal other anomalies that will prevent a global solution. All the calculations are based on how much restraint the pharmaceutical companies are likely to accept in shaving a few percentage points off their exorbitant, no-risk margins. The article even calls this kind of grudging concession “a smart business move for the company,” citing the fact that the firms “know that if they don’t address the access challenges, they will be slammed.”

All this reasoning leads to the inexorable conclusion that pandemics may rage, human lives will be sacrificed through the failure to concert and coordinate, and political chaos may ensue. But a world regulated by the profits of monopolistic companies is here to stay. It remains the unassailable foundation of the modern economy.