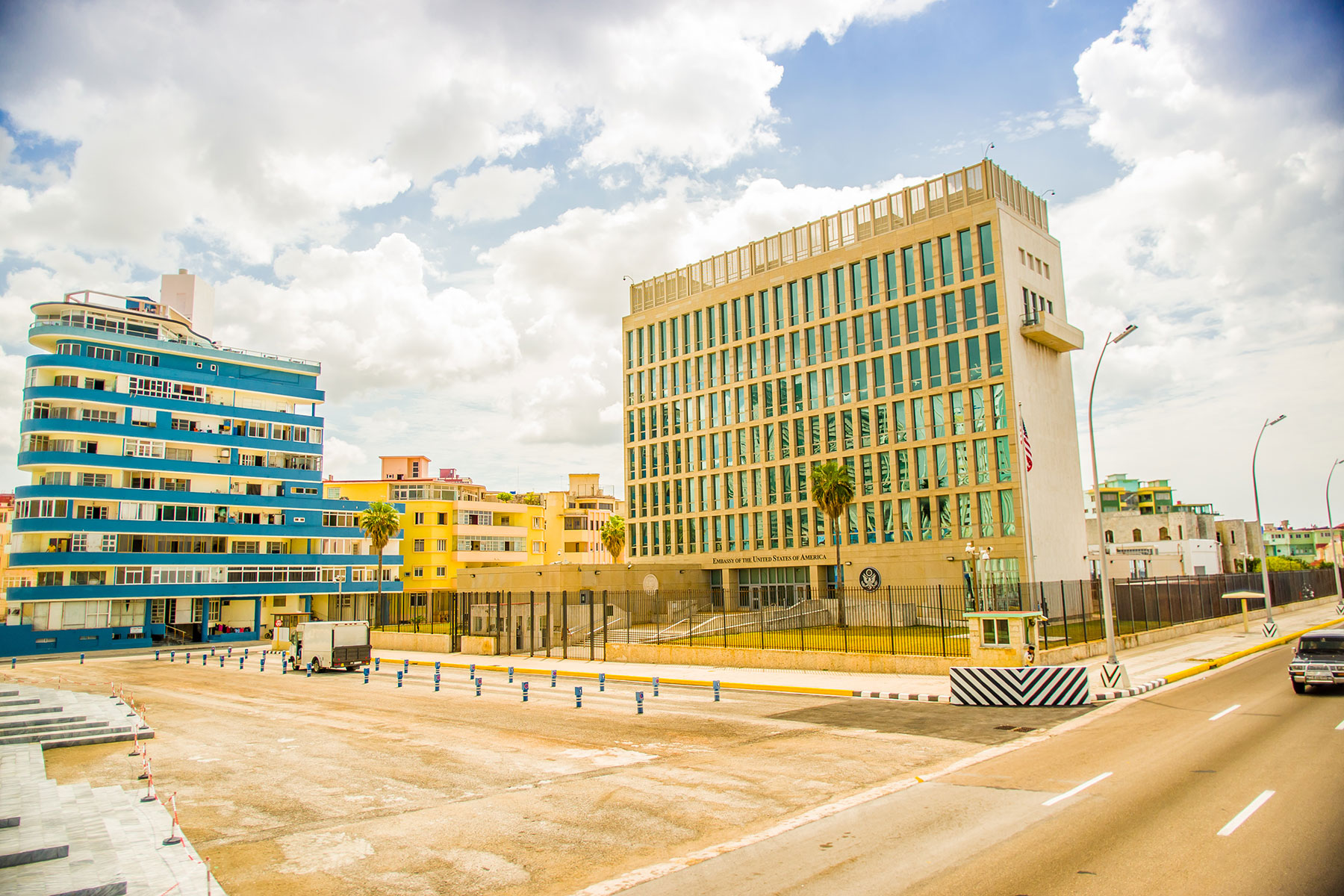 The US Embassy in Havana, Cuba. © Fotos593 / Shutterstock

It has been a full week since we last reported on the Cold War psychodrama known as the Havana syndrome. But the news keeps coming, and though we are no wiser as to its physical causes or whodunnit, the media and the US government are not about to let it go.

As we suggested last week, an effective Cold War mentality relies on the repeated fomenting of irrational fear of a designated enemy, preferably Russia. Now, a scoop from BuzzFeed News originating in the US State Department is pointing in the direction of an alternative explanation that, if taken seriously, could eliminate the fear factor. For the moment, the legacy media — notably The New York Times, The Washington Post — have considered that news not yet fit to print.

The Futile Quest for Accountability

Last week, Business Insider breathlessly published an article with the title, “The CIA evacuated an officer with ‘Havana Syndrome’ symptoms from Serbia, report says, as the US intensifies investigations into the mysterious illness.” A day later, The Times recounted the case of a former CIA operative, Marc E. Polymeropoulos, claiming to have been targeted in Moscow in 2017. The Washington Post’s editorial board made a desperate appeal to identify the culprit in the sacred name of “national security.” While all this was going on, BuzzFeed revealed that a State Department report from November 2018 — kept secret for three years — roundly contradicts claims of targeted attacks.

Buzzfeed notes that a panel assembled last year by the National Academies of Sciences panel, which bizarrely had no access to the State Department’s 2018 report, continued to assert “that microwaves were the ‘most plausible’ cause of the symptoms.”

The National Academies of Sciences panel stated that microwaves were plausible. It also acknowledged that there is no evidence to back up that judgment. “Multiple hypotheses and mechanisms have been proposed to explain these clinical cases,” their report insists, “but evidence has been lacking, no hypothesis has been proven, and the circumstances remain unclear.” Certain elements of the report — such as the mention of “significant research in Russia” — appear to indicate that the committee was at the very least influenced by the preoccupations of the intelligence community.

Established in 1960, JASON is an “independent scientific advisory group that provides consulting services to the U.S. government on matters of defense science and technology.” Buzzfeed calls it “an elite scientific board.” The group brings together 65 prestigious names in science, including eleven Nobel prize-winners. Though it has worked intimately with the deepest levels of national security over the years, it has maintained what appears to be a cautious independence from extreme political pressures since its inception.

JASON published its report in November 2018, during Donald Trump’s presidency. In March 2019, the Department of Defense shockingly informed JASON’s members that their services were no longer required. Is there a relationship between the two events? Does that explain why the report remained secret until BuzzFeed’s revelation last week? (Buzzfeed got the report by putting through a Freedom of Information Act request, something the journalists at The Times and The Post following the story apparently never thought of doing.)

Was the new panel appointed with the specific purpose of contradicting JASON’s conclusions by insisting on the plausibility of the microwave hypothesis? After two studies were launched under the Trump administration, President Joe Biden’s State Department has now put together “a new panel of experts from across the Intelligence Community, academia, and the private sector with access to the full range of information available to the government.” What will this new group of experts with access to “the full range” come up with? And what does the presence of the intelligence community in its ranks bode concerning its capacity to tell the truth?

On September 28, The Washington Post editorial board expressed the reigning orthodoxy when it published an op-ed with the title, “The source of the ‘Havana syndrome’ must be found. National security demands it.” The Post’s editorial board found it “frustrating that Americans are being sent abroad on vital military, diplomatic or intelligence missions facing unknown peril from invisible sources and that the U.S. government has so far been unable, with all its capabilities, to pinpoint what is causing this danger.” The key phrase here is “facing unknown peril from invisible sources.” To stoke the flames of a new Cold War, fear is essential.

JASON’s scientists mobilized not only their specialized scientific knowledge, but also their common sense. Anyone with knowledge of the history of psychosocial diseases can understand why the JASON team refused to exclude the hypothesis that “’psychogenic’ mass psychology effects may have played a role.”

In October 2019, the Journal of the Royal Society of Medicine published an article with the title, “Challenging the diagnosis of ‘Havana Syndrome’ as a novel clinical entity.” The article’s authors, Robert Bartholomew and Robert Baloh, examine the testimony of victims and note similarities with numerous cases of psychogenic mass psychology in the course of recent history. Such phenomena are hardly uncommon in situations of severe stress and uncertainty.

Psychologists are well aware of humans’ susceptibility to suggestion. The conditions experienced by US overseas staff at a moment in history where the traditional image of the US as a force for good in the world has been seriously tarnished can have a devastating impact on the operatives’ mental and physical balance. This applies especially to intelligence operatives, more attuned to risk than others. The Royal Society paper makes a specific point about their psychology: “New staff were not only being briefed on the likelihood that they may become the next targets, they were primed for ‘attacks’ as they were played recordings of the sounds captured by employees in Havana, before taking up their posts.” That may be an example of misguided training, but there is little doubt it can leave deep traces on the trainee.

The authors noticed other considerations that put the idea of microwave or sonic attacks beyond the threshold of credibility: “The attack claims have left experts in physics and acoustics mystified and skeptical as to how subjects located deep within a hotel or their home could be targeted.” Even in the age of drone warfare, there are limits to what obstacles can be breached.

Echoing Buzzfeed’s scoop, Gizmodo notes that the JASON “report was written in 2018, and it clearly hasn’t stopped senior U.S. officials from touting out the microwave theory anyway in the years since.” Nor has it yet influenced the legacy media. Now that they are aware of it, will The Times and The Post mitigate their persistent campaign to see the syndrome as Russian or Chinese warfare? It seems unlikely.

The Royal Society’s article describes how the insidious role even medical staff tend to play. “A key issue here is the power of physicians to shape the presentation of symptoms through suggestion, as many of these complaints are common in the general population (e.g. fatigue, dizziness, headaches, memory problems) and may be reframed to reflect what doctors and government authorities are telling them.”

At the end of the day, we still know nothing concrete about what provoked the symptoms of the 200 cases routinely cited in the media. But we do know something about the trends of this particular moment in human history. “There is a growing consensus in the psychiatric community that the fear and uncertainty that accompanies these events give rise to outbreaks of psychogenic illness,” Bartholomew and Baloh write.  It was the intelligence community that first proposed the concept of VUCA: volatility, uncertainty, complexity and ambiguity. All four have increased in recent years. Some epidemics don’t require a virus to spread.