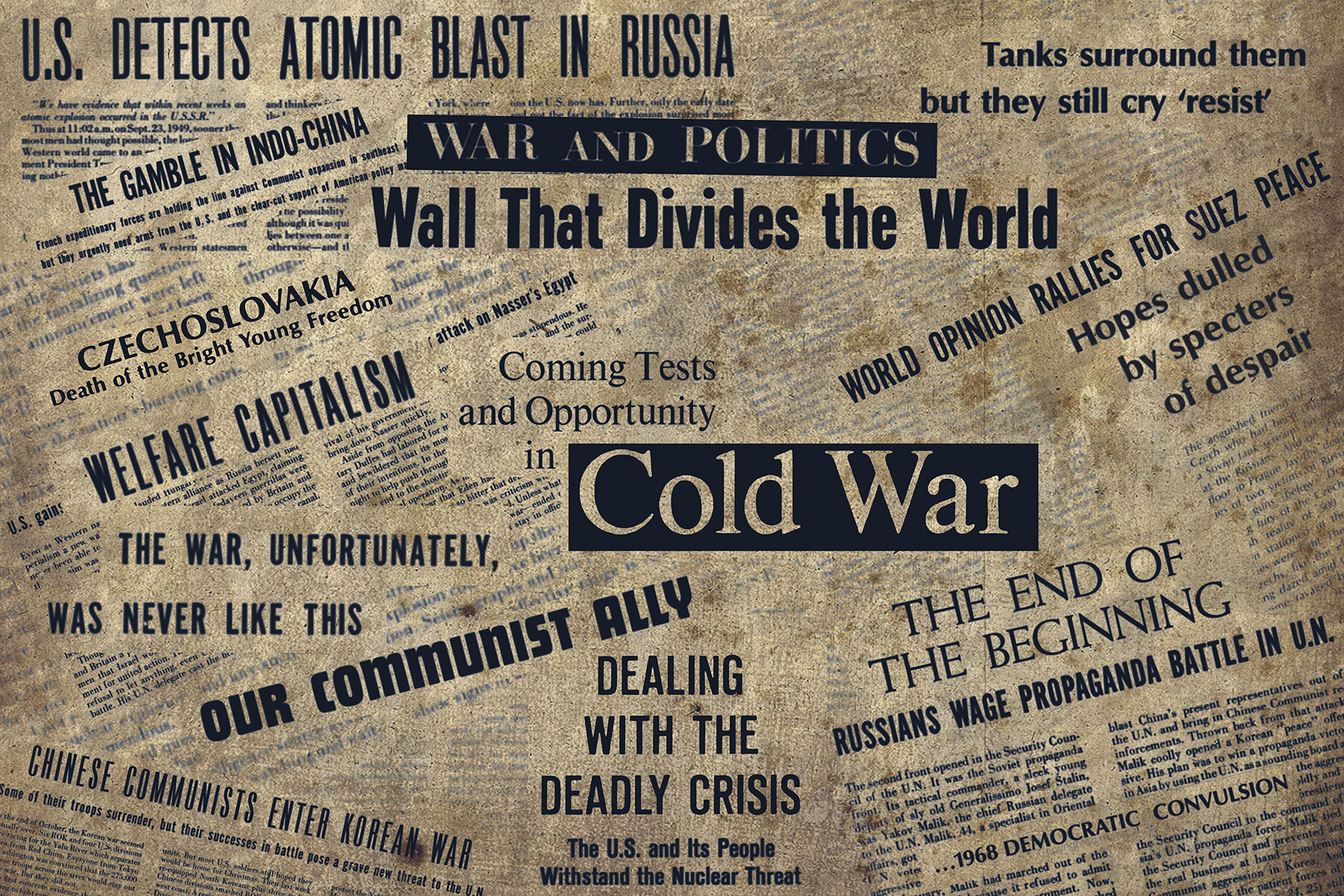 This past week, the geopolitical landscape reached a new Monroe Doctrine moment. This is occurring nearly two centuries after US President James Monroe’s famous pronouncement warning Europeans to stay away from the continent on which the former British colonists were busy rolling out their plan of continental expansion inspired by their belief in “manifest destiny.”

In 1823, the focus was on the Atlantic Ocean and the relations between Europe and Latin America. In 2021, the zone in question is the Pacific and the Indian Ocean. Given the degree of globalization the world economy has achieved in the past 75 years, the brewing showdown between the multicultural East and a decidedly monocultural English-speaking West has far more unanticipated and potentially disturbing consequences for the entire globe than Monroe’s claim to dominance over a largely undeveloped hemisphere. This looks like a clash between two manifest destinies.

Multicultural Europe — the traditional core of the West — may once again find itself the primary victim of a new US-led alliance announcing a modernized doctrine targeting China. France was the first to pay when it received the bombshell news of the creation of AUKUS, a security alliance bringing together the US, the UK and Australia. France cried scandal and recalled its ambassadors to the US and Australia upon learning that a multibillion-dollar contract signed in 2016 to supply Australia with submarines had been canceled. China reacted with even bolder force when it announced its version of the Monroe Doctrine. Chinese President Xi Jinping “urged heads of state to ‘absolutely resist external forces to interfere [in] countries in our region at any excuse, and hold the future of our countries’ development and progress firmly in our own hands.’”

Europe has expressed its solidarity with France, meaning that the crisis will be making waves far into the future. On the Pacific side, after China’s predictable reaction, North Korea followed suit, declaring the AUKUS alliance “extremely undesirable and dangerous” and predicting that it “will upset the strategic balance in the Asia-Pacific region and trigger off a chain of nuclear arms race.”

This would seem to indicate that equipping Australia with nuclear-powered submarines could ring the death knell for any existing hope of containing North Korea’s nuclear ambitions. When considered alongside the Biden administration’s failure to honor its promise to overturn Donald Trump’s withdrawal from the Iran nuclear deal in 2018, this is beginning to look as if a remake of the Cold War arms race of the 1950s may be in the offing. When confusion reigns, nostalgia comes to the rescue.

The strategists behind AUKUS clearly designed it as a showdown between the English-speaking and liberal-thinking West and the rising powerhouse in the East, China. But the scenario gets complicated when considering that the West itself is divided into what may emerge as two camps: the English speakers and the others. The others have long been quietly resisting Francis Fukuyama’s “end of history” that posited the imminent global triumph of the neoliberal political and economic model produced over the past three centuries by the English-speaking world. This may turn into a secondary showdown, a subplot of the East-West showdown.

In this Monroe Doctrine redux, the English-speaking believers in neoliberal imperialism have initiated the action. But at the same time, they find themselves in the role of the jaded European colonial powers two centuries ago toward whom Monroe was flexing his muscles. This time around, China is the rising power claiming the right not only to frame the law in its own backyard, but to identify and exclude trespassers.

The proximity of this event with the official end of the US engagement in Afghanistan, signaling a growing disinterest in the dramas of the Middle East, reveals two parallel trends. The US has clearly decided to build the Chinese threat into something similar to the artificially-magnified Soviet threat that defined the post-WWII world order.

That means the two-decade obsession with Islamist terrorism can now be placed on the back burner in the interest of stimulating a new Cold War mentality toward a rival power capable not just of occasionally felling tall buildings, but of bringing down the capitalist order. But it also serves a short-term interest. With no visible hot wars to justify the nation’s dependence on a militarized economy, it will ensure that investment in military technology and material preparedness will remain at the core of an economy that fears no threat more than world peace.

Declining empires always follow the same pattern. Rather than investing in a transition that could ensure their enduring influence and prosperity in a more complex world, they push their bravado to the limit at the cost of undermining their own cultural and economic integrity.

According to the official record, the Monroe Doctrine warned “European nations that the United States would not tolerate further colonization or puppet monarchs. The doctrine was conceived to meet major concerns of the moment, but it soon became a watchword of U.S. policy in the Western Hemisphere.”

President Theodore Roosevelt officially invoked the Monroe Doctrine to justify sending troops to Santo Domingo (now the Dominican Republic), Nicaragua and Haiti in the first decades of the 20th century. This was a period of active foreign policy in which the US was just discovering its capacity to build an economic empire. That series of military campaigns south of the border have earned the moniker, “The Banana Wars.” They produced one famous military hero in the person of Major-General Smedley Butler. His heroic action also took him as far away as the Philippines and even China, as he participated in quelling the Boxer Rebellion in 1900.

Butler’s place in history turned out to be exceptional and even instructive. Too instructive, in fact, for the taste of an expanding empire, which has done its utmost ever since to erase his saga from the annals of official history.

In 1933, thanks to Butler’s impeccable reputation as a military superhero, a group of American businessmen (including George W. Bush’s grandfather, Prescott Bush) tried to cultivate a special friendship with Butler. They were concerned that newly elected President Franklin D. Roosevelt might be tempted to adopt policies in contradiction with the trend in Europe toward fascist systems of government favorable to moneyed interests. Their plan, usually referred to as the Business Plot, involved overthrowing Roosevelt and placing Butler in the role of charismatic military dictator.

Butler immediately denounced the plot and agreed to testify before a congressional committee. The press played its expected role, deriding Butler’s claims — thanks to the fact that the final report of the committee was never made public. That only happened in the 21st century, decades after Butler’s name and reputation had been erased from Americans’ memory.

The New York Times published a long obituary of Butler in 1940. It only mentioned the Business Plot in the final paragraph, calling it “another episode … when a Congressional committee investigated reports to the effect that General Butler had become mixed up in an attempt to form an American Fascist organization.” It also credited Butler with authoring a book published in 1933 with the title, “Old Gimlet Eye” that recounted his experience of 33 years in the military.

Curiously, The Times neglected to mention another far more memorable book Butler authored and published in 1935. It bore the title, “War is a Racket.” The Business Plot apparently opened Butler’s eyes to the logic behind his decades of service in the military. In the book, he sums up his understanding of that service: “I spent thirty-three years and four months in active military service … And during that period, I spent most of my time being a high class muscle-man for Big Business, for Wall Street, and for the Bankers.”

The New York Times hasn’t changed. Back then, just as it does today, it decided which news was “fit to print.” Mentioning a book about Butler’s heroic activities in war and suppressing a mention of his denunciation of its logic appears perfectly consistent with what legacy media does today. The war economy must be defended from criticism at all costs. It stands as the last hope of maintaining the empire’s stability.