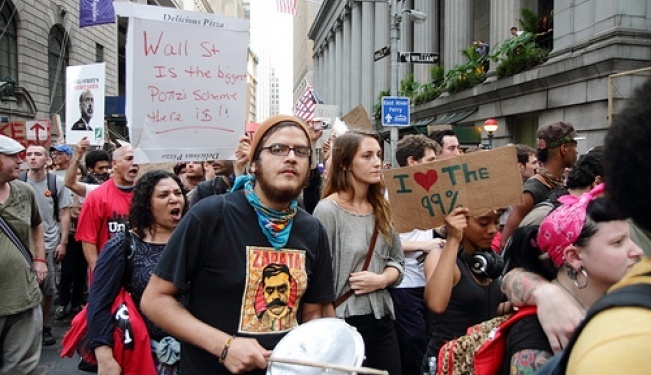 The Occupy Wall Street demonstrations raise legitimate—even if ambiguous—concerns, but will those concerns translate to change in policy or public opinion?

Observers have criticized Occupy Wall Street, often to the protestors’ contentment, for its aimless purpose and uncertain demands. It turns out the movement’s lack of focus is probably one of its greatest assets. People upset by any one of the issues that Occupy Wall Street appears to champion—from dysfunctional government to Wall Street bailouts—can project their own indignation onto the demonstrations. Often, this applies to the celebrities and politicians who have cozied up to the cause. No clear focus has meant more time in the spotlight as well. Attempts to delineate a coherent message are the stuff of op-eds and talk shows, by those who are for and against the demonstrations. Nonetheless, what has helped it grow might be what limits the movement. Gallup polls show that many Americans don’t know enough about their goals to formulate an opinion. Others might find it uncomfortable to sympathize with a group that embraces such a wide spectrum of grievances (some particularly radical). And with no settled demands, the group will find it difficult to realize change.

To the extent that Occupy Wall Street does specify frustrations—for example, that the top 1% has disproportionately gained from income growth and unfairly controls the political process—real reform seems distant. This is largely because affecting change requires leaders and organizational structure, something the movement proudly lacks. Considering their claim that the political system favors those rich enough to finance it, the protestors are naturally skeptical of the very institutions it must work through to be heard. Reflexively dismissing all politicians as corrupt will not further their cause. Policy makers are listening and the protestors would do well to continue the dialogue, not just vent in public squares.

Is the American public “waking up” to the issues Occupy Wall Street raises? This remains to be seen. Forty three percent of the public says it agrees with the goals of Occupy Wall Street, according to YouGov, an Internet polling firm. Even among those earning more than $100,000, more respondents support its goals than oppose them. YouGov also demonstrates that Occupy Wall Street has marginally more support than the Tea Party Movement. The Occupy Wall Street protestors’ animosity towards Wall Street clearly reflects a broader distrust of banks and financial institutions harbored by Americans in general, as measured by the General Social Survey (GSS). Moreover, there is evidence that the movement produced a respectable shift in public opinion and the public dialogue. Gallup reported in April that 57% of Americans believed that money and wealth should be more evenly distributed (a figure that has been relatively stable since the mid-eighties), but a CBS/New York Times poll in late October reported the figure at 66%. A media content survey from Think Progress, a progressive blog, recorded a switch in media coverage from debt and austerity to unemployment, Wall Street and jobs. No surveys are required to see that economic inequality has suddenly become the talk of the town—despite having been high and rising since the seventies.

Still, America has not realized—yet, at least—a “profound change,” as some have suggested. The country’s underlying economic factors—like high unemployment and sluggish growth—likely undergird the movement’s populist appeals. It isn’t hard to imagine Americans celebrating Wall Street, as opposed to occupying it, if only firms were hiring and reporting stellar growth. It is entirely unclear how durable the bump in public opinion will prove. Further, most substantive reforms will probably not enjoy any fashionable appeal like that of the Buffet rule, and will find few friends among the Republicans who currently control Congress. For now, while the movement’s lack of organizational structure gives little optimism for policy change and while the jury is still out in the court of public opinion, we don’t yet know whether Occupy Wall Street is an “emotional outcry” as one former U.S. Ambassador to the UN diplomatically put it, or a movement fast gaining global legitimacy and momentum.