In a recent speech, US presidential candidate Bernie Sanders took on big banks and Wall Street. Veena Trehan breaks it down.

On January 5, US Senator Bernie Sanders gave the most important speech by a presidential candidate this campaign season. The topic: Wall Street and the economy.

“Greed is not good,” proclaimed Sanders, riffing on Gordon Gekko’s famous pronouncement in the movie Wall Street, just miles from that financial center. “In fact, the greed of Wall Street and corporate America is destroying the fabric of our nation. And here is a New Year’s Resolution that I will keep if elected president. If you do not end your greed, we will end it for you.”

The bold speech addressed a topic that should be a main focus of debate, particularly during the race for the presidency. The 2008 financial crash caused a recession that is wiping out $6 to $36 trillion from America’s economy. Yet the talk received scant media coverage.

It’s hard to attribute this to recent high-visibility events. Bernie Sanders is routinely blacked out of the media. Yet since colleges, Congress, liberal think tanks, the mainstream media and both parties embrace financial donors—even while failing to investigate causes of the crash or working to prevent the next one—his message is all the more potent.

Particularly so given his competitiveness. The populist Sanders leads in the first primary state of New Hampshire, draws strong millennia support, excels at grassroots fundraising, and polls better than Hillary Clinton against Republicans.

Sanders delivered the speech with a scope and framing that is rare in American politics and academics. His revolutionary speech illustrated how to transform our economy for greater safety, security and growth.

Sanders started with a focus on inequality: “[The American people] understand that something is profoundly wrong when, in our country today, the top one-tenth of 1% own almost as much wealth as the bottom 90%, and when the 20 richest people own more wealth than the bottom 150 million Americans—half of our population.”

He provided seven points that represent the most effective plan of any presidential candidate. They include ending “Too Big” for-consequences excuses, bank corruption and conflicts of interest. 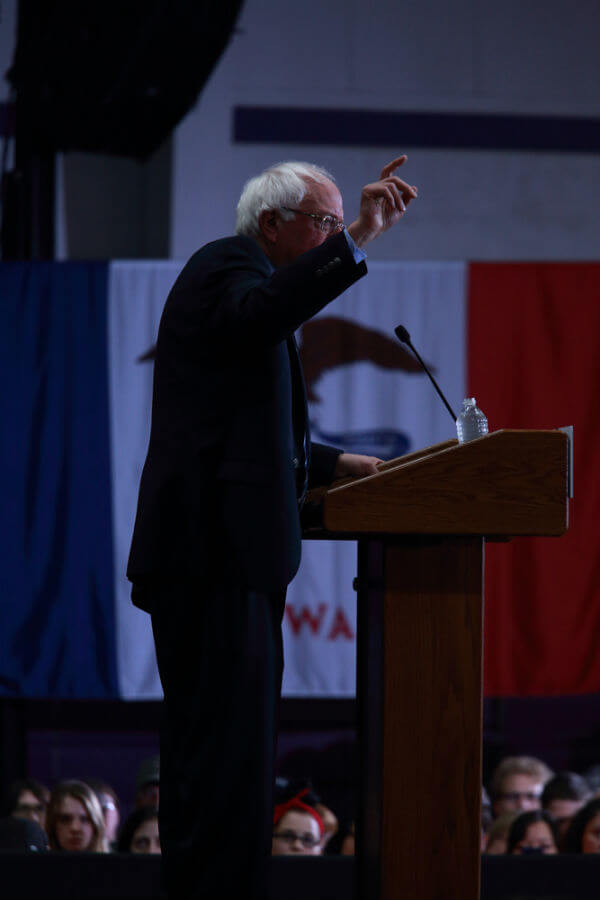 ENDING “TOO BIG TO FAIL”

Wall Street has grown since taxpayers bailed out “Too-Big-To-Fail” banks. But Sanders will end the only socialism bankers love.

“Within the first 100 days of my administration, I will require the secretary of the Treasury Department to establish a ‘Too-Big-to Fail’ list of commercial banks, shadow banks and insurance companies whose failure would pose a catastrophic risk to the United States economy without a taxpayer bailout,” said Sanders.

“Within one year, my administration will break these institutions up so that they no longer pose a grave threat to the economy as authorized under Section 121 of the Dodd-Frank Act.”

Finally, Sanders shot down Hillary Clinton’s oft-reiterated focus on shadow banking as the major problem. She uses it to oppose reinstating the Glass-Steagall Act, which was repealed under her husband’s administration. Clinton claims the law would not have prevented the financial crisis because of the role of shadow banks. Sanders corrected her: they gambled with federally-insured bank deposits from commercial banks.

ENDING “TOO BIG TO JAIL”

Americans are deeply disillusioned because a two-tiered criminal justice system keeps all major Wall Street executives safe from prosecution for their role in the Great Recession, even as marijuana smokers go to jail. This will change, Sanders said, as his administration embraces “Equal Justice Under the Law.”

THE BUSINESS MODEL ON WALL STREET IS A FRAUD

“The reality is that fraud is the business model on Wall Street,” Sanders said. “It is not the exception to the rule. It is the rule. And, in a weak regulatory climate, the likelihood is that Wall Street gets away with a lot more illegal behavior than we know of.”

In fact, according to Sanders, big American financial institutions have been fined $204 billion in the last seven years. He reviewed stories of the Bank of America settling for $16 billion for misleading investors on risky mortgage-backed securities, and JP Morgan settling for $13 billion over charges it sold similarly low-quality securities. He read headlines of banks rigging currencies, allegedly fixing precious metal prices, participating in widespread mortgage fraud, laundering billions for Mexican drug gangs, and illegal foreclosing on military service members.

Sanders finds it unacceptable that Americans pay $4 or $5 at the ATM and pay credit card interest rates as much as 20-30%. “The Bible has a term for this practice. It’s called usury…

Sanders also highlighted many studies showing immoral acts are commonplace. In one, almost 20% of financial service professionals believed that illegal or unethical activity is critical to success.

“Let’s hope we are all wealthy and retired by the time this house of cards falters,” said one Standard & Poors analyst.

Sanders pledges to nominate government leaders who will stand up to Wall Street power.

Sanders cited evaluations paid for by Wall Street that led to mortgage-backed derivatives receiving triple-A ratings as a key cause of the crash. No more.

“Under my administration, we will turn for-profit credit rating agencies into nonprofit institutions, independent from Wall Street. No longer will Wall Street be able to pick and choose which credit agency will rate their products.”

Sanders finds it unacceptable that Americans pay $4 or $5 at the ATM and pay credit card interest rates as much as 20-30%. “The Bible has a term for this practice. It’s called usury. And in The Divine Comedy, Dante reserved a special place in the Seventh Circle of Hell for those who charged people usurious interest rates.

Sanders calls for a $2 cap on ATM fees and 15% maximum interest rate on credit card and consumer loans—the latter already being law for credit unions.

The lack of banking access by millions of low-income Americans often lead them to rely on extremely expensive payday loans that trap them in a cycle of debt. Sanders will fight to have community post offices provide banking services.

Bernie Sanders reiterated his position that the Federal Reserve should be responsive to ordinary Americans. “I think the American people would be shocked to learn that Jamie Dimon, the CEO of JP Morgan Chase, served on the board of the New York Fed at the same time that his bank received a $391 billion bailout from the Federal Reserve. That is a clear conflict of interest that I would ban as president.”

Sanders also wants to end the Federal Reserve paying interest to financial institutions, which has contributed to 1,000 times more banking reserves since the crash. The money could instead be loaned to small businesses to create jobs.

The presidential candidate reiterated his call to make the economy work for all Americans. “And so my message to you today is straightforward: If elected president, I will rein in Wall Street so they can’t crash our economy again,” he said. “Will they like me? No. Will they begin to play by the rules if I’m president? You better believe it.

“Thank you and I look forward to working with the most powerful force in our great nation—not the Barons of Wall Street, but the people our government was created to serve.”

What Will Americans Endure in This Presidential Race?