Donald Trump and Mike Pompeo know how to make other countries feel safe — and will punish them if they don’t agree.

When they are not morbidly tuning into the far more indigestible lessons to be learned from the latest spectacular mass murder, the American public and the pundits are busying themselves attempting to digest the largely indigestible conclusions from the midterm elections. But another international suspense story that kicked off the week — how the US will apply its new sanctions on Iran and its “secondary sanctions” on the rest of the world — appears to have faded from the public’s attention.

Despite so many distractions, the international drama around US sanctions on Iran continues to play out, as Europe in particular organizes its response. The ongoing drama has spawned some stunning examples of disingenuously distorted language to feed the appetite of The Daily Devil’s Dictionary. The current star performer, US Secretary of State Mike Pompeo, has been particularly creative in the past week. Those who have a feeling for the subtleties of political rhetoric will appreciate his effort.

The Guardian relates that although the US “has gained very few supporters” of its unilateral rejection of the Iran nuclear deal, Pompeo, unfazed by reality and proud of how many small nations the US has managed to bully, offered this extraordinary boast: “[W]e have built an enormous coalition to keep this world safe.”

Despite the belief recently expressed by former US Ambassador to Bahrain Adam Ereli, the European initiative to create as an SPV (special purpose vehicle) a clearing house designed to protect European companies wishing to do business with Iran from threatened reprisals by the US appears to be moving forward. Whether it will be effective remains to be seen, but Europe’s expressed motivation for making it successful is in itself significant.

The Guardian reports: “A failure to set up the SPV would be a humiliation for broader advocates of greater European economic independence from the dollar such as the French finance minister, Bruno Le Maire. Supporters of the SPV regard the imposition of secondary sanctions on European companies in pursuit of its foreign policy goals as an illegitimate demonstration of US economic imperialism.”

The main problem for European authorities lies in the fact that US policy is directed in their case against European private enterprises, rather than the governments who stand on international law to maintain their commitment to a treaty they signed. In other words, the US, in its latest McCarthyist incarnation, is threatening to blacklist private firms that violate its unilateral interdiction to do business with Iran by either impeding them from doing business in the US or threatening them with fines and freezing of assets. We mustn’t forget that these enterprises are in no way in conflict with the US and are incorporated in allied nations.

Pompeo’s invocation of a coalition takes us back to a moment in history few of us are too young to remember. In 2003, George W. Bush formally launched the notorious “coalition of the willing” to attack Iraq. The coalition consisted essentially of two and a half nations: the US, Tony Blair’s Britain and Jose Maria Aznar’s Spain, which left the coalition less than a year after the invasion when Aznar was unseated in an election. The coalition officially consisted of 43 nations, an impressive number, but the world knew the other 40 odd countries were simply the extras in a heavily scripted film with two leading actors, Bush and Blair.

Ambassador Ereli, cited above and in a previous column for his talent in combining optimism with cynicism, was already at work in 2004 reassuring the world that the coalition, although losing Spain, was reconfiguring itself “to contribute to stability in that vital part of the world” (the Middle East). Most people today are aware of how effectively the US and its coalition managed to assure that stability since 2004.

In a remake of Bush’s 2003 logic, Pompeo calls his coalition “enormous,” a marvelous way of appearing — like the envious frog in La Fontaine’s fable — to rival the size and significance of the signatories of the Iran deal, which include Russia, China, the European Union, Germany, France and the United Kingdom.

He also claims that the purpose of the coalition is “to keep this world safe.” His precision is exemplary: It is “this world” and not any other that he will make safe. The rest of the galaxy need not worry. “Keeping the world safe” is what all presidents have promised since Woodrow Wilson’s famous “make the world safe for democracy.”

“Safe” has come to mean: in conformity with the law of the empire. The message is simple: Don’t break our law and you won’t be punished. And it implies another message: Don’t try to act in accordance with your own laws. 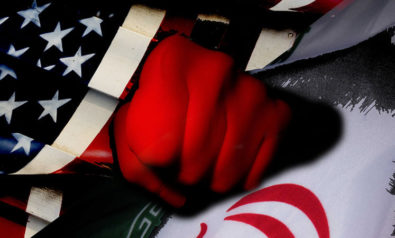 How Serious Is America When It Threatens Other Nations?