It has become so hard to be hopeful about America. Disappointment awaits around every corner and under every rock. Yet, there he is, Joe Biden, president of the United States of America, telling the nation that we can be so much better than we are and then having the guts to tell us what we need to do to get there. Other “leaders” have given it a try, but there was always one important thing missing. What makes Biden different than the others is having the political courage to tell the nation how we have failed to be what we have for so long told ourselves that we were and are.

I don’t know of anyone who predicted that this 78-year-old lifelong politician could seize the moment and grip the nation. But somehow, he has. It was to be expected that anything would be better than Trump, and Biden could have coasted on that alone. But that is not what is happening.

President Biden has used quiet confidence, competence, compassion and a solid moral foundation to propose the most progressive agenda in decades to try to lead Americans to where they didn’t know they wanted to go. Senator Bernie Sanders, among others, understood and articulated the problems and offered a vision of fundamental reform. Now, somewhat out of the clear blue, Biden may prove to be a leader capable of actually delivering some of that reform.

Biden Has More in Mind

After the election in 2020, there was much talk about the Biden who most thought to be a transitional figure, at best. But while we were talking to each other, it seems that Biden was actually telling himself and maybe a few others that he had much more than that in mind. Progressives like me didn’t even know he was listening to us. Maybe we had become so often disappointed that we never quite understood how far compassion and empathy can take someone when they are empowered with the opportunity to try to make a real difference.

To be clear, it will take much more than compassionate leadership to move America even slowly toward fulfilling its promise. It will take steady and competent administration officials and public servants committed to progressive ideals and then willing and able to turn ideals into public policy. It will take a united Democratic Party at all levels of government to both support and actively promote the policy initiatives. And then it will take President Biden to remind the whole nation that good people not only can accomplish good things, but that there is a moral imperative to do so now.

There will be no help whatsoever from Republican politicians at the national level, and the right-wing media apparatus will only ramp up its bile. Somewhere, around 70% of those who identify as Republicans still reject the reality that Biden is the legitimate president of the United States. With this in mind, Biden should ignore the national Republican Party and its acolytes until there is a clear and unequivocal affirmation of the results of the last presidential election from their political “leaders,” including the disgraced and seditious losing candidate.

In the current political environment, the most basic tenet of democratic governance continues to require repetition, so here goes: No one can be entrusted with democratic governance without a commitment to the democratic process, the rule of law and the resulting government. So, for all of you Republicans who still are waiting for Trump’s “triumphant” return and those who try to diminish the institutional significance of the insurrection that shook the nation, you have earned the right to be ignored. No nation can succeed at governance if those who do not believe in government continue to have a seat at the table.

I have some confidence that Biden knows this as well. And even more confidence that those counseling the president are exploring all of the realistic options to achieve their policy objectives. Further, they know that it will be imperative to negotiate with Democratic officials at all levels of government to increase broad public support for his progressive agenda.

There may also be some state and local Republican officials willing to sign on. However, Biden and his supporters will have to work much harder than they should have to in order to convince state and local Republican officials of the painfully obvious value of federal support for education, health care, child care, roads and bridges, better wages, affordable housing and the like. After years of local community neglect, most Republican officials still seem willing to reflexively resist any federal mandates, no matter how much those mandates might benefit their constituencies.

In this context, it will not be necessary to fix everything at once. However, it will be essential to initially restore a national faith in the capacity of government to meet collective societal challenges and to convince the nation that solutions to 21st-century problems require an actively engaged national government.

To succeed at this, Biden will have to directly address the most persistent element of resistance to collective national solutions — the perception that to implement policy changes beneficial to all requires that some give up a little individual “liberty” and a measure of individual “security.” There is only one cohesive response. It is that realizing a better America engenders a collective liberty that provides a more secure future for all of us.

This is what transformation looks like. Over the 40 years since Ronald Regan first stained governance with his disdain for the very government he was chosen to lead, much has been lost. A certain atrophy has set in that has often resulted in government failure, not because government can’t work, but because political leaders never trusted the institutions that were essential to success. It was much easier to find failure than the courage to fix it. And it was even easier to allow delusional waves of national greatness to mask a shameful level of collective despair.

If President Biden is to be transformational, he will need to convince a cynical nation that government is worthy of the trust needed to meet the challenges ahead. Then, he will need to fight for the resources required to meet those challenges and to demonstrate that we are writing a better chapter this time because we finally realize the distortion of previous chapters.

To write new and better chapters, the usual national distractions will have to be avoided. Two simple “truths” need to be emphasized. The first is that deficit spending is not a threat to needed reform, while resistance to paying taxes to meet public policy objectives is a threat. The second is that costly international adventures can only be avoided by accepting that “winning” is not a given. In both instances, simple cost/benefit analysis would serve America well and temper the hubris at the core of so much national angst.

Joe Biden may well be suited to rise above the exaggerated pride and self-confidence that has driven many of his predecessors to achieve far less than they could have or should have achieved and that has shattered promise after promise. Maybe Joe is the guy. I sure hope so. It is nice for the moment to feel like some of us are no longer walking alone. 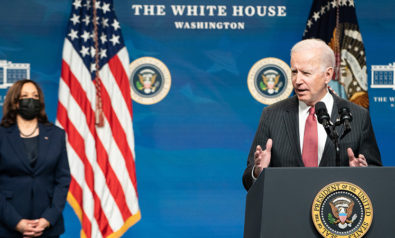 Biden Should Rejoin the Iran Deal Before It’s Too Late