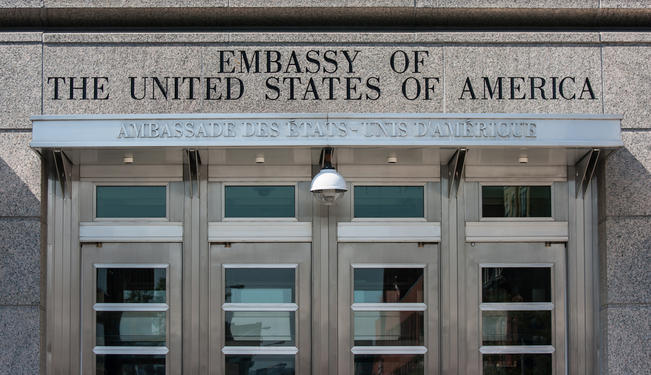 "While launching an international airlift of humanitarian aid to the former Soviet Union, US officials have contracted with a Roman Catholic agency to begin shipping food into remote provinces of Russia in the Far East. On Monday, US military planes began flying tons of food and medical supplies to former Soviet republics. The airlift is part of an international effort to speed humanitarian relief to the republics. At the same time, the United States has commissioned Catholic Relief Services to begin a long-term relief operation in the Russian Far East, which faces a serious food shortage" (Religious News Service, February 15, 1992).

The idea had been hatched a couple of months earlier. Sitting in my cubicle in downtown Baltimore, with my early morning smoke and coffee and staring at my map. Staring for such long periods of time and so intensely that I had imagined the paper burning along the crease, somewhere between California and Russia Far East.

I had all these bits and pieces of history rattling around in my mind. That great stretch of incubator from San Diego to Seattle staring up and across the Bering straits to the magnificent natural resources in RFE. The long history of  Russian and American pioneers venturing into each other's land over those same cold waters for over 200 years and now, the opportunity, just then materializing before my eyes, to transcend those Cold War red lines in the Bering Sea. Taken together, with time and a call from my boss, former Ambassador Pezzullo, they had all conspired to get me a  seat at the table with Secretary James Baker III.

And so it was consummated one very cold evening at the airport in Khabarovsk, in February 1992. Wrapped from head to toe in my Gortex, eyes like bulbs looking around the  ramshackle reception shed, surrounded in the dark by smoke  and rough men in thick furs wanting to take me to town.

Well, with time, we got the pipeline up and running. C-141s flying into Khabarovsk and ships of vegoil, milk powder and flour into Vladivostok.

But, here is the point of the story. During my time in RFE, I got to travel around freely. It was a place and a population in total free-fall. Streets lined with women selling anything that could fetch a penny — their toothbrushes even. The admiral of the Russian Pacific fleet, twisting my arm to get the US pipeline to go directly into his command. "My sailors have nothing to eat," he said. The quartermaster's store in Vlad was now a deep-discount shop for military gear. Hospital beds, where we were distributing humanitarian assistance, were being sold as metal scrap and shipped to South Korea to make razor blades — or some-such. The patients left on the floor.

But the punchline for this narrative was delivered by Vladimir, the driver who would take me back and forth from Khabarovsk to Vladivostok. Until recently, he recounted, he had been a tank mechanic at an armored division, located along the Amur river, a first line of defense against China. "We never had more than 10% of them working," he told me. "No parts, no fuel, and often not enough troops."

So, there it was. For us "boomers," dropping under our desks for air-raid drills since we were six; bomb shelters in our cellars, the Gulf of Tonkin, and the Domino effect of Soviet domination.

Somehow we suspected that when those C 141s crossed those red-lines for the first time in early 1992, bearing food and medicine, that it could not be over. That the military-industrial complex was not ancillary to America anymore; it had become its very fabric.

Or, more correctly stated, fear had become and would remain its very fabric. Today, our embassies overseas are fortresses; our overseas relations are now described more often by our drones. Nowadays, we hide under our desks each time there is untoward chatter on the airwaves. And as we fear to associate with the world around us, we grow our enemies proportionately. Seemingly, we lie in wait, provocatively, waiting for a reason to employ our terrible swift sword one last time and, by so doing, leave America as it was initially constituted, behind — once and for all. And for this purpose, terrorist is even more convenient than Commie.