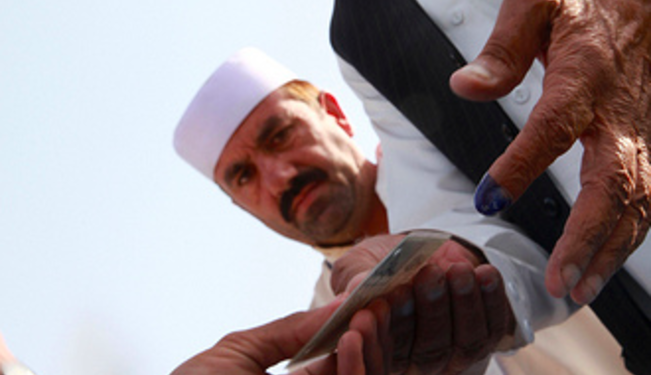 The theories that justify democracy assistance to transitioning countries have remained unchallenged for almost 50 years. In light of the recent upheaval in the Arab world, a revision is long overdue.

Public policies and aid directed at promoting democracy on foreign soil have been implemented for the majority of the 20th century. At present, when political upheaval in the Arab world has opened up communication with countries that have previously been out of reach, democracy assistance is a key topic among politicians and development practitioners. However, the national economies of traditional donor countries are marred by budget deficits and reduced economic growth, and the need for cost-efficient democracy assistance is pressing. Policy-makers who advocate for democracy assistance are to an increasing extent asked to promise tangible results, while using limited resources. It is therefore necessary to evaluate democracy assistance programmes to ensure they are as efficient and well designed as possible.

The United States and the European Union are the most important donors to democracy assistance both in terms of scope and budget, but the US has a longer history of providing it. This form of development aid was first granted in the 1960s; it stretched well into the 1970s and concentrated on Latin America, Asia and Africa. It was initiated due to the Kennedy administration’s reliance on classical modernisation theory and belief in America’s duty or even destiny to do good, and it led to the implementation of extensive economic development and military aid programmes overseas.

The second wave started in the 1980s under the Reagan administration. Democracy promotion became part of anti-communist policies and Latin America and Asia were still the main recipients. Finally, the third wave came when the Soviet Union collapsed. Although the aforementioned regions were still receiving aid, democracy assistance grew most rapidly in Eastern Europe and the former Soviet states. In addition, countries in Sub-Saharan Africa and the Middle East were added to the list.

Despite the considerable time gaps between these waves of democracy assistance, their theoretical model and rationale has remained largely unchanged for decades. There are countless examples of cases where the theory has been proven insufficient or wrong, but few attempts have been made to replace it.

Additions have been made to supplement the modernisation theory of the 1960s. With the third wave of democratisation beginning in the 1980s, a paradigm was developed to help explain how countries transitioned away from authoritarian rule and towards democracy. It grew to become a universal principle in the 1990s when even more countries started their move towards more democratic rule. Since then, the transition paradigm has guided American policy in this area although its categorisation simply implies that a very high number of countries are currently “transitioning”. A number of assumptions are made to support the transition paradigm, and according to democracy practitioner at the Carnegie Endowment For International Peace—Thomas Carothers—in most cases they do not describe reality.

In the transition paradigm, countries that move away from authoritarian rule are moving closer to democracy. This implies that there are only two pure forms of government and that any other form of government lies on a continuum between them. The idea of a continuum is brought further in a second assumption, which describes democratisation as happening in distinct stages or natural sequences. The opening stage refers to changes or cracks in the existing rule and is followed by the break-through stage. In this stage the old regime collapses and a democratic system emerges, with elections being held and institutional structures coming into place. The final phase of consolidation is when democratic forms turn into democratic substance, a slow process that aims to solidify the new system and its institutions.

With regards to underlying societal features, such as levels of socio-economic development, ethnic make-up, or political history, the transition paradigm typically disregards these features as minor bumps in the road that will be overcome once the democratisation process is underway. Democratisation is largely seen as a way of remodelling an already existing state, without taking into consideration that some areas have nearly non-existent state infrastructures.

Traditional democracy assistance based on the aforementioned theories is often designed as a top-down approach based on the conviction that poorly performing authoritarian or semi-democratic states need well-functioning institutions to develop into full-fledged democracies. It is intended to contribute to socio-economic development and the modernisation of state institutions, which may in turn lead to real political change. Furthermore, supporting slow but steady institutional reform and controlled phases of transition have been perceived as safer ways of aiding democracy abroad than unruly civil society movements, and this form of assistance is typically directed at the judicial and legislative branches of government.

There are alternative theories that support the promotion of democracy abroad and that may contribute to an increased focus on human resources and capital. According to development economist and Nobel Prize laureate Amartya Sen, democracy is the form of government with the highest potential for human development. His focus on individual freedoms, also known as the capability approach, has led to significant changes in how poverty and development are measured in international organisations such as the United Nations Development Programme. Both the Human Development Index and the annual human development reports published by the UN draw heavily on human development theory as the main framework for their assessments.

Sen views the expansion of political rights and civil liberties, both as the objectives of and means to achieving human development, which is often defined as the enlargement of people’s choices in areas of health, education, living standards, political rights and human rights. There are numerous examples of countries where the traditional measures of socio-economic development such as income per capita, or social measures like degree of urbanisation, are not sufficient to pinpoint levels of human development. Instead, democracy practitioners should assess governments and societies based on how constrained the freedoms of their populations are.

The ability to make free and unconstrained choices and exercise political rights depends not only on the formal rights granted to people, but also their capability to exercise these rights. To cast their vote in elections, they do not only need the legal right to do so. They may also depend on the availability of information about candidates, infrastructure to physically access polling stations, the possibility of leaving work to vote, and protection from being attacked or intimidated while participating. This capability cannot be derived simply from establishing or strengthening the right institutions. Although institutions are important for a well-functioning democracy, they are filled with the values and priorities of the people using them. The levels of corruption in state institutions are not automatically reduced by improving the efficiency and technical capacity of the people working for them. Moreover, so-called good governance programmes that aim to streamline economic policies and regulation may attract foreign investment but they rarely contribute directly to solving problems of democracy deficiencies.

Human development theory states that providing people with the freedom to participate in politics and civil society is the key to democracy. The steps from this insight to designing democracy assistance programmes that encompass this theory, produce tangible results, and keep donors satisfied, may seem long. However, the populations of countries like Tunisia, Egypt and Libya have crushed the last defence for the modernisation theory and the transition paradigm as bases for democracy assistance. Egypt and Tunisia are examples of modernised countries where considerable economic growth has taken place and yet they have been ranked as essentially undemocratic and corrupt. They serve as a striking example of how increases in GDP per capita and literacy rates alone cannot be assumed as indicative of democratisation. As long as the focus remains on these crude measures of wealth and modernisation rather than on the essential freedoms and capabilities of people, traditional democracy assistance does too little to deserve its name.