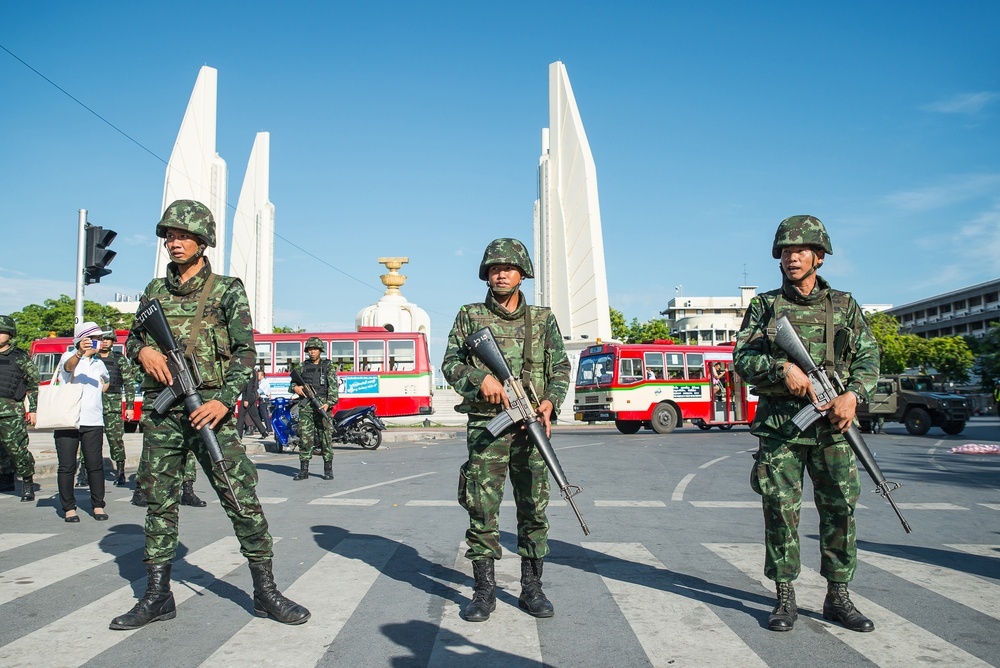 Thailand needs to learn from Turkey’s experience of military coups and political rivalry.

With the announcement of Thailand’s twelfth full-blown coup since 1932 on May 25, the country’s steady slide into paralysis and military rule is complete. It marks a new low for a country that was hailed only a few years ago as a beacon of stability and democracy in Southeast Asia.

At this low ebb, it is often instructive to step back and see what can be learned from history and comparative analysis. One country with a strikingly similar recent history — despite being apparently very different — is Turkey. So where are the similarities, what are the crucial differences, and what can Thailand learn?

There is much that is different about Thailand and Turkey. One nation is situated in Southeast Asia, and the other at the meeting point of Europe and the Middle East. Thailand is ruled by one of the world’s most popular and long-running royal dynasties, while Turkey has been a republic for almost a century.

However, the similarities encourage closer analysis. The almost untouchable nature of the king’s persona in Thai society has echoes in the veneration of the Turkish republic’s founding father, Mustafa Kemal Ataturk. What is more, both figures are held high by an entrenched urban elite. This elite has traditionally controlled the military, judiciary and bureaucracy.

But in the latter half of the 20th century, both nations experienced economic and social development that led to significant internal migration from provinces to urban centers. In the Turkish case, this was principally from provincial towns and rural areas of Anatolia into Istanbul and Ankara following industrialization efforts of the 1950s. In Thailand, internal migration was mainly from the rural northeast to the capital, Bangkok.

Both nations are also singular in their regions for having, largely, avoided the colonization experience of their near neighbors. This fact has been argued as contributory to their steadier and more successful development toward democracy and prosperity throughout the previous century.

Like Turkey, Thailand is a country that has developed to a stage beyond that of its immediate neighbors. As such, it has a population that will no longer accept strongman autocratic rule and economic stagnation quietly. An emergent opposition that is not only numerically superior, but also economically powerful cannot be stamped into submission.

The steady economic rise of a hitherto politically excluded, conservative and provincial population has had a dramatic impact for Thailand and Turkey. As economic growth has continued, so too have both nations moved steadily toward more representative democratic models. As a result, demographic realities have come into play.

Parties of the New Middle-Class

Turkey’s governing Justice and Development Party (AKP) may have been the latest in a long line of Islamist-oriented parties in the Turkish political landscape, yet they have much in common with Thailand’s Pheu Thai Party, who won successive elections on the strength of their popular support.

Both parties sprung from, and draw their core support from, the newly emergent entrepreneurial classes of the provinces, and those that have migrated from the provinces to the urban centers in the past two generations. Both exhibit a distinct brand of populist politics that appeals to this large constituency, whilst also offering them real economic and political power.

As a result, both have run hard up against the traditional establishment, which has been used to decades of rule on its own terms. In both cases, this has pitted a charismatic leader against that establishment, delivering for the old elite a central hate figure on which to hang all their frustrations. In Thailand, that figure is Thaksin Shinawatra, the now self-exiled founder of Pheu Thai. In Turkey, that figure is the prime minister, Recep Tayyip Erdogan, one of the founders of the AKP. Their differing fortunes say much about the differing paths of Thailand and Turkey.

Turkey’s establishment is no stranger to a coup d’état. Through the military, it has repeatedly curtailed democratic governments usually to suppress the rise of the more Islamist provincial political movements in the country. The judiciary has also repeatedly banned parties that are deemed a significant electoral threat.

What broke the cycle was the introduction of an external third element: the prospect of European Union (EU) membership. This economically and politically significant factor led to the steady reform and democratization of the Turkish system. Public support for the EU process helped to stop the military’s hand when the AKP swept to power in 2002.

Since then, this balance of power has led to the consolidation of the political class embodied by the AKP, and a fundamental shift away from the vested interests of the old elite — but only just. In 2007, the military tried to block the candidature of the AKP’s Abdullah Gul for the presidency and forced a general election, which the AKP won.

In 2008, the Constitutional Court came within a whisker of banning the ruling party, putting a severe dampener on its reformist zeal. Even in the past year, the establishment has been swift to turn any discontent — from the Gezi Park protests to the Soma mining disaster — to its advantage in an attempt to destroy the power of the new AKP-led political class.

By most reckonings, and for all the instability, Turkey’s military will not attempt to take matters into its own hands as it has in the past. This is largely because it knows the mass of the Turkish public does not want military rule. It is also because new economic realities make such a move unpopular with far more influential circles of society.

In its desperation to dismantle the political power of the class represented by Pheu Thai, the traditional Bangkok establishment is not only in danger of setting Thailand back a long way; it is also being hopelessly unrealistic. Like Turkey, Thailand is a country that has developed to a stage beyond that of its immediate neighbors. As such, it has a population that will no longer accept strongman autocratic rule and economic stagnation quietly. An emergent opposition that is not only numerically superior, but also economically powerful cannot be stamped into submission.

The strength of this newly empowered population is evident in the fact that, despite the 2006 coup that ousted him from power, Thaksin’s Red Shirt supporters have remained active on the streets, while he and his party have continued to wield popular support in Thailand.

Without the foresight to find accommodation with this new force in state institutions, the old elite risks losing everything in the long-run. The starkly differing fortunes of the British and Russian imperial establishments in the 20th century should be a lesson enough in that regard.

By adapting to the new political environment, Turkey’s old elites may well maintain many of their traditional privileges and economic advantages. Meanwhile, new cleavages will emerge in the rising middle-class, as has been witnessed in the intra-Islamist rivalry between the Gulen movement and the AKP.

If the Thai establishment does not learn from the Turkish experience and compromise with the new forces for change in Thailand, it risks short-term economic crisis and social unrest, and long-term insurrection that could sweep it away.