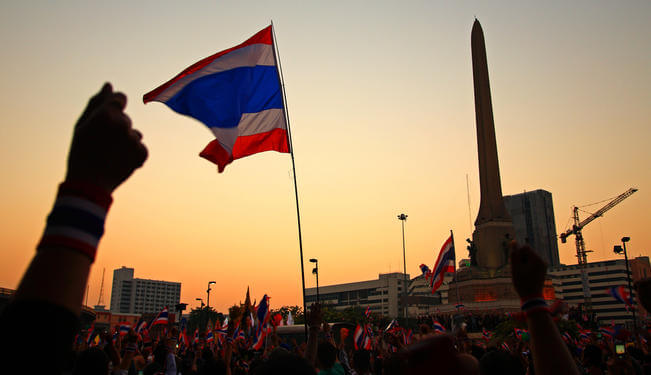 In Thailand, the judiciary appears ready to spring a new coup.

Since 2005, Thailand has been a divided country, witnessing resurgent waves of political pandemonium. The latest resurrection of such acrimony surfaced in November 2013, when once again, the country began to suffer mass demonstrations and it appeared the military might soon stage a coup. Of course, all of these pluralistic activities took place under a monarchy that seems to stand above politics.

The Rise of Thailand’s Juristocracy

Perhaps a less visible trend, which has grown over the last decade, has been the rise of Thailand’s judiciary. Indeed, Thailand today possesses a weakly-developed democracy with a strong, monarchically-endowed juristocracy that is undergirded by the armed forces. An embedded democracy possesses elections, political rights, civil liberties, and checks and balances as well as effective control over the military.

In such democracies, courts represent the rule of law and the ability of civilians to legally redress grievances. A juristocracy, on the other hand, comes to exist in a country where the judiciary achieves near or total supremacy over other political actors in a country. In Thailand, contemporary courts exert great power and are generally the tool of senior arch-royalists. This same judiciary is the final interpreter of the law. As such, it has been used to delegitimize recalcitrant political foes.

The 1997 “people’s” constitution enlarged and enshrined enormous powers for the courts and “independent” monitoring agencies across the political system. Thailand had never had such a strong, integrated architecture of legal bodies, and its creation owed to a deep desire in the country to control the corruption which many believed had spawned the Asian financial crisis.

Today, there are seven types of courts, including the most powerful — the Supreme Court and Constitution Court. Meanwhile, the most influential monitoring agencies have been the Electoral Commission, the ombudsman and the National Anti-Corruption Commission (NACC).

Different agencies have different powers, with the most influential being the Constitution Court. This court can force politicians from office, eject sitting governments, dissolve political parties and annul elections, among other things.

For a while, these bodies appeared to be a success. Until 2001, the courts and agencies seemed to be nonpartisan in their rulings, even when powerful, political leaders were charged. For example, the judiciary did not fear charging even a deputy prime minister with malfeasance in 2000. And the courts seemed to avoid political biases or corruption themselves.

Yet in 2001, following Thaksin Shinawatra’s landslide election victory, politics suddenly began to overshadow the courts. During that year, Thaksin was charged with concealment of assets, and the case went all the way to the Constitution Court.

Though the trial deemed him guilty, Thaksin was nonetheless acquitted by a slim margin of 8-7. Many alleged that political friends of the palace pressured the court to find the verdict in Thaksin’s favor.

Yet this court decision is the beginning of a trend. Indeed, throughout his 2001-2006 administration, Thaksin was able to place loyal cronies as commissioners of the monitoring agencies or even as judges in courts. On other occasions, Thaksin succeeded in intimidating these agencies to do his bidding. At one point, he even used the Anti-Money Laundering Organization (AMLO) to audit his political enemies.

Then, in February 2006, the Constitution Court rejected a petition to impeach Thaksin for conflict of interest — using private control over his Temasek corporation while he was prime minister and, therefore, using his office to get the best deal. Only after palace pressure did the courts finally annul the 2006 election.

The military’s 2006 coup, the voiding of the 1997 constitution, and the enactment of the 2007 constitution amounted to a sea change in court behavior. It shifted the judiciary from being influenced by Thaksin to being arch-royalist and opposing him. Indeed, one leader of Thailand’s military junta even admitted that the selection of post-2006 judges was based partly on whether they had anti-Thaksin sentiments.

Moreover, the 2007 constitution increased arch-royalist control over the method of selecting judges and monitoring agency commissioners. Prior to this, political party representatives dominated the selection process. After 2007, this cycle of appointing specific judges demonstrated a gradual buildup to a majority control over such selections.

It was not difficult to envision what the future would bring for such a powerful, insulated, anti-Thaksin judiciary. First, in December 2007, a pro-Thaksin government was elected to office. Then, in September 2008, pro-Thaksin Prime Minister Samak Sundaravej was forced from office by the judiciary for accepting a small amount of money to appear on a cooking show. By December 2008, the court ruled to dissolve the pro-Thaksin ruling party, as its executive members allegedly knew about incidents of internal party corruption.

As a result of this judicial “coup,” the incumbent government was forced from office and an anti-Thaksin government, cobbled together with help from the army and top judges alike, rose to power.

Meanwhile, two pro-Thaksin political parties were dissolved while the courts have never ruled against anti-Thaksin Democrats, despite several cases brought against them.

Under Thaksin’s sister, Prime Minister Yingluck Shinawatra, the judiciary has once again tightened its rein on elected members of parliament. In 2012, the Constitution Court issued an injunction against the legislature seeking to amend Thailand’s constitution.

The NACC has, meanwhile, indicted the 308 MPs and senators who voted in favor of amending the constitution to allow for an entirely elected Senate. If impeached by the NACC, they must step down from their positions. This includes cabinet members in Yingluck’s current caretaker government.

Meanwhile, the NACC has taken up the case of whether Yingluck and some of her cabinet ministers committed malfeasance by allowing a mismanaged rice-pledging scheme to continue. If the NACC impeaches them, they must also step down.

Finally, since Yingluck’s dissolution of the lower house on December 9, 2013, the Election Commission has been placed in legal administrative control until elections take place. The problem is that elections have failed to lead to the selection of a new prime minister. In addition, the anti-Thaksin Election Commission can effectively push the next vote forward for several more months — in time for the Constitution Court or NACC to pursue new cases against the government.

Ultimately, through persistence by the anti-Thaksin Constitution Court, the NACC and the Election Commission, their integrated relationship gradually whittles away the Yingluck government through a legal war of attrition. Eventually, the judiciary — through careful and slow steps — will inevitably oust the Yingluck regime.

Given the enormous influence exerted by the judiciary over Thailand today, what is it about the courts that keep them so powerful?

To answer this question, one must understand that Thailand’s judiciary is an integral part of an arch-royalist triumvirate that oscillates around the palace power. The triumvirate consists also of the military and the Privy Council, an advisory board that connects the palace to various hubs of state and society.

But in order to legitimize state actions and ensure arch-royalist interests, including the appointment or ouster of prime ministers, it is Thailand’s judiciary that matters most. In comparison, the military has seen diminished clout.

Indeed, military coups have lost their legitimacy in the 21st century. Where coups occur, it taints that country’s image: Thailand in 2006 was no exception. Consequently, militaries following coups tend to run for cover behind amnesty clauses that protect them from the courts.

Meanwhile, mass demonstrators have much less leverage — and legitimacy — than do the courts. Indeed, in March 2014, the Civil Court decided that the Yingluck government could not apply force against demonstrators to disperse them, in the event of peaceful demonstrations. Here one can see: It is the judiciary which prevented potential repression, not the demonstrators themselves. No demonstration in Thailand has ever led to a change in government.

Yet what happens when decisions by a proactive, anti-Thaksin judiciary continue to appear one-sided against Thaksin and Yingluck Shinawatra?

Eventually, as these courts and agencies persist in handing down legal decisions against the two, the majority of Thai people may refuse to accept what will be perceived as biased judicial jurisdiction. As a result, Thailand will experience escalating tensions, including either an army-led coup or a limited civil war.

At this stage, the judiciary appears ready to spring a new coup, though in several stages: void the February election; impeach Yingluck; impeach other caretaker ministers; and legally assist a “neutral,” appointed government to come to power.

And indeed, little by little, the government is being pulled apart by arch-royalists, as represented by the judiciary. The courts have been at the forefront of the anti-Thaksin campaign and have worn down the Yingluck caretaker government as best they can. While this arrangement may have assisted anti-Thaksin forces, it has deconsolidated Thai democracy, moving Thailand increasingly toward a form of juristocracy.