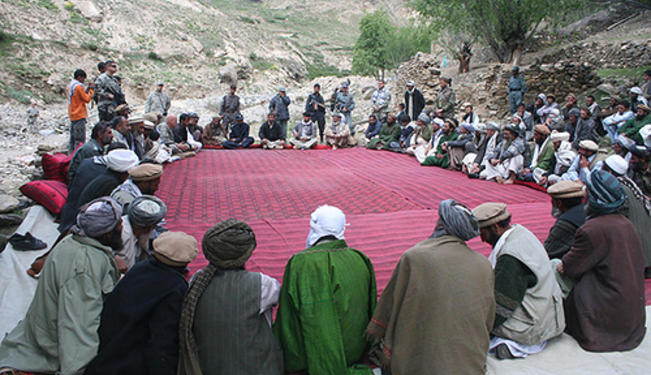 US forces’ burning of Qurans has demonstrated just how unwelcome the US is in Afghanistan.

The startling explosion of public rage across Afghanistan at the burning of Qurans by US forces, has shaken the already tenuous confidence in the Obama administration’s strategy for salvaging America’s core war goals while drawing down troop levels. It has also, even more thoroughly, exposed the fatuousness of the campaign strategy of Obama’s Republican challengers, who have denounced his withdrawal timetable as a give-away to the Taliban.

That timetable for leaving now appears farsighted. For it is plain to anyone with eyes to see that, for a large chunk of Afghan society, the alien troops on their soil are overstaying their welcome.

Most striking is the ease with which religious extremists, certainly including Taliban agents, could whip up a nationwide frenzy against “infidel” desecration of Islam’s most sacred scriptures. Conservative politicians in the Afghan parliament—whose jobs depend on the survival of the republic that Americans have been fighting to prop up—bellowed demands for the immediate departure of the foreigners.

More than 30 Afghans have been killed over the past week in riots over the Quran burnings—riots concentrated, significantly, in the northern regions where ethnic Pashtuns aligned with the Taliban are least numerous. The number of people who have turned out for the violent demonstrations has been relatively small—a few thousand across Afghanistan’s major cities, as conservative analyst Max Boot rightly notes. Only the tiniest handful of assailants actually turned their guns on their American allies over the past week—although a regional US command’s classified report had already expressed alarm over “a rapidly growing systemic homicide threat” from alienated Afghans’ attacks on allied trainers.

True, it seems to outsiders more than a bit disingenuous for Muslim firebrands to demand that crowds take to the streets to besiege NATO and United Nations facilities over burnt Qurans, when they have been mute about the many insurgent bombings of mosques filled with Muslims at prayer. Pakistani researcher Muhammad Nafees has documented that attacks by the Pakistani Taliban killed 1,238 worshippers in just ten years. A suicide attacker last August killed 54 people and destroyed a Quran in Khyber Pukhtunkhwa, but there were no street protests, no mobs storming insurgents’ safe houses.

Whether logical to outsiders or not, however, the fact is that infringements of ritual sanctity by non-believers are far more likely to motivate violent resistance in the region than infringements on Muslims’ lives by pious believers who wrap themselves in the mantle of Islam. Harvard analyst Steve Walt has succinctly explained the sources of long-simmering resentment against Western troops, who many Afghans believe harbor deep disrespect for their country’s people and culture.

The cell phone video of US marines urinating on the corpses of dead Afghan insurgents in January was the most recent of such incidents that provoked Afghan soldiers’ attacks on Western partners. In that case it was four French soldiers who paid with their lives for an American unit’s contemptuous disrespect for the dead.

There are only a few quantifiable measures of deepening disenchantment with the foreign troop presence, even in areas under the Afghan government’s firm control. The Asia Foundation’s remarkably detailed annual surveys have found a distinct souring of mood toward the foreign troops recently. The 2011 survey finds that twice as many Afghans report having experienced violence from foreign forces as from insurgents—an abrupt reversal of prior years’ findings. It is the presence of foreign forces that is now the most widely credited explanation for the persistence of the insurgency (cited by 21% of Afghans), rather than the Taliban’s desire to regain power (18%) or the support the Taliban get from Pakistan (7%), which previously ranked higher.

So even if the opposition to the foreign troop presence was still far short of a majority last year, the trend line was already headed in the wrong direction. Before this winter’s successive incidents, 60% of Afghan respondents thought the Afghan National Army still needed the support of foreign troops. The window thus should still be open to help President Hamid Karzai’s government secure itself—but it may not be long before Afghans’ tolerance for their foreign guests is exhausted.

After a rocky week of rage, Karzai has been able to calm the furore over the Quran burnings, citing at every turn the letter of apology for the incident from President Obama himself. This makes all the more bizarre the hysterical chorus of outrage from Obama’s opponents—outraged not by the sacrilege, but by the apology. Most of these continue to imagine that the United States can keep fighting the war indefinitely, regardless of what the Afghans (much less Americans) might want.

The peculiar US political debate this past week—focused on an apology for an inexcusable blunder, rather than on the long-term viability of prosecuting the war—can only be described as surreal. While conservative candidates and commentators sputtered, conservative-leaning experts and ex-officials acknowledged that Obama’s apology was prudent and essential, and that the tricky task of transition to Afghan control has to be managed with even greater finesse. And, while not to many conservatives’ tastes, Obama’s turning to the even trickier task of trying to negotiate a long-term peace for Afghanistan is even more crucial.

Hidden in this hubbub over the desecration of holy books was the remarkable discovery of two Bibles in the rubble of Osama bin Laden’s demolished compound in Abbottabad. While the sacred books were battered in the process, the highlightings their owner had made on key texts were still clear.

*[This article was originally published by Blog of the Century.]