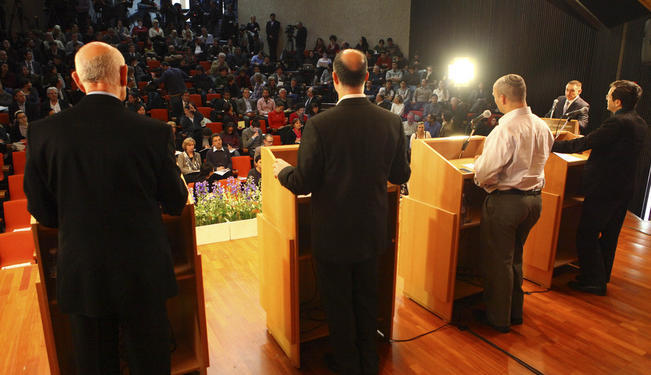 With polls predicting an overwhelming win for the Israeli extreme right, Israel would be entering a point-of-no return, kissing the chances of peace with the Palestinians goodbye, argues Rajai Masri.

The reputable British broadsheet, The Independent, ran an article on January 2, 2013, by Alistair Dawber, on the upcoming Israeli elections dubbed: “Naftali Bennett: The Zionist pin-up blazing a trail ahead of Israeli poll.” The article spoke of an election whose outcome would see the Israeli extreme right – which one can term the racist xenophobes – win the majority of seats as they did four years ago.

To give force to the looming fact of an Israeli electorate moving further to the extreme right (which would see intransigence on any future moves for peace; aggressive programs of Jewish colonization of East Jerusalem and the West Bank; instituting more apartheid and segregationist laws against Palestinian-Israelis inside the Green Line; and tighten the screws on the starvation siege imposed on the people of Gaza), the central theme of Dawber's article focused on the rising star of a neophyte 40-year-old Israeli contender in the elections. His name: Naftali Bennett.

Bennett is the head of an extreme right-wing party, the Bayit Yehudi (Jewish Home). He and his party are expected to come second after the Likud-Yisrael Beiteinu coalition, as indicated by polls. Notably, the Jewish Home party is expected to win 16 out of the 120 Knesset seats.

What’s really interesting, or rather truly frightening, is the fact that Bennett and his Jewish Home party are making their advances on a political platform that outdo both Binyamin Netanyahu’s extreme right Likud Party, and the most repugnant, openly racist Avigdor Lieberman's Yisrael Beiteinu.

As an observer, I have for long reached the conclusion that Israel is moving further to the right, as I commented on the last Israeli elections in an article dubbed: “A View From Jerusalem: Piecing Together a Peace That Cannot be had.” Writing from Jerusalem, at the time, it was only two weeks before Israel launched its war on the starved and besieged Gaza with advanced US weaponry which killed over 1,400 people, including more than 400 Palestinian children.

In the conclusion of the article, I lamented the mockery of the so-called Palestinian Authority’s “Peace Negotiations” with the then government of Ehud Olmert:

“Israel is increasingly turning inward: mentally, psychologically and physically. The Apartheid Wall that Israel is building to enclose the so-called Green Area — including Israel proper, the large settlements around Jerusalem (more than 250,000 settlers), and other expropriated land in the West Bank — all point to a new larger ghetto. Israel [will eventually] isolate itself [from] all its neighbors; yet worse, much worse, from [the rest of]the world as the [international community] increasingly converges around common universal values and [the] upholding of human rights.

Israel, the large ghetto, militant and ever insecure [nation], is the Sparta that neighboring Arab countries, [who] bury their heads in the sand, will one day wake up to the reality of its insecurity and xenophobia as an ultimate mode of self-destruct[ion]; especially in a world of appeasement."

At the end of 2012, it was reported that Israel had constructed the largest number settlements in the Occupied Palestinian Territories. During the past 5 weeks alone, and immediately after the hoopla of the UN vote to grant the Palestinians non-member observer state status at the General Assembly, Netanyahu’s government approved the construction of thousands of new Jewish settlements in and around Occupied East Jerusalem. This will virtually cut the West Bank in two, completely separating East Jerusalem from the rest of the other Occupied Palestinian Territories. Recently, it was further revealed that Israel has plans in the pipeline to construct in the coming few years, 58,000 new Jewish homes in the West Bank that would make the Jewish settlers in the Palestinian Territory sprout to close to a million inhabitants.

Interestingly, with the announcement of new planned settlements have been the vicious and undeterred acts of vandalism and outright attacks on helpless Palestinian homes in the environs bordering the rising Jewish settlements. A number of small Palestinian villages, such as Qusra and Burein, environs of Nablus, recently came under attack by Jewish Orthodox settlers uprooting centuries old olive trees and assaulting Palestinian villagers; all before the eyes of the regular Israeli Defense Forces.

This leaves a rational and a reasonable observer so bewildered with the nagging questions:

· Could this be what the Jewish religion has deteriorated into with Israeli settlers posing as its guardian?

· What type of peace negotiations does the West envision as they continue to urge the Palestinians to engage in talks; with an Israel bent on active programs that are fast changing demographic facts, and geographical realities in the Occupied Territories?

· How could one negotiate with an Israel turned colonialist?

One also wonders about the incompetence of a Palestinian Authority and its non-elected head, Mahmoud Abbas, and an Israeli polity completely immune to any diplomatic and political pressures.

The outlook looks bleak and the Palestinians are faced with hard choices and opportunities that appear to be slipping away fast: the slim chance for future peace in the Land of Milk and Honey.