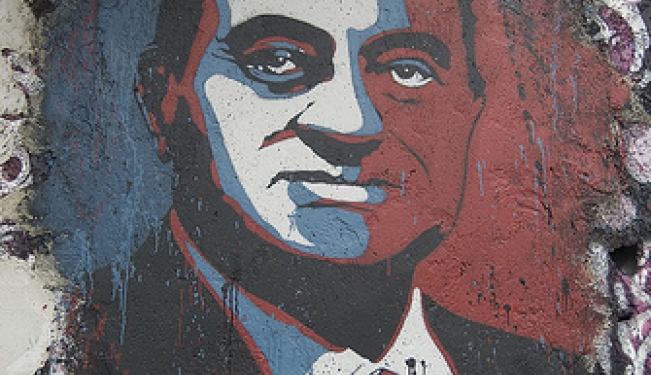 The Libyan Revolution ends whilst the Egyptian one continues.

Many Egyptians are not happy about the achievements of their revolution. The youth, socialist and liberal activists, and even the Islamists despise the continuity between the post-revolutionary military government and the former Husni Mubarak regime. Somehow they think that the presence of the old president has not entirely vanished.

Indeed, Mubarak did not resign, did not flee like Zine El-Abideen Ben Ali, the former Tunisian president, and he was not the victim of an armed assault like Ali Abdullah Saleh, the Yemeni president. Mubarak simply disappeared from the public scene on February 11, leaving power to the Council of the Armed Forces (SCAF). For months, many Egyptians thought that he was still leading the country hiding behind the facade of the ruling Council.

Arguably, the ‘Arab Spring’ has been a popular attempt to re-gain the public domain. For instance, the Egyptian revolts have been carried out mainly through an occupation of public spaces. Protestors took control of Tahrir Square, the Parliament, the National Democratic Party (NDP) buildings, the State Security, (Amn el-Dawla) and the State TV (Maspero).

In Libya, the revolution led to the physical elimination of the body of Colonel Muammar Gaddafi, whilst Mubarak was left untouched. Indeed, Egyptians were more tolerant of their former leader, as opposed to the view many held of the former Libyan dictator, one which effectively sealed his fate. The Egyptian people always stressed the difference existing between Mubarak and his more colorful neighbor, Gaddafi. In recent months, many Egyptians had accused the Colonel of making mad speeches stating that his blindness led to foreign intervention to solve the conflict.

However, nobody ever considered the 83 year-old former president of Egypt a particularly charismatic figure. Even still, Mubarak acquired the reputation of legendary longevity, particularly after escaping an assassination attempt in Addis Abeba in 1995. His palace in Heliopolis has been an unreachable stronghold for years: a mythical place portrayed in popular movies as the house of the ‘great father’. Earlier this year, the slogans of the revolutionaries forced Mubarak to ‘close the doors and turn off the lights’. The ‘Pharaoh’ is not in power anymore, and is now suffering.

In recent months, Mubarak’s lawyers have spread daily news about his frequent heart attacks in an attempt to humanize him. When faced with the image of this sick ‘grandfather’, some Egyptians ask themselves if this is the same man who dismantled the social reforms of Gamal Abdul Nasser and created a widespread system of State Security and repression, one who paralyzed the political participation of opposition figures and the growth of the country’s economy. Others see the presence of the former president as a threat to a true democratic transition.

Many Egyptians want to settle the score, but the body of the former president is still hidden and invisible, unlike Gaddafi’s, which was on ‘display’ for all to see following his death last month. In a sense this is nothing new — Mubarak’s body was never a public object. Before his trial started last August, Mubarak had last appeared in public in 2010. In recent years he rarely participated in official events, with the exception of military parades. This avoidance of the public, together with the news of his frequent medical treatments in Germany, had led many to think that the succession to his son Gamal was close at hand.

Now that his health deteriorates daily, Egyptians are divided on the views towards their former leader. On one hand, the videos showing a sick Mubarak on a stretcher have evoked thousands of conservative, liberal and former members of the NDP to openly affirm that they did not want this end for their past president. On the other hand, this attempt of emotional ‘national reconciliation’ confirms the fears of many demonstrators, who outraged by the way in which the State TV criminalizes new protests and the decisions made by the SCAF to postpone the presidential elections until 2013.

Today the destiny of the former president is uncertain, and this period of transition is provoking a series of reactions among the youth activists. Many for instance, fear that nostalgic supporters might use the recent sectarian disorders to demonstrate that Mubarak was a source of national cohesion. His supporters still portray the previous regime as the only way to heal Egypt's political divisions.

The presence of Mubarak is clearly problematic. However, when bearing in mind the events that took place in Libya in October, we are faced with a difficult question, one which is directly tied to the fates of historical leaders. Was the massacre of Benito Mussolini in Loreto Square necessary? Was the execution of Nicolae Ceausescu and his wife unavoidable? Was it important to see the bleeding Gaddafi being slapped by a handful of rebels in Sirte?

After Anwar al-Sadat was assassinated in 1981 by a member of the Al-Gam’ah Al-Islamyya (the Islamic Group), Egyptian people learned that violence is not the way to resolve the problems of a country. Certainly, violence is not necessary to ignite a potential transition towards democracy, as the Arab Spring has demonstrated particularly in Egypt.

Mubarak has been defeated, perhaps even more effectively than other Arab dictators. He has been debased and deprived of all his privileges, while his family has been imprisoned. According to his lawyers, when Mubarak saw the video of his Libyan counterpart being slapped and wounded by the rebels, he burst into tears. Was he scared that the same might happen to him? Did he wish that the same would have happened to him, instead of facing trial? It is hard to say. All we know is that the old president is, in a sense, already dead. His body, however, is still not part of public property, and hopefully never will be.