While the Islamic State makes war on the world’s vast majority of “moderate Muslims,” hard-liners in the West pretend they don’t exist.

In the 13th century, the Italian town of Lucera was a Muslim island in a sea of Christendom. Here Frederick II, the head of the Holy Roman Empire, established his own shadow cabinet of scholars and advisors from among the Arabs that he invited to live in this walled city near the eastern coast of Italy.

It was a bold, unconventional move during a precarious time in Christian-Muslim relations. The Fifth Crusade had failed to retake Jerusalem. In Iberia, however, Christians had nearly taken back all of al-Andalus from the Muslims by mid-century. And in Sicily, Christians were persecuting the Muslims who remained from what had once been a thriving emirate before Norman mercenaries destroyed it in 1071.

Lucera was thus both refuge and reservation. Karen Armstrong, a religion scholar, writes in Holy War: “Yet though Frederick certainly enjoyed Lucera and his Arab friends there, this was a policy not of toleration but of exploitation. Lucera was certainly a city where Islam was tolerated and protected: Frederick would not allow papal missionaries there to harass the Muslims. But Lucera was also a refugee camp and a reservation. The Muslims had to live there and had no choice but to be loyal to Frederick because he was their only protector.”

Lucera, in other words, was the very definition of a gray zone. It was an enclave of Muslims in Europe who were more or less prospering. It had official support from the authorities in the person of Frederick II. But many Christians considered the city an outpost of the enemy.

A gray zone, according to the Islamic State (IS), is a place where Muslims have rejected an “us-versus-them” world of belief and unbelief that puts the caliphate in the right and the “crusader coalition” in the wrong. From the perspective of IS, the Muslims who live in predominantly Christian realms have to make a choice: They can drop everything, travel to Raqqa and take up arms on behalf of IS. Or they can stay in the enemy camp. IS intends its bombings to make it more and more difficult for Muslims to choose the second option, because they’ll find their stay in “crusader countries” increasingly inhospitable.

A year ago, before the coordinated attacks in Paris, an article called “The Extinction of the Gray Zone” appeared in the English-language newsletter of IS. It lays out the stark choice available to Muslims in Europe: “Muslims in the crusader countries will find themselves driven to abandon their homes for a place to live in the Khilāfah, as the crusaders increase persecution against Muslims living in Western lands so as to force them into a tolerable sect of apostasy in the name of ‘Islam’ before forcing them into blatant Christianity and democracy.” 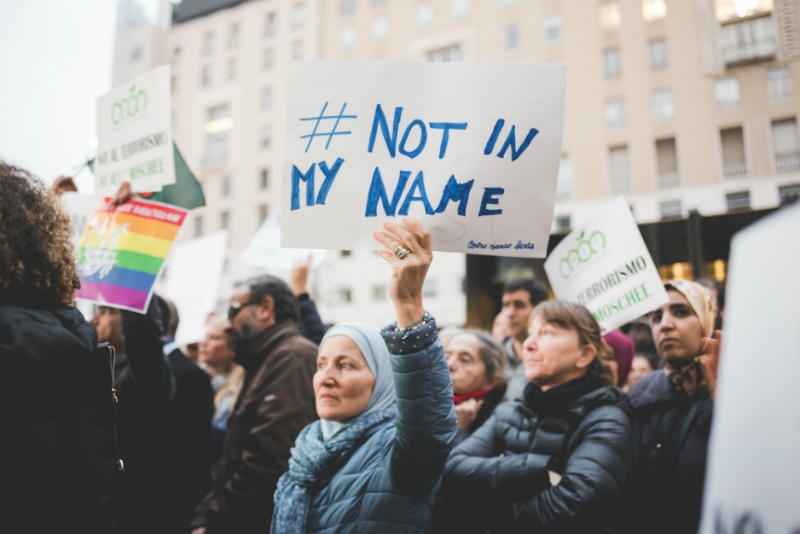 IS, in other words, views all forms of Islam that don’t correspond to its own peculiar Salafist interpretation as not only apostasy, but as way stations on the road toward the ultimate abandonment of the religion.

The nationalist backlash against Muslims in Europe—represented by Pegida in Germany, the National Front in France, or the UK Independence Party in Britain—has a similarly suspicious view of Islam in Europe. These Islamophobes view European Muslims not in transition toward Christianity and democracy, but on their way to becoming sleeper cells for the Islamic State.

For both IS and the Islamophobes, the gray zone represents an intolerable state of ambiguity, engagement and political debate where people freely adopt multiple identities. To be simultaneously Muslim, French, European, a doctor, a woman, a parent, a voter: This is anathema to the extremist. They care about one identity only: Are you on our side or not?

As much as anyone could in the 13th century, Frederick II was a man of the gray zone. He was, to be sure, a leader of the “crusader coalition.” But he also spoke Arabic. He consulted closely with the scholars of Lucera. He even included Muslims in his armies. Perhaps most importantly, he managed to retake Jerusalem not by force of arms, but by successfully negotiating a treaty of peaceful coexistence with Meledin (Sultan al-Kamil) that turned over several lands to Christian control. The deal on Jerusalem preserved access to religious sites for both Christians and Muslims.

For his efforts to work with Muslims, among other subversive activities, Frederick II was deemed the “anti-Christ” by Pope Gregory IX and excommunicated four times. Then, as today, collaboration with Muslims was a tricky business. As for Lucera, French armies under King Charles of Anjou wiped out the Muslim enclave in 1301, killing the Muslim inhabitants and turning the mosque into a church. Christian Europe wouldn’t see another such gray zone for many centuries.

From the perspective of Israeli Prime Minister Benjamin Netanyahu and most of the US political establishment, Gaza is not a gray zone. It’s a green zone—that is, an area controlled by Hamas, and therefore a hotbed of radical Islam.

Although Hamas came to power through the ballot box in 2006—solidifying its control by ousting its rival Fatah in 2007—it has endured political isolation courtesy of the international community and an economic blockade courtesy of Israel (and Egypt). The green flags of Hamas have become a symbol—for the countries that would prefer that the Palestinian party didn’t exist—of violence, intolerance and non-compromise.

It might come as a shock, then, to discover that the Islamic State views Hamas very differently. IS disparages Hamas as too pacific, tolerant and willing to compromise. It’s called for Palestinians to overthrow Hamas because it prioritizes secular goals (national liberation) over religious ones (expanding the caliphate). A video posted on June 30, 2015, featured three IS fighters lecturing the authorities in Gaza: “The point of jihad is not to liberate land, but to fight for and implement the law of God.”

Hamas, in other words, doesn’t rally around the black flag of the Islamic State. Its green flag isn’t a symbol of uncompromising extremism. Rather, Hamas is firmly in the gray zone. 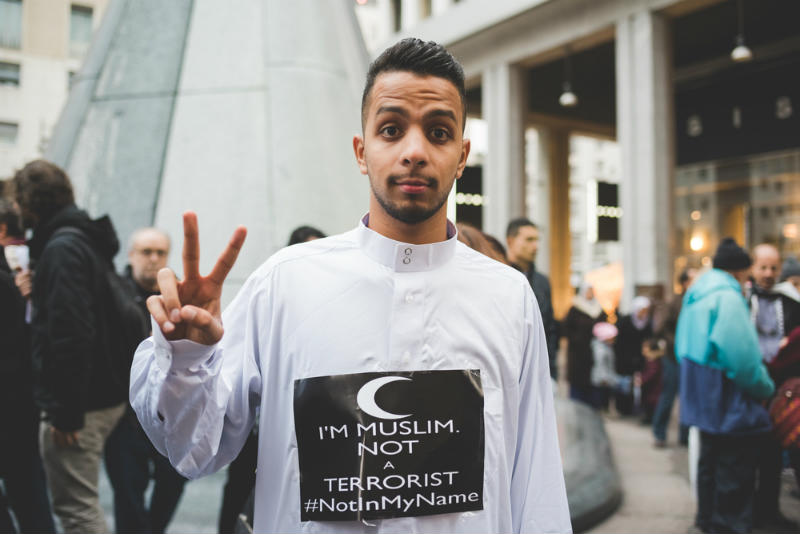 As Sarah Helm writes in a fascinating article in The New York Review of Books, Hamas reacted immediately to the video by cracking down on IS, arresting supporters, picking up bearded guys at checkpoints, and shutting down suspicious social media sites. IS responded by bombing Hamas and initiating attacks against Israel.

Here’s the kicker: The less likely a two-state solution becomes—thanks to Netanyahu and his right-wing minions In Israel—the more attractive the caliphate grows. This logic applies all the more to Palestinians who have returned to Gaza after fighting in Syria. “Some of the returnees openly switched allegiance to the IS caliphate,” Helm writes, “calculating that viewed from the rubble of postwar Gaza, the prospect of a caliphate might seem more realistic than a Palestinian state.”

For Israelis who don’t want a two-state solution, Hamas was a godsend. Look, they could say, it’s clearly impossible to work with such a ruthless and uncompromising partner. Hamas was a deal-killer—for a deal that Israeli extremists considered deeply flawed.

When confronted with the possibility of the Islamic State ousting Hamas in Gaza, a realist would immediately open up negotiations with the latter in order to prevent the former from seizing power. But Netanyahu and company aren’t realists.

If the Islamic State took over in Gaza, it would set back Palestinian aspirations for yet another generation—and that would be music to Bibi’s ears. He could then launch military operations in Gaza against IS, and a grateful international community would applaud. Such Machiavellian calculations prompted Israel several decades ago to secretly support Islamists in Gaza—who would eventually create Hamas—in an effort to counterbalance Yasser Arafat and his secular Fatah movement.

As in the Middle Ages, extremists on both sides are cooperating to eliminate the gray zone.

Counterterrorism is out; “countering violent extremism” (CVE) is in.

CVE has become the strategy of choice inside the Beltway. The White House convened a three-day summit on the topic in February 2015. The Department of Homeland Security has adopted a new CVE approach, thanks to authorizing legislation from Congress. There was even a global youth summit devoted to CVE in September to coincide with the meeting of the United Nations General Assembly.

The idea behind CVE is to prevent people from becoming terrorists in the first place by nipping radicalization in the bud. But given the veritable explosion of violent extremism over the last year—with IS-linked attacks on virtually every continent—it would seem that CVE is no more effective than its predecessor. Perhaps it has nothing to do with the validity of the CVE techniques themselves.

Rami Khouri hones in on the fatal flaw of the approach: “These efforts, which typically emanate from U.S. or other Western political institutions, see political violence as only a reflection of extremist values or behavior that are anchored in Arab-Islamic societies. They refuse to see the causal influence of Western policies in this grim cycle of global violence. Violent extremism, it turns out, is the consequence of policies of Western and Middle Eastern states, and radical changes by both are required to stem the problem.”

It turns out, then, that extremists on both sides are not the only ones responsible for extinguishing the gray zone. In addition to their IS targets, US bombs destroy towns, political institutions and civilians. In the midst of all this destruction, the only thing left to do is pick up a gun and fight—with us or against us.

CVE is failing for the same reason that President Barack Obama’s speech in Cairo in 2009—on pushing the reset button on relations between Islam and the West—didn’t ultimately rescue the reputation of the United States in the Muslim world. Bombs, alas, speak louder than words. And bombs, whether they come from above or below, are the enemy of the gray zone.