The country with the highest per capita infection rate of COVID-19 is in South America — but it isn’t Brazil. Chile, despite its high incomes and access to resources, has struggled to keep the pandemic under control and suffers from infection rates higher than the United States, which currently leads with the highest number of total coronavirus cases in the world. What the pandemic has done is highlight one of Chile’s biggest problems — income inequality.

Mortality rates in Santiago’s public hospitals are twice that of the nation’s private hospitals. However, those with fewer resources in Chile have been marginalized from the elites in the nation’s capital long before the virus. A highly privatized economy has allowed many to fall through the cracks, bringing millions of Chileans to the streets in protest in 2019. To close this gap, economic, social and educational reforms are required.

What Is Driving the Protests in Latin America?

The Chilean government is aware of the discontent among its citizens. In 2006, 800,000 students took to the streets, with subsequent protests in 2008 and 2011 in response to the rising costs of higher education. Then, in October last year, a 4% subway fare increase sparked nationwide protests that brought over a million Chileans to the streets of Santiago, the largest protest in the country’s history. The 2019 protests have resulted in at least 30 deaths and 11,000 injured. Human rights organizations have reported incidents of torture, sexual abuse and assault by Chilean security forces.

The government of President Sebastian Pinera has responded with various reforms, such as a middle-class stimulus package, early access to pensions as well as a promise of a vote on a new constitution. Chile’s current constitution was written in 1980, during the 17-year military dictatorship of General Augusto Pinochet, furthering the need for a new democratic framework. The Chilean government must make good on its promises if it is to shake its place as the most unequal among the Organization of Economic Co-operation and Development (OECD) countries.

The virus has disproportionately affected Chile’s poorest citizens, who often live in densely populated areas and do not have the luxury of working from home. Speaking to The Guardian, a university professor commented, “What are people in poor rural communities supposed to do with online yoga and cooking classes?” Chile must reach into its savings and provide immediate relief for those who are struggling. A stimulus package that benefits low-income populations should be implemented immediately.

In the long term, Chile must reverse its stance on fiscal prudence. Savings can help mitigate recession, but Chile’s conservative fiscal management is its Achilles’ heel. Chile offers very few social services, ranking second only to Mexico in social spending among OECD countries. Even water is a private commodity. However, Chile has taken actions that indicate less austere policies may be coming. The lower house of parliament voted to allow Chileans to dip into their private pensions to provide immediate COVID-19 relief. President Pinera announced a 1$.5-billion middle-class stimulus as well. This is a positive step, but more funds must be directed to the country’s poorest citizens.

“One Bread per Person”

Looking to the long term, educational reform must be prioritized. Public schools in Chile are underfunded, while private education is often unaffordable. Average annual college tuition in Chile is $7,600 — approximately half of the median income and among the highest in the world; only American private universities and British universities have higher tuition rates adjusted for income.

There have been efforts to reduce public university costs, such as when the gratuidad system was introduced in 2016. While the program mitigated university costs for low-income students, it has reduced funding for public universities. For public universities to be competitive with their private counterparts, funding is critical. Not only is an improved education system perhaps the most important factor in reducing inequality, but it is something that Chileans have been asking of their government for over 15 years.

A government directly addressing public needs amidst protest is not a given. But there should be optimism for a better, more stable Chile. It is important for the country to push forward with the drafting of a new constitution. Otherwise, the capacity for further violence and unrest will remain. The late Chilean poet Nicanor Parra said it best: “There are two pieces of bread. You eat two. I eat none. Average consumption: one bread per person.” 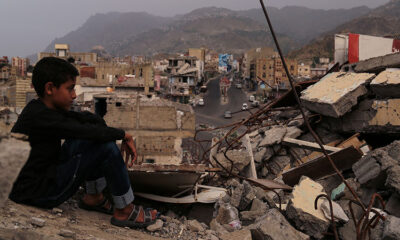 The World Must Not Forget Yemen